Please ensure Javascript is enabled for purposes of website accessibility
Log In Help Join The Motley Fool
Free Article Join Over 1 Million Premium Members And Get More In-Depth Stock Guidance and Research
By Daniel B. Kline - May 17, 2018 at 6:39AM

The company held its first-ever investor conference in Shanghai, and revealed a five-year plan to double its footprint in the world's most populous nation.

Starbucks (SBUX -1.58%) is accelerating its growth plans in China, with a goal of opening nearly two stores there every day. The coffee chain intends to add 600 locations a year in the world's most populous country. And, with 100 new metro areas on its expansion list, customers will be able to grab a caffe Americano in 230 Chinese cities by the end of 2022.

These efforts, which are only part of the brand's plan for its second-largest market, would give it about 6,000 stores there by the end of 2022 -- twice the number it has now. The company expects its operating income from China to double over that time fame, and its revenue to triple.

"No Western company or brand is better positioned to evolve with the rapidly expanding Chinese middle class – and we continue to mindfully evolve a coffee culture in China where the reward will be healthy, long-term, profitable growth for decades to come," said CEO Kevin Johnson in a press release. "We are committed to long-term investment in China." 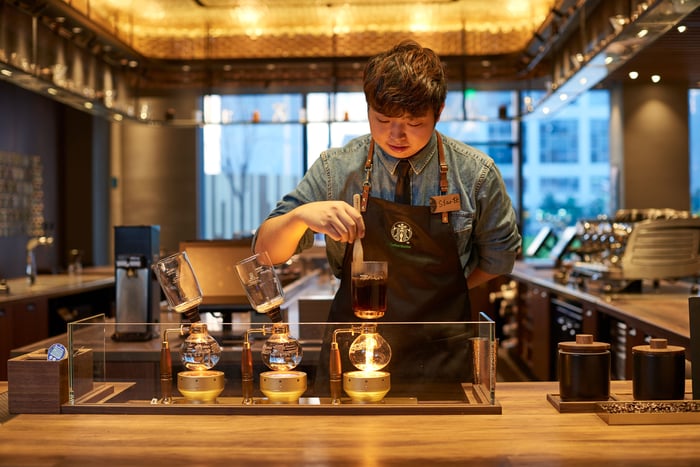 Starbucks has been opening a store every 15 hours in China. Image source: Starbucks.

It's about more than stores

While adding locations remains the key part of the Starbucks expansion plan in China, the company also has big plans for its bottled, ready-to-drink beverages, which are distributed in grocery chains, convenience stores, and vending machines.

Between now and 2022, the company plans to bring its ready-to-drink line to more than 400 cities and 125,000 distribution points across China. However, Starbucks won't just be transplanting its U.S. offerings there: In June, it plans to introduce a chilled cup product unique to China. The new line, which will come in four flavors, will join its Doubleshot products, which are already available there.

Starbucks also plans to expand its single-serve presence in China through its new global partnership with Nestle. That recently announced deal will bring Starbucks coffee to the Nespresso and Nescafé Dolce Gusto machines.

Starbucks' mobile app and its associated loyalty program have been significant growth drivers in the U.S. market. That's been true in China as well, where nearly 7 million loyalty program members have used the chain's app within the past 90 days.

The company plans to grow that audience by rolling out new features including personalization, mobile order and pay, and delivery service. It has also expanded its "Say it with Starbucks" social-gifting feature beyond its initial home on WeChat, bringing it to Alibaba.

What's noteworthy about Starbucks growth strategy for China is that the company is not simply attempting to take what worked in its home market and transplant it directly to a new one. It's adapting its strategies to the country's unique needs and tastes.

In some cases, those changes are as simple as tweaking its beverage lineup to offer flavors and drinks designed specifically to appeal to Chinese consumers. But the chain has also worked to address cultural differences. For example, it's offering its Chinese employees critical-illness health insurance for their parents -- a perk that isn't found in its U.S. benefits packages.

By taking a slower approach to embracing the Chinese market, Starbucks has avoided some of the mistakes that have tripped up other Western brands. There may yet be stumbles now that it's accelerating those growth plans, but for now, the chain looks poised for significant gains in China.