Please ensure Javascript is enabled for purposes of website accessibility
Log In Help Join The Motley Fool
Free Article Join Over 1 Million Premium Members And Get More In-Depth Stock Guidance and Research
By Jamal Carnette, CFA - May 18, 2018 at 5:18PM

The company's latest move points to a runway of growth for Amazon.

Like many brick-and-mortar retailers, it's been a tough path for Chico's FAS (CHS 5.85%). Over the last five years, shares of the clothier are down about 40%. The difference has been a shift from consumers away from store-based retail to e-commerce -- most notably in the form of Amazon.com (AMZN 3.60%).

In a nascent but growing trend, retailers are deciding that if you can't beat 'em, join 'em. As a result, they're collaborating with companies like Amazon to immediately improve their e-commerce operations. Count Chico's FAS as the next big brand to seek out such a partnership. 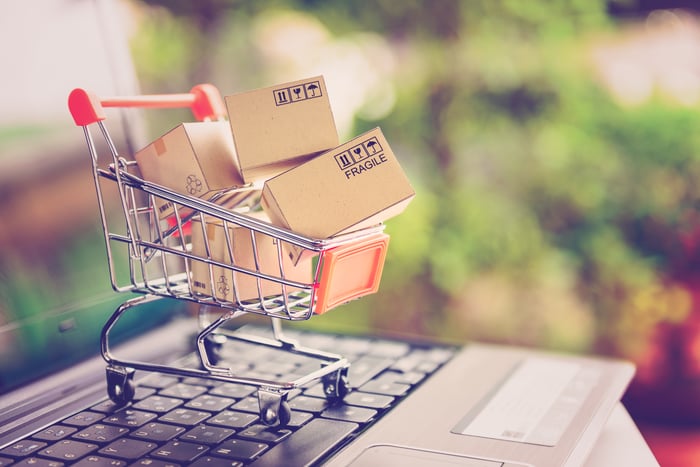 Chico's recently announced a partnership with Amazon, bringing its merchandise to the massive online marketplace. Plans are to make the apparel eligible for Amazon Prime, which includes free two-day shipping. While the initial partnership will only include jewelry, athleisure, and limited Chico's brands, the company plans to eventually bring its Soma line of lingerie and its White House Black Market upscale collection to the mix.

Amazon's partnership has worked for Adidas

Amazon has been working to add name-brand apparel retailers to its site. The company has started a tentative relationship with Nike to bring its line of shoes and apparel to Amazon.com. In doing so, Nike joins Adidas (ADDYY -1.97%) as an Amazon partner -- and not a moment too soon as the latter had gained significant footwear market share in recent years, pushing past Nike's Jordan brand to become the No. 2 brand in sports footwear.

Adidas' growth has been accomplished via unconventional methods. It has focused less on performance footwear and more on lifestyle brands -- embracing non-athletic partnerships with rapper Kanye West and American model and TV personality Kendall Jenner. The company has also sought out new sales channels like Amazon. Recently, Adidas called Amazon "a very good customer of ours" when referencing the three-year relationship.

Amazon is the clear winner here

While Chico's may benefit from the relationship in the short run, Amazon investors should be encouraged by the continued migration of brands from competing with Amazon in e-commerce to partnering with it.

Perhaps the biggest misconception about Amazon is it has no room for growth due to its large market cap. The reality is that e-commerce is still in its early stages, only accounting for just over 9% of total retail spending in the fourth quarter of 2017. However, e-commerce continues to grow rapidly, posting a 17% year-over-year increase that same quarter.

Now, it's possible the company could dominate even more of the growing e-commerce industry as more brands decide to offer their products through its site.