Adidas has a simple plan for success.

Adidas (ADDYY -5.31%) took the second place position in North America's athletic apparel and footwear market over a year ago, surpassing Under Armour (UA -8.31%) (UAA -9.77%) and hasn't looked back. The company posted impressive growth this quarter taking share from competitors, seemingly immune to the challenges in the retail market.

2014 was a challenging year for Adidas in North America with the company posting full-year declines of 4% despite a strong sporting goods market, and it lost the number two spot in North America to Under Armour.  The board of directors knew that to be a successful global brand, the company needed to win in this region, which represents 37% of the global sporting goods market. In June of that year, Mark King was appointed the president of Adidas North America with the mandate to get back to double-digit growth. He was given latitude to change long-standing practices that were impacting the region.

One of the first steps King made was to have a regionally focused advertising campaign. Adidas had been running one global campaign per year, and King ramped that up to quarterly with sports that mattered to the region, such as (American) football, baseball, and basketball. The company hadn't previously invested in these sports and moved to sign "hundreds" of players.

King also moved the region's design team out of the European headquarters to Oregon. King felt that having a locally focused design team with an "American viewpoint" would help the brand connect better with its consumers. King's design team was given full creative license and even allowed to depart from the classic prominent three stripe logo.

In addition to running and basketball, the design team focused on athleisure, or what Adidas calls "Originals." This line has been a growth engine in the region and posted 20%-plus revenue gains in the most recent quarter along with NEO, a sub-brand aimed at capturing the style-minded youth market.

Regionally focused design efforts and expansion into athleisure, all supported by locally relevant brand marketing has been a winning formula for Adidas. This approach has propelled the company solidly back into second place in this important market. 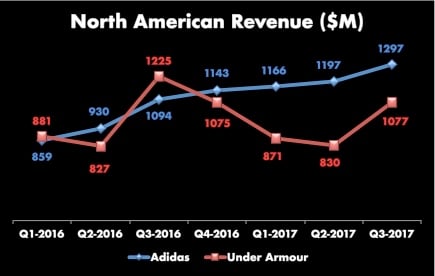 The Adidas brand grew a strong 31% in North America the most recent quarter, and even with the drag of a declining Reebok brand, the overall company grew 23% in the region.

This is even more impressive considering the challenges in the retail market and Nike and Under Armour posting revenue declines of 3% and 12% respectively in the most recent quarter. Adidas CEO, Kasper Bo Rorsted, talked about what drove the stellar results.

I think the best way of mitigating promotional activity is to bring cool products into the marketplace and investments in the brand. And I think it sounds very simple but that is really the core of what we're trying to do and full price sell-through.

Adidas is able to sell its products at "full price" when other competitors are having to discount, which demonstrates Adidas has earned pricing power. This undoubtedly has been driven by the brand building actions the company took over the last several years and is now a powerful advantage that can be used to drive growth going forward. 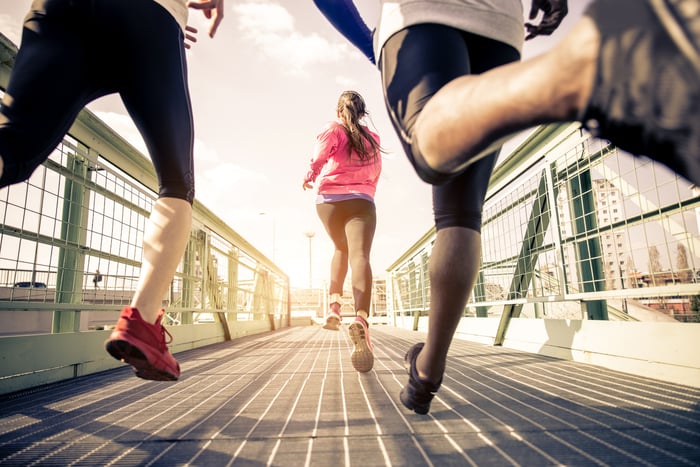 While management was pleased with the results this quarter, Rorsted explained they are not yet satisfied with the position Adidas has in the region.

So despite the fact that we've had 3 or 3.5 good years in the U.S, we need to recognize that we are in catch-up mode, and we are not at a market share position that we are aiming at. I believe, in previous calls, we have set a minimum market share. In a large country, it should be around 15%. And we're not there yet at that stage.

The company has achieved a double-digit market share in sneakers, but it has its sights on continuing to grow all aspects of the business in North America with a focus on improving e-commerce, women's apparel and footwear, and getting the Reebok brand back to growth. With momentum, pricing power, and the consumer on its side, Adidas won't be giving up its second place position anytime soon.