Please ensure Javascript is enabled for purposes of website accessibility
Log In Help Join The Motley Fool
Free Article Join Over 1 Million Premium Members And Get More In-Depth Stock Guidance and Research
By Rich Smith - Updated May 23, 2018 at 12:36PM

Shares of copper and gold miner Freeport-McMoRan (FCX -6.64%) were sliding this morning, but don't be fooled: The news on Freeport today is good, not bad.

Yesterday evening, fellow mining company and Freeport partner in Indonesian copper mining Rio Tinto (RIO -4.26%) said that it is in discussions to sell its stake in Indonesia's Grasberg copper mine. Unconfirmed reports put the price at $3.5 billion. For Rio Tinto, this move promises to free up cash for deployment into more promising ventures. But the news has significance for Freeport, as well: According to analysts at B. Riley FBR, the price Rio is contemplating helps to affix a value to Freeport-McMoRan stock -- an attractive price, enough so to win Freeport-McMoRan an upgrade to buy. 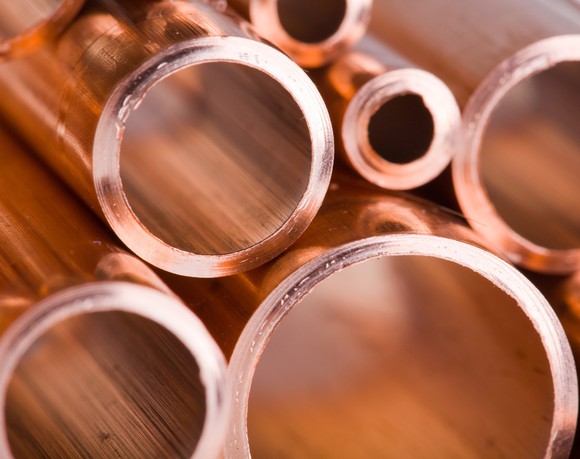 Freeport-McMoRan owns the vast majority of the Grasberg mine in Indonesia -- roughly 91%, with the remaining 9% owned by the Indonesian government, and it's an important asset. As fellow Fool.com contributor Reuben Gregg Brewer explained earlier this month, Grasberg provides roughly a third of the copper that Freeport mines in a year, and essentially all of its gold. Recognizing the value of the asset, the Indonesian government is moving to take control of Grasberg, insisting that Freeport and Rio sell it enough shares to take a controlling 51% ownership interest.

Now, Freeport's joint venture agreement with Rio Tinto entitles the latter to half of the JV's 40% share of production from the mine, effectively giving Rio Tinto a 20% stake in the mine. By selling this stake to Indonesia, Rio will get the government basically halfway to its goal of 51% ownership, such that Freeport should only have to divest about 22% more to give the government its desired level of control.

Thus, Rio's move helps to ensure that Freeport will continue to benefit substantially from the mine's production going forward.

How much is that "what" worth?

That's one plus for Freeport from today's news. Here's another: Rio Tinto's rumored price of $3.5 billion for its stake in Grasberg helps to affix an "attractive valuation marker" on Freeport-McMoRan's stake, as B. Riley explains this morning in a note covered on TheFly.com. It also helps us to determine whether Freeport's stock is attractively priced.

Here's how the math might work: Assume Rio Tinto's sale to Indonesia of an effective 20% interest in Grasberg goes forward at the price of $3.5 billion. Logically, if 20% of Grasberg is worth $3.5 billion, then the remaining 70%-odd that Freeport currently owns should be worth at least three-and-a-half times $3.5 billion -- roughly $12.25 billion. (The stake may be worth even more than that, as it comes with control of the mine.)

Of course, all of Freeport-McMoRan stock combined currently sells for a market capitalization of just $24.5 billion -- or only about twice the value of its Grasberg stake.

Granted, Grasberg is important to Freeport. We've already established that. But is it worth half the value of the company?

Probably not. According to data from S&P Global Market Intelligence, Freeport's operations in Indonesia contribute less than half the company's profits, and only 27% of Freeport's revenue. This implies that the rest of Freeport -- the parts that aren't called Grasberg -- are currently being undervalued by the stock market. This is one reason, I imagine, that B. Riley is now upgrading the shares and assigning a higher target price of $20, or about 18% more than they fetch today.

I admit I've had my doubts about Freeport-McMoRan. When Freeport poured billions of dollars into an ill-timed, poorly thought-out, and shareholder-unfriendly decision to buy a big stake in oil production in 2012, I lost faith in management and sold my shares.

That said, under new management Freeport has extricated itself from its oil debacle and refocused on its core competency in minerals mining. Rio Tinto's exit from Indonesia opens the door to Freeport securing its future in that country, and helps to ensure Grasberg will remain a valuable asset for years to come -- at the same time as it helps us to affix a value on Freeport-McMoRan stock.

At a share price currently less than 13.5 times earnings, and a projected earnings growth rate in the low 20% arena, think B. Riley may be onto something here: Freeport-McMoRan stock looks cheap.