Please ensure Javascript is enabled for purposes of website accessibility
Log In Help Join The Motley Fool
Free Article Join Over 1 Million Premium Members And Get More In-Depth Stock Guidance and Research
By Daniel Miller - May 23, 2018 at 8:17AM

Longtime bulls turn bearish, and one Detroit automaker could be severely undervalued, according to a couple of Wall Street analysts.

There's been a very clear and consistent message from Wall Street when it comes to automakers: Out with the old, in with the new. That message was confirmed as Tesla (TSLA -3.79%) rushed onto the scene and was one of the hottest stocks over the past few years. Meanwhile, legacy automakers such as Ford Motor Company (F -2.75%) were practically left for dead. After years of Tesla love and Detroit auto hate, two analysts are changing their tune -- here's what investors need to know. 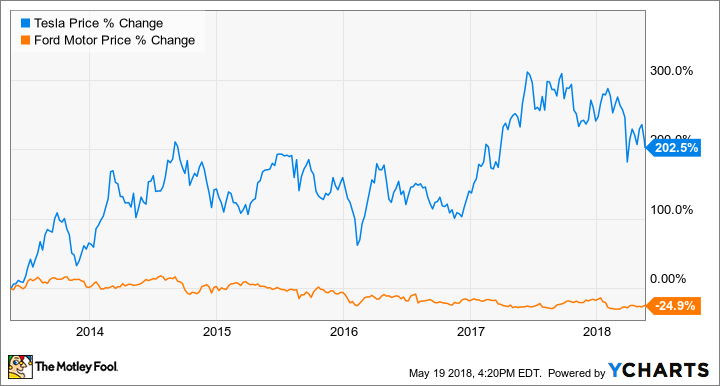 Wall Street's love affair with Tesla hit a minor speed bump with CEO Elon Musk's abrasive treatment of analysts on its recent quarterly conference call. Surely analysts will shake off the bizarre conference call and continue business as usual, but in an unrelated event, Morgan Stanley analyst Adam Jonas slammed on the brakes of his Tesla opinion last week. Jonas had been Tesla's premier bullish voice on Wall Street and longtime advocate of the company's enormous potential. Until this week, that love affair hadn't faltered. Jonas made eyebrow-raising cuts to his price target on Tesla from $376 to $291, which is a large enough move to make anyone say, "Whoa."

While Jonas noted that Musk's strange first-quarter conference call was unlikely to change investor sentiment, there are still many concerns. Jonas noted that manufacturing issues with the Model 3 caused him to reduce earnings estimates despite volume target forecasts remaining mostly unchanged. However, Jonas also believes the Model 3's below 25% margin performance will be a long-term battle -- not a temporary one as Tesla suggests. More specifically, Jonas lowered the long-term auto gross margin forecast from 34% to 27% and the long-term operating margin forecast from 14.3% to 9.8%. That's a major issue for investors, especially as Tesla continues to burn through cash. Not only does the Morgan Stanley analyst believe that Tesla will have to raise capital, but he upped his estimated need from $2.5 billion to $3 billion.

For investors who have long found relief in Jonas' endless Tesla optimism and bullish sentiment, this was a stark change in tone.

On the flip side of Tesla's less enthusiastic note from Jonas was Ford, which finally received a couple pieces of good news. In addition to news that Ford will restart production of its highly profitable F-150 pickup after a supplier bottleneck, J.P. Morgan believes the time to invest in Detroit's second-largest automaker is now. "We believe Ford is in the process of pulling the trigger, or soon to pull the trigger, on walking away from previously core but loss-making aspects of its business," J.P. Morgan analyst Ryan Brinkman wrote to investors, according to TheStreet. "We suggest investors pull the trigger on Ford shares now, as its earnings -- and its multiple -- are likely to inflect higher as it undergoes this transformation."

During Ford's first-quarter conference call, CEO Jim Hackett defended the company's recent decision to vastly reduce its sales focus on passenger cars in favor of more lucrative SUVs and trucks. Hackett said he believes there to be a 50% upside in Ford's share price simply by discontinuing certain aspects of its business. J.P. Morgan largely agreed and reiterated its overweight rating and its $15 per share price target -- a significant premium to its May 18, 2018 $11.33 closing price.

Stocks go up, stocks go down, and analysts will have endless opinions about where the price will go at any given time. That's especially true in the automotive industry: a capital-intensive industry filled with uncertainty and on the cusp of evolving rapidly toward a driverless vehicle future. By no means should a change in an analysts opinion completely change whether you buy or sell a stock, but analysts changing their views on Tesla and Ford might make you re-evaluate your original investment thesis and make sure the long-term points are still intact.