Please ensure Javascript is enabled for purposes of website accessibility
Log In Help Join The Motley Fool
Free Article Join Over 1 Million Premium Members And Get More In-Depth Stock Guidance and Research
By Daniel Miller - Updated May 10, 2018 at 4:06PM

Here's what investors need to know about Ford's F-Series shutdown and just how much it could cost second-quarter profits.

Bad news for investors: Ford Motor Company (F 1.71%) said production of its bread-and-butter F-150 and Super Duty pickups will be halted due to a fire at a supplier. Ford investors aren't alone in this pain as General Motors (GM 1.35%) and Fiat Chrysler Automobiles (FCAU) also said some production would be disrupted. Not only do investors have to deal with plateauing sales in the North American market, but developments such as this or perhaps an unforeseen recall deter investors from owning automakers. But just how much could this cost Ford?

That number -- 287,295 -- is how many F-Series trucks Ford has sold through April in 2018. Those nearly 300,000 F-Series trucks account for 37% of all Ford brand unit sales through April, and it represents one of the few bright spots in a portfolio littered with year-over-year declines. Consider that the company's total cars segment is down 14% through April compared to the prior year and even its SUVs are down 3.6%. The only segment with an uptick thus far is trucks, with a 3% gain compared to the prior year. In fact, Ford's F-Series recorded its 12th consecutive month of year-over-year gains in April, in addition to posting its best April performance since 2000. 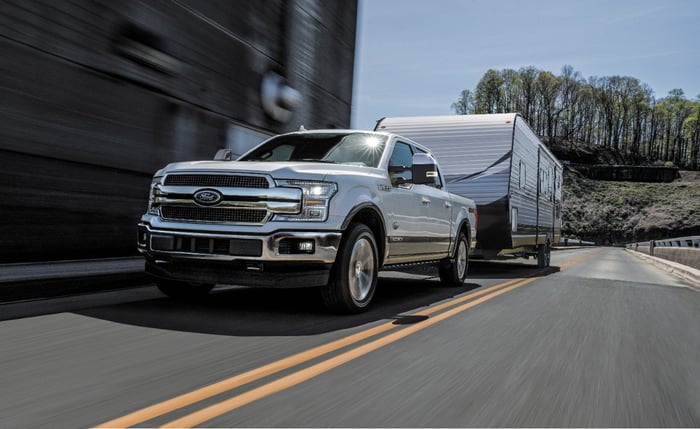 Put simply: If there's any considerable downtime for its bread-and-butter truck lineup, it's bad news for its top and bottom line during the second-quarter. But just how much? Joseph Amaturo, analyst at Buck Research, commented in a note Wednesday that a two-week production halt for the F-150 could trim as much as $310 million from Ford's second-quarter profits. When you consider Ford's 2017 second-quarter generated $2.5 billion in adjusted pre-tax profits, you can understand the urgency for management to get production back up and running.

Ford idled F-150 production at its Kansas City plant until May 14 and also halted Super Duty production at both its Kentucky Truck and Ohio Assembly plants. The good news is that Ford had 84 days of supply of the F-Series lineup at the end of April, which will provide some buffer if the production is halted longer than investors would like. It's also true that Ford could make up some of the production gap by shortening its typical summer shutdown.

"We do expect Ford will incur higher production costs during this shutdown period and potentially in the period immediately following the shutdown to the degree Ford elects to accelerate production to make up for this shortfall," wrote James Albertine, an analyst with Consumer Edge Research, wrote in a note to investors, according to Automotive News.

Investors must have faith that management can offset most, if not all, of the downtime, but this does emphasize a risk investors will have to accept going forward. At a time when Ford has decided to nearly cease selling passenger cars in the U.S. market going forward, any large disruption for its bread-and-butter F-Series will have an even larger impact on quarterly results. That's life in the auto industry in 2018, and it's not for the faint of heart.