Please ensure Javascript is enabled for purposes of website accessibility
Log In Help Join The Motley Fool
Free Article Join Over 1 Million Premium Members And Get More In-Depth Stock Guidance and Research
By Daniel B. Kline – May 24, 2018 at 6:04AM

They're still stuck in last place among all the business categories the American Customer Satisfaction Index ranks.

People like their cable companies and internet service providers (ISP) less than they did last year -- and they didn't like them very much then either. In the American Customer Satisfaction Index's (ACSI) recently released 2018 telecommunications report, the overall score for the ISP category fell to an all-time low, while that for subscription television services (cable and satellite) dropped to an 11-year low.

"Streaming services don't have the hidden fees and six-month rates that subscription TV does, not to mention they're cheaper and simpler," said ACSI Managing Director David VanAmburg. "But because consumers don't have many options when choosing a subscription TV provider, those businesses don't see a lot of risk in customer dissatisfaction, and we're unlikely to see dramatic changes any time soon." 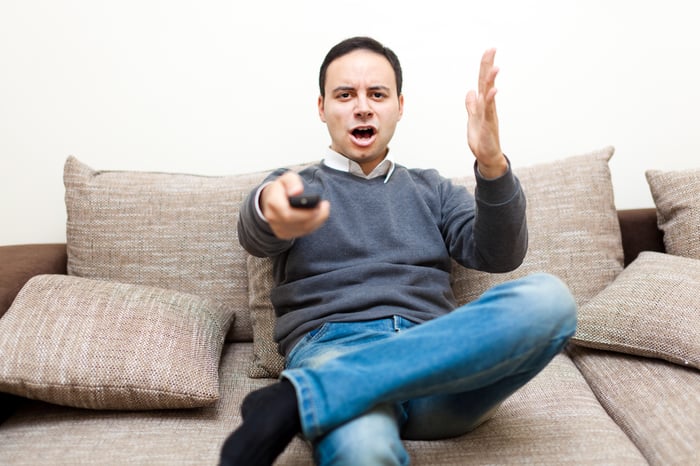 The numbers are pretty dismal

Cable and internet providers were the worst-ranked categories among the 46 industries and 10 economic sectors the ACSI reports on -- and by a wide margin. In pay television, AT&T (T -2.48%) and DISH Network (DISH -5.57%) were the only two companies to not lose ground this year, though neither of them gained, either. Charter (CHTR -3.52%) and Altice USA (ATUS -5.57%) were the biggest losers on the customer satisfaction front, with 8% declines. 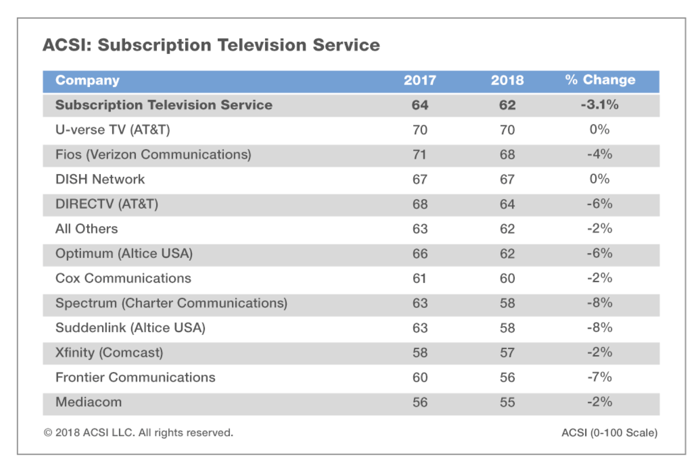 On the internet side, the results were equally dismal. Only Comcast (CMCSA -2.60%), which ranked in the lower half of providers, maintained its 2017 score. Every other company of any size in the space lost ground. Again, Charter and Altice posted 8% drops, but they were slightly beaten -- if that's the right word -- by last-place Mediacom, which saw its customer service score fall by 9%.

"If you look at retail, airlines, and many other industries, companies like to reward customer loyalty, offering perks or discounts for doing business with them," said VanAmburg. "Telecom is the exact opposite. In many ways, loyalty is punished because subscription TV is focused on customer acquisition and offering the best deal to lure customers away from competitors. In the long run, that doesn't leave customers very satisfied." 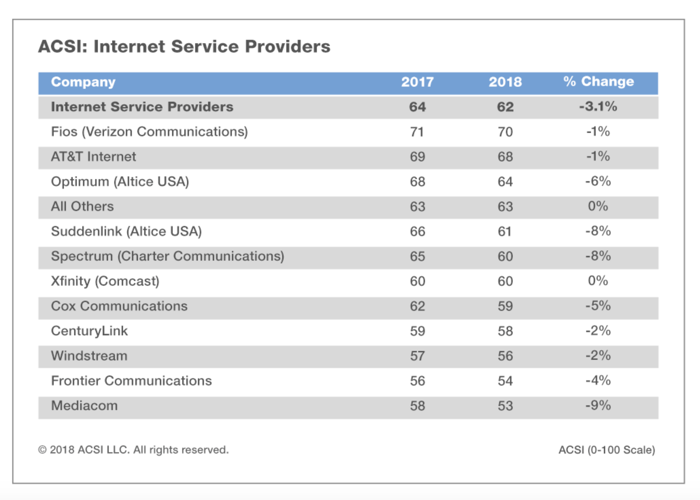 A wide competitive moat -- for now

Consumers have few options if they want to leave either their cable or internet provider, or both. They may be able to cut the cord with their television provider, but more than half of Americans only have one choice when it comes to an ISP, according to the ACSI.

It's worth noting that the three streaming services tied for the highest rating with scores of 78 -- Netflix, Sony's PlayStation Vue, and Amazon's Twitch -- all are run by independent companies, not services offered by cable providers. Hulu, which is partly owned by Comcast, scored a respectable 75, while DISH Network's Sling TV (71) and AT&T's DirectTV Now (70) ranked near the bottom.

Cable companies have been losing pay-television subscribers, but they've more than made up for that by adding broadband customers. Essentially, the lack of choice within many markets when it comes to ISPs has given the major players in this space little reason to offer better customer service.

However, counting on that lack of competition may prove a short-sighted strategy if viable alternatives to the current broadband players emerge. Given that all the major wireless carriers are building 5G networks that could provide comparable data speeds to broadband, and that technology companies such as Alphabet and Facebook are at least dabbling in offering internet service, the moat protecting the cable and broadband incumbents could evaporate abruptly in the next few years.

John Mackey, CEO of Whole Foods Market, an Amazon subsidiary, is a member of The Motley Fool's board of directors. Daniel B. Kline has no position in any of the stocks mentioned. The Motley Fool owns shares of and recommends Amazon and Netflix. The Motley Fool has a disclosure policy.