Please ensure Javascript is enabled for purposes of website accessibility
Log In Help Join The Motley Fool
Free Article Join Over 1 Million Premium Members And Get More In-Depth Stock Guidance and Research
By Keith Noonan, Keith Speights, and Nicholas Rossolillo - May 25, 2018 at 8:10PM

These three stocks could beat one of the world's e-commerce giants.

Jack Ma, Peng Lei, and a team of sixteen other partners co-founded Alibaba (BABA 2.64%) in 1999 and would go on to shape and dominate China's online retail market in the years that followed. The company was eventually taken public in September 2014, setting a record for the world's largest ever initial public offering (IPO) with a roughly $230 billion valuation for the company at market close. Today, Alibaba has a market capitalization of roughly $500 billion, and the strength of its online-retail network, momentum in Chinese e-commerce, and expansion into high-reward categories like artificial intelligence suggest that the company still has numerous avenues to growth.

That said, there are other, even more promising stocks for investors seeking big returns, and we've asked three of our Motley Fool investors to identify a company that has what it takes to outperform Alibaba down the stretch. Read on to see why they picked Vertex Pharmaceuticals (VRTX -1.22%), Tencent Holdings (TCEHY 2.04%), and Baozun (BZUN 5.42%) as superior growth vehicles. 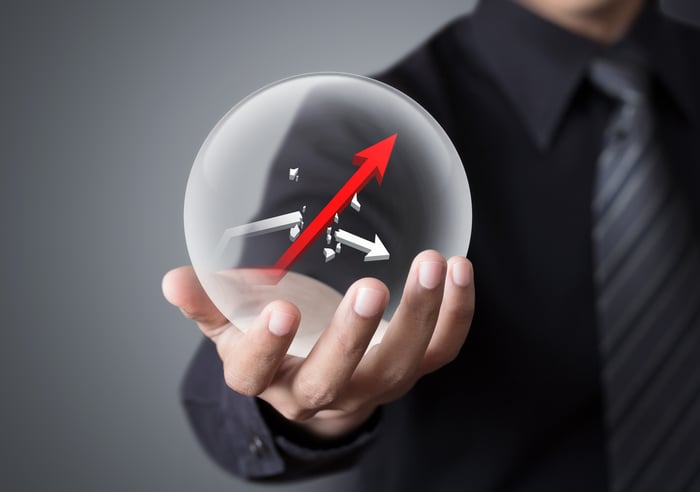 One of Alibaba's e-commerce partners

Keith Noonan (Baozun): Many of the same tailwinds poised to benefit Alibaba should also benefit Baozun -- an e-commerce company that specializes in providing online sales platforms for consumer brands including Nike, Microsoft, and Calvin Klein in the Chinese market.

Baozun is partnered with Tmall -- China's most popular online-retail platform and the core of Alibaba's business. Baozun-powered online stores are featured on Tmall, and Alibaba also owns a roughly 16% stake in its smaller e-commerce partner. However, Jack Ma's company isn't Baozun's only partner. With presence on JD.com's and Tencent Holdings' platforms as well, Baozun stores enjoy wide integration across the Chinese e-commerce space.

Valued at roughly $3 billion, Baozun is a small company compared to China's online retail titans, but it already has a broad imprint in the market and a promising opportunity to be a part of the growth that's happening there. Things have been looking pretty good on that front.

Sales were up 14.5% year over year in Baozun's March-ended quarter -- the company's lowest quarterly sales growth since 2014 but a laudable result when placed in context. Net income for the period climbed 41% as the company continued the early stages of a pivot away from storing and shipping orders and toward the more profitable service of providing online sales platforms and connecting brands with customers.

Promising early results for the transition and the potential to continue increasing its brand-partner count and customer sales base explain why the stock is up roughly 145% over the last year, and I think the long-term outlook holds even more promise. Alibaba still has plenty of opportunity for growth, but I wouldn't be at all surprised to see Baozun stock outperform it over the next decade.

Take advantage of this temporary monopoly

Vertex claims three approved drugs that treat cystic fibrosis (CF) by helping ensure that CFTR proteins are produced correctly instead of being misfolded. These drugs -- Kalydeco, Orkambi, and Symdeko -- are called CFTR modulators. How many other CFTR modulators are on the market right now? Zero.

But Vertex's currently approved drugs can only treat around 44,000 CF patients. There are an estimated 75,000 CF patients worldwide. That presents a significant opportunity for the company to grow. Vertex is developing several triple-drug combination therapies that should enable it to treat another 24,000 CF patients. The biotech is also researching use of gene editing to help the remaining CF patients.

Another biotech, Galapagos, is also developing triple-drug combos for CF. However, Vertex has a solid head start. And its first-mover advantage should be significant.

In addition to CF, Vertex is targeting several other indications, including rare genetic blood disorders beta-thalassemia and sickle cell disease. These programs are still several years away from potentially reaching the market. However, Vertex has several shots on goal and definitely has a proven track record of success with its clinical development efforts.

Alibaba is a great stock, but I have personally only bought one stock over the past couple of months -- Vertex. I think it will be a big winner over the long run.

Nicholas Rossolillo (Tencent Holdings): Video game and social media operator Tencent sits near the top of the list of China's largest public corporations. Its stock has also doubled in the last year and a half, putting it on par with Alibaba's returns. However, big gains could still be in store for this internet giant.

Investors got worried early in the year that profits would shrink as Tencent used cash flow from its global video game empire and leading Chinese social platforms QQ and WeChat to invest in newer business like online payment solutions and cloud computing services. During the first quarter of 2018, some of those worries were laid to rest. Revenue and operating profit rose 48% and 59%, respectively. As to the latter metric, the operating profit margin improved to 42% from 39% a year ago and at the end of 2017.

Even though Tencent is already a huge company -- currently carrying a market cap of $495 billion -- that shouldn't scare growth investors away. Tencent is only just beginning to monetize its social media business through advertising, with sales from that department growing 69% from the same period a year ago. Other segments like cloud and payments more than doubled in size and now make up nearly a quarter of all revenue. With that kind of momentum, Tencent's stock could be headed much higher.

5 Stocks to Buy in January

3 Stocks That Could Put Netflix's Returns to Shame

3 Stocks That Could Put Amazon's Future Returns to Shame