Please ensure Javascript is enabled for purposes of website accessibility
Log In Help Join The Motley Fool
Free Article Join Over 1 Million Premium Members And Get More In-Depth Stock Guidance and Research
By Todd Campbell, Daniel Miller, and Leo Sun – May 25, 2018 at 3:57PM

The potential for significant growth at these companies may be underappreciated by Wall Street analysts, and that could make them smart stocks to buy.

Great companies come in all shapes and sizes. That makes it tough for Wall Street to stay on top of every stock, especially when so many investors focus on short-term returns, rather than the long-term opportunity for a company. We asked some Motley Fool investors to scour their universe for names that they think are underappreciated by Wall Street, and they responded with DexCom Inc. (DXCM), HUYA Inc. (HUYA), and Control4 Corp. (CTRL). Are these stocks savvy buys for your portfolio? Read on to learn more about what makes them compelling investments.

A medtech stock for the long haul

Todd Campbell (DexCom): The number of Wall Street analysts with a "hold" rating on this diabetes medtech stock has increased from three to seven since February. And given analysts' reluctance toward "sell" ratings, that's a pretty pessimistic -- and I'd argue incorrect -- assessment of DexCom's opportunity.

Yes, DexCom's shares have rallied significantly since FDA approval of its latest continuous glucose monitor (CGM) for diabetes, but long-term investors might be better off focusing on the fact that the addressable market for CGMs is massive, and likely to get even bigger in the coming decade.

In the U.S. alone, over 30 million people are living with diabetes. And because 84 million Americans have prediabetes, or elevated blood sugar levels, the addressable patient population is expected to skyrocket to nearly 55 million by 2030.

Currently, most of the demand for CGMs is coming from type 1 diabetes patients, who are at the greatest risk of life-threatening complications. However, a much bigger opportunity for DexCom is emerging in type 2 patients, who represent about 95% of diabetics in the United States.

In Q1 2018, DexCom's sales grew 30% year over year to $184 million. And as the company's monitors gain more-widespread adoption by payers and patients in type 1 and type 2 diabetes, management expects its full-year sales to exceed $850 million, up from $719 million in 2017. There are about 40,000 new type 1 diagnoses and 1.5 million total diabetes patients diagnosed annually in the U.S. So there's a very long runway ahead of this company that can support its future sales growth and, eventually, profitability.

Overall, given an increasing diabetes market and the likelihood of DexCom delivering advances that give patients even greater control over their disease, I believe this is a great stock to add to growth portfolios.

A pure play on the esports market

Leo Sun (Huya): Chinese video streaming company YY (YY) recently spun off its game-streaming unit, Huya, in an IPO that raised $180 million. The stock then went on a roller-coaster ride, surging from $12 per share to almost $24, before sliding back to the high teens.

Very few Wall Street analysts have chimed in about Huya, but its growth is stunning. Its average monthly active users (MAUs) rose 30% annually to 83.4 million last year, as its mobile MAUs jumped 75% to 36.2 million. Huya's total number of paying users rose 63% annually to 2.9 million during the fourth quarter, as its monthly active broadcasters climbed 11% to 610,000.

China's esports market reached 229 million gamers last year, according to market research firm Frost & Sullivan, and that figure is expected to hit 537 million by 2022. If Huya stays at the top of this market, it could experience explosive growth over the next few years. But at $19, this stock trades at about 11 times sales -- which indicates a lot of growth is already baked in. 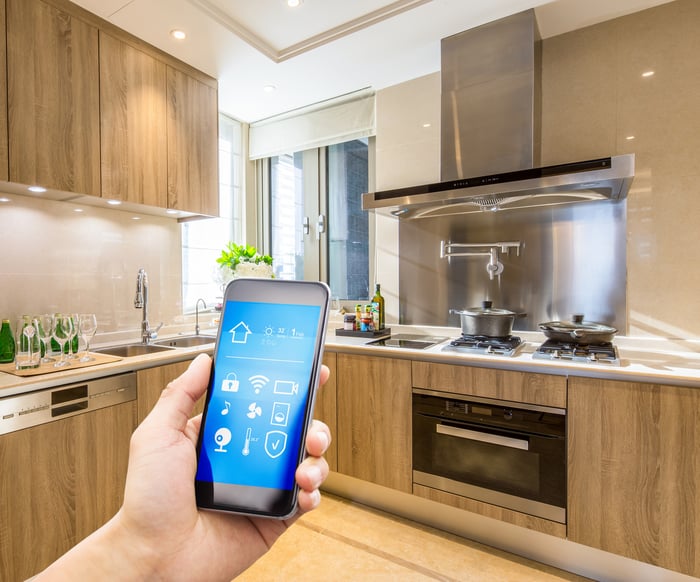 Daniel Miller (Control 4 Corp.): One stock flying under Wall Street's radar is Control 4. It takes time to get noticed by Wall Street, and with a market capitalization of only $630 million, it'll be a bit before Control 4 is a household name. And becoming a household name is precisely the company's business.

Control 4 provides a plethora of products and services for the high-end smart-home market. We're talking professionally installed systems that can cost upward of $50,000 all told. These solutions include anything and everything: smart lighting, audio, multiroom video, remote controls, doors, thermostats, as well as platform products to make everything work seamlessly. The company's future is intriguing for two reasons: its balance sheet and growth prospects.

Starting with its balance sheet, consider that Control 4 ended the second quarter with more than $76 million in cash and no debt. The pristine balance sheet is even more impressive considering its history of acquisitions. Among other smart-home suppliers, it acquired CardAccess in 2014, Leaf in 2015, Pakedge in 2016, and ihiji in 2018. It has successfully integrated these, and with no debt can pounce on any opportunity that appears to be a good fit and can drive its top line higher.

With a balance sheet that enables Control 4 to pounce on more acquisitions, juicy international growth prospects, and a stock that jumped 192% in 2017, it won't be long before Wall Street's radar detects this smart-home company.