Please ensure Javascript is enabled for purposes of website accessibility
Log In Help Join The Motley Fool
Free Article Join Over 1 Million Premium Members And Get More In-Depth Stock Guidance and Research
By George Budwell – May 25, 2018 at 6:17AM

Management's bold moves have been steadily stemming concerns about the company's future.

Geron Corporation (GERN -6.50%), a clinical-stage cancer company, has grabbed the attention of growth investors due to its enormous upside potential. The short version of the story is that Geron is awaiting a critical continuation decision by partner Johnson & Johnson (JNJ 0.33%) in regards to their blood cancer collaboration for the telomerase inhibitor imetelstat.

If J&J opts in, Geron will be in line for a milestone payment ranging from $65 million to $135 million, depending on whether the company decides to exercise its co-development and promotion rights going forward. On the other hand, the drug's rights would return in full to Geron if J&J walks away. 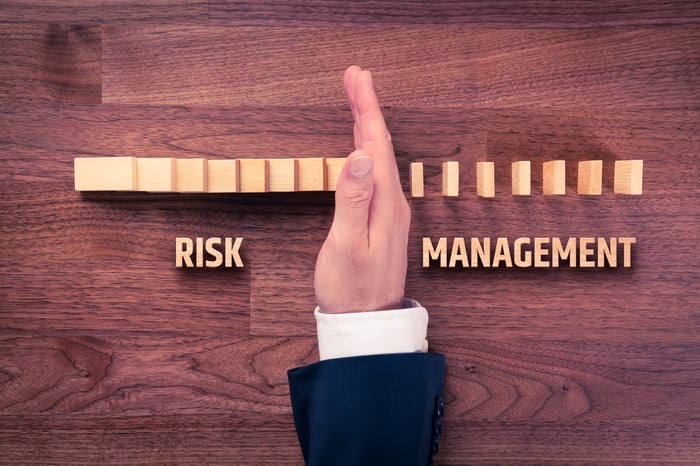 As it's extremely tempting to only focus on the upside potential of speculative biotech stocks, I think investors would be wise to do the opposite and seriously weigh Geron's downside risk ahead of this binary event. So, with that goal in mind, let's take a deeper look to see where Geron may be headed in a worst-case scenario.

Where is rock bottom?

Short-sellers have argued elsewhere that Geron's valuation would dip to around its last stated cash position (about $150 million per the company's last update). If true, its shares would be in for a catastrophic nosedive in excess of 80% from current levels. That said, Geron did just issue a new $250 million shelf offering that could dramatically impact its cash position by the time J&J makes its decision, although it's totally unclear at this point how the biotech plans to roll out this massive offering.

Regardless, I think this doomsday scenario is only likely in the event that imetelstat also bombs both of its ongoing trials. As a reminder, imetelstat is presently being investigated as a treatment for transfusion-dependent patients with lower risk myelodysplastic syndromes (MDS) who are refractory or resistant to treatment with an erythropoiesis stimulating agent (ESA), as well as intermediate-2 or high-risk myelofibrosis (MF) patients who are refractory to or have relapsed after treatment with a JAK inhibitor.

Fortunately, the drug appears to be exceeding expectations in its MDS trial, and it's also showing signs of improving overall survival in advanced MF as well. That being said, Geron would probably only be able to take on one of imetelstat's indications in a go-it-alone strategy, and the company has already earmarked MDS as that indication.

Where does that leave Geron in the event J&J walks? The good news is that Geron would likely sport a late-stage asset potentially capable of generating several hundred million in peak sales for its first indication. That should raise Geron's stand alone valuation by at least $150 million to $250 million, depending on how confident the market is in the company's ability to advance imetelstat's clinical program.

Unfortunately, that would still translate into a decline of somewhere between 52% to 64% (assuming the company doesn't crush current shareholders by rolling out the entirety of the new shelf offering right out of the gate). The silver lining, though, is that Geron's floor has seemingly increased, thanks to management's prudent decision to raise capital and to outline a clear path forward for shareholders in case J&J returns imetelstat's rights.

Investors shouldn't fear a J&J exit in the least, and Geron's CEO John Scarlett said as much during the company's annual meeting. Why? The reason is quite simple.

Blood cancer drugs -- even minor ones -- are worth their weight in gold. Want proof? Celgene (CELG) cut a deal with Impact Biomedicines earlier this year worth up to $7 billion for the myelofibrosis drug candidate fedratinib, even though the drug has a rather rocky clinical history.

And Celgene is by far not the only one paying ridiculous premiums for blood cancer drugs. Jazz Pharmaceuticals doled out $1.5 billion for the acute myeloid leukemia medicine Vyxeos when it was still in clinical trials; AbbVie spent a jaw-dropping $21 billion for a portion of the commercial rights to Imbruvica; Takeda thought Ariad Pharmaceuticals was worth $5.2 billion for two cancer drugs with an unclear commercial outlook; and the list goes on.

The point is that if J&J leaves, there will almost certainly be another suitor waiting in the wings. Late-stage blood cancer drugs don't just fall out of the sky after all.

That's why I wouldn't hesitate to aggressively buy Geron's stock if it does plummet in the wake of a negative continuation decision by its current partner. Truth be told, however, I'm cautiously optimistic that J&J isn't going anywhere.