Please ensure Javascript is enabled for purposes of website accessibility
Log In Help Join The Motley Fool
Free Article Join Over 1 Million Premium Members And Get More In-Depth Stock Guidance and Research
By Chris Neiger - May 26, 2018 at 7:22AM

3M, Apple, and American Tower all have a lot to offer your retirement portfolio.

Many retirees are very dependent on their Social Security benefits, but with the average monthly benefit being only $1,404 this year, it's clear that most retirees will have many more sources of income if they want to live comfortably.

That's why it's important to think about adding some dividend stocks to your retirement portfolio so that you can not only receive some additional income but also build wealth at the same time. To help you get started, let's take a look at why three very different companies -- 3M (MMM -0.03%), Apple (AAPL -1.19%), American Tower (AMT 1.41%) -- could be great long-term investments for your retirement. 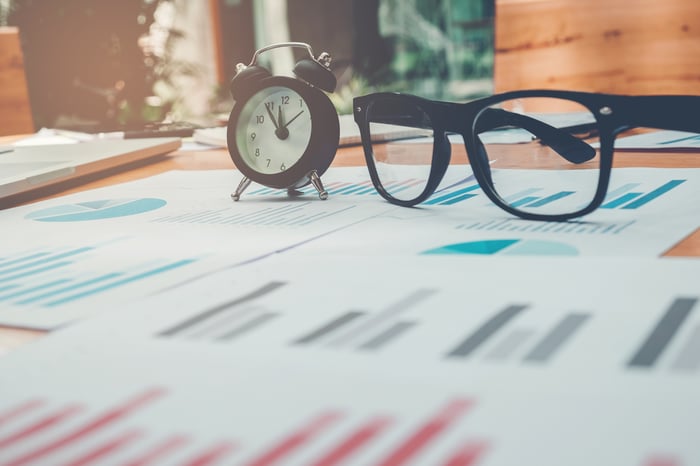 A dividend stock for the ages

Retirees looking for a steady dividend play to add to their portfolio would be wise to give 3M a hard look. The company has been paying a dividend for more than a century and has raised it for a staggering 59 consecutive years. You can certainly earn higher yields with other stocks -- 3M's current forward yield is 2.65% -- but you'll be hard-pressed to find a company with the same long-term thinking that 3M offers.

3M consistently invests about 6% of its sales into its research and development division, which allows the company to bring new products to market continually. The company sells about 60,000 products right now, which include industrial adhesives, Scotch tape, Post-it Notes, and even display films for tech devices.

In the most recent quarter, 3M's revenue was up 7.7% from the year-ago quarter to $8.3 billion, and adjusted net income popped 15.7% to $2.50 per share. The company's shares took a bit of a hit, though, as management scaled back its earnings guidance for the full year.

But investors shouldn't worry. Minor adjustments to the company's 2018 earnings don't spell doom for the company's long-term outlook. 3M is continually investing in new products that should pay off years down the road, and a bumpy quarter won't change that.

The recent drop in 3M's share price might best be viewed as a buying opportunity for dividend investors who understand that Wall Street's fickleness is best left unfollowed.

There was a time when Apple would have seemed like an odd stock for retirees, but ever since the company initiated its dividend in 2012, investors have started to look to this tech giant -- with its cash hoard of about $267 billion -- as a potential income investment opportunity.

Apple pays a modest 1.4% yield, but it has consistently raised its dividend each year since the payout began. Add to that the fact that Apple's management authorized a new $100 billion share repurchase program in the latest quarter -- and raised its dividend by 16% -- and you can start to see the value that this tech play is offering income investors.

Apple is, of course, dependent on sales of its iPhone, which accounted for 62% of the company's top line in the second quarter. Bears will point to a stagnant smartphone market as a reason to avoid Apple, but they're missing the company's growing opportunities from its services sales -- which include Apple Music, Apple Pay, and the App Store.

Services revenue was up 31% year over year in the second quarter and accounted for 15% of Apple's total sales, up from 13% in the year-ago quarter. Investors should also take note of Apple's sales growth of 16% in the most recent quarter and its diluted earning per share growth of 30%. In addition to the company's impressive sales growth, increasing services revenue, and its growing dividend, Apple's shares are trading at just 14 times the company's earnings. All of the above mean Apple is not only well-positioned for the future, but its shares are in the bargain bin right now.

American Tower has quite a lot to offer retirees. First, the company pays a forward yield of 2.19%, which is on par with the average dividend yields from stocks in the S&P 500, and it has consistently raised its dividend for six consecutive years.

There are other stocks with higher yields and longer dividend histories, to be sure, but investors should know that American Tower is structured as a real-estate investment trust (REIT), which means most of the company's net income is paid out as dividends.

If American Tower's yield and REIT structure isn't tempting enough, consider that AMT is also on the cusp of benefiting from the next generation of wireless communication, called 5G. American Tower owns 160,000 cell tower sites throughout the world, and telecom companies across the globe are already conducting tests of 5G.

When 5G becomes the new standard for wireless communication, it'll mean that carriers will need to upgrade their networks to handle increased traffic, and that means American Tower should be able to earn more in revenue from renting out additional tower space to carriers.

Even if the 5G trend takes longer to pan out than expected, American Tower's business is still in fine shape. The majority of the company's tower sites are located outside of the U.S., and many countries are still utilizing 3G and 4G for most of their communications. All of this means that as data demands expand across the globe -- and global carriers upgrade their services -- American Tower is poised to benefit for years to come.

Remember this for your retirement

Even if you don't believe 3M, Apple, or American Tower are the right stocks for you, make sure that as you look for income opportunities, you're looking at great companies that have the financial stability to continue paying their dividends for years to come. And if you're still trying to figure out the best strategy for your retirement, consider checking out these articles to help you decide when you should retire, when to take Social Security, how to handle estate planning, and much more.