Twenty years ago, consumer-facing companies had one major goal: build a brand worthy of legendary loyalty. That's what made Coca-Cola one of Warren Buffett's favorite -- and most profitable -- investments: People were willing to pay a little more for a Coke than the alternatives. That brand power not only helped the company charge incrementally more every year, but it also made it very popular in emerging markets.

But that was then, and this is now. With brand-loyal baby boomers heading into retirement -- a stage in life where they'll spend much less on such goods -- and millennials growing up and expanding their buying power, consumer packaged goods (CPG) companies are in for a world of hurt. Millennials, ranging in age from early 20s to late 30s, are expected to outnumber baby boomers by next year and some estimate they already have more buying power than any other age group. 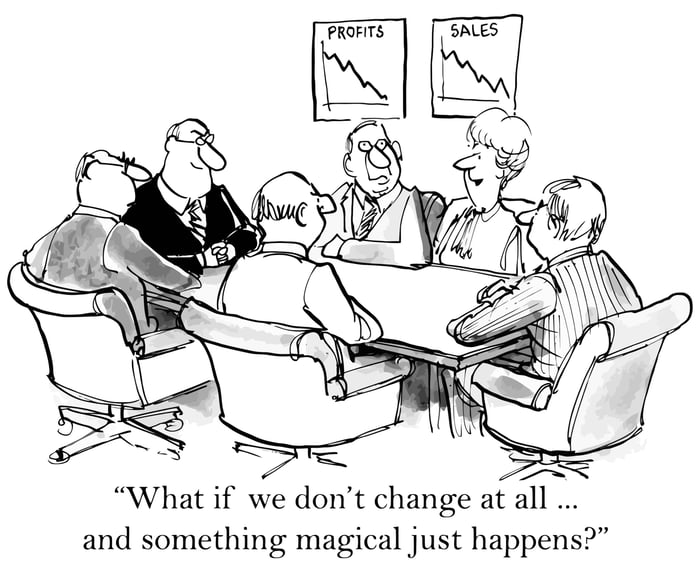 Former hedge fund manager Mike Alkin highlighted what's on the horizon in a January 2018 conference. He said millennials simply don't care about brand strength when it comes to CPGs. Essentially, they want three things when they're shopping:

By definition, CPGs that are publicly traded aren't going to fit into this paradigm. And even when larger conglomerates acquire smaller brands with loyal millennial followings, the tactic doesn't work: These consumers learn about changes in ownership and simply rotate to other brands.

Overall, this is a great trend for building up the resiliency of local economies, but terrible if you're putting your nest egg behind traditionally rock-solid companies with big brands.

The 10 CPG stocks I'm avoiding at all costs

Of course, not all companies will suffer, and there will be varying degrees of suffering among those that do. The Vanguard Consumer Staples ETF has been lagging the S&P 500 significantly since the market took a brief breather in February 2016. 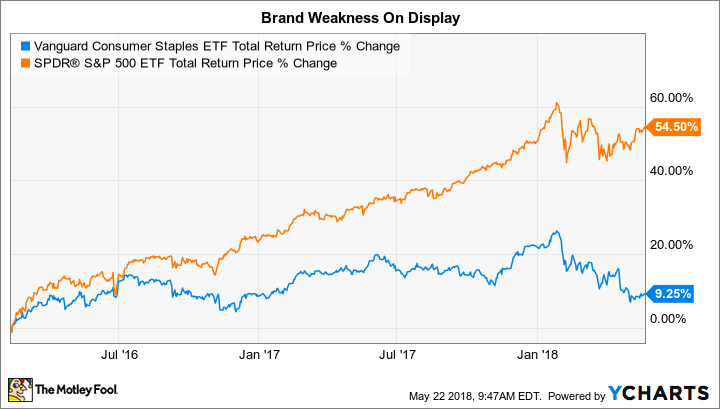 When it comes to picking out the stocks that I think are in the most trouble, they all share a few very important traits:

Here are the 10 stocks that I think are in the most trouble. Below, I'll get into how each of them stacks up against these three metrics.

Each of these companies has spent decades -- or even a century -- spending money on building out extensive distribution networks, enhancing their brands, and acquiring promising start-ups. As I said, investments in the latter two areas are largely wasted when it comes to courting the younger generations. The distribution capabilities do, however, offer some cost savings for consumers. With more and more CPG companies turning to Amazon to fulfill their distribution needs, though, even that advantage is being minimized.

Here's what those dynamics have done to these 10 companies (keeping in mind that inflation between March 2016 and March 2018 clocked in at 5%, meaning that 5% sales growth would simply signify keeping pace with inflation): They all have negative net cash positions. I went back five years to when these players went on their ill-advised acquisition hunts to show how the situation has largely gotten worse for many of them.

These 10 stocks warrant varying degrees of alarm. Each company has its own special circumstances explaining its decline. Coke, for example, has refranchised its bottling operations, and that has dragged on sales considerably. But the same general principle operates across the board: Their products are nowhere near as popular as they once may have been.

The cost-cutting measures that help eke out cash flow when revenue is falling can only go so far. At some point, there's only so much fat that can be cut. Unless millennial tastes change quickly, when that time comes, leverage (all but Coke have more debt than cash and investments on hand) will become an enormous drag, necessitating secondary offerings, additional financing, or even dividend cuts. The writing is on the wall.

Given this, one might think that all of these stocks would trade at significant discounts, but that's not the case with all of them. And the ones that do trade at such discounts are either the most highly leveraged ones, or the ones seeing the largest sales drops.

Here they are, listed from most- to least-expensive by price-to-earnings ratios.

As you can see, investors have already priced low expectations into stocks like General Mills and Kellogg. And they're well aware of the precarious debt situation Tyson Foods is in. But they seem to be confident -- falsely so, in my opinion -- in the prospects of Coke and Pepsi.

While international growth could provide some respite for the larger players, I still believe that the long-term trends are decidedly against the industry. E-commerce is steadily gobbling up market share across the world, and as it does brands matter less and less.

That's why I caution you against investing in these 10 companies, which have shown terrible growth rates, have high levels of debt (no matter their interest rates), and -- in some cases -- are richly valued.