Even in the midst of a market that many view as overpriced, inexpensive stocks can be found. One valuation metric that I like to use to find these potential bargains is the enterprise value-to-EBITDA ratio.

The first component of this metric -- enterprise value (EV) -- is calculated by adding market cap plus debt, minority interest, and preferred shares, then subtracting total cash and cash equivalents. EV represents what it would actually cost to buy a company outright, which makes it more useful than just market cap or stock price.

The second component of the metric is EBITDA -- earnings before interest, taxes, depreciation, and amortization. One advantage to using EBITDA instead of net income is that it isn't affected by how a company finances its balance sheet (for example, through debt, issuing equity, or both).

A low EV-to-EBITDA measurement is a pretty good indicator that a stock is relatively cheap. And there are three healthcare stocks that are undeniably dirt cheap right now based on the metric: United Therapeutics (NASDAQ:UTHR), Gilead Sciences (NASDAQ:GILD), and Humana (NYSE:HUM). But are these cheap stocks smart picks to buy? 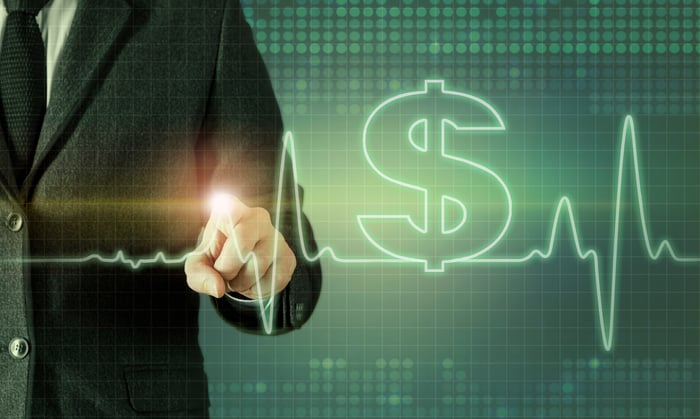 United Therapeutics claims a super-low EV-to-EBITDA ratio of 3.98. You won't find many stocks that are less expensive using the metric. But why is the biotech so cheaply priced?

A lot of United Therapeutics' low valuation stems from the threats the company faces from generic competition. Pulmonary arterial hypertension (PAH) drugs Remodulin and Adcirca generated $671 million and $420 million in sales, respectively, in 2017. Revenue from these drugs will probably fall with generic versions likely to reach the market this summer.

The biotech does have three other approved drugs -- Tyvaso, Orenitram, and Unituxin. However, these drugs combined contributed less than 37% of United Therapeutics' total revenue last year. Also, the patents for Tyvaso are being challenged by a leading generic-drug maker.

United Therapeutics' pipeline includes seven candidates that could win approval over the next three years. Five of these candidates are new formulations or combinations of the company's existing drugs. It remains to be seen if these drugs can turn things around for United Therapeutics.

Gilead Sciences' EV-to-EBITDA ratio currently stands at 6.39. This value is well below that of other big biotechs in Gilead's peer group. As is the case with United Therapeutics, though, there's an easily identifiable reason behind Gilead's low valuation.

For Gilead, that reason is sinking hepatitis C virus (HCV) product sales. The biotech once enjoyed staggering growth, thanks to its HCV franchise. Gilead is largely a victim of its own success, though. So many patients were cured that there are fewer patients remaining who need treatment. In addition, Gilead now has a formidable rival in the HCV market with AbbVie.

Despite these HCV woes, however, there are several reasons to think that the future could be brighter for Gilead. The biotech's management team thinks that HCV sales will stabilize. Gilead recently launched new HIV drug Biktarvy, which is practically a sure bet for becoming a megablockbuster success.

The company's pipeline could also help Gilead's fortunes improve in the not-too-distant future. Two candidates that especially stand out are selonsertib, which targets treatment of non-alcoholic steatohepatitis (NASH), and autoimmune disease drug filgotinib.

Humana claims an EV-to-EBITDA ratio of 6.97. The big health insurer's main rivals are much more expensive. The primary reason behind Humana's relatively low valuation can be found on its balance sheet.

While Humana's market cap is around $40 billion, the company's enterprise value is less than $26 billion. Why this big gap? Humana's cash stockpile, including cash, cash equivalents, and marketable securities, totaled $18.6 billion at the end of the first quarter. The company's total debt was only $5.3 billion.

At least one deep-pocketed investor seems to find Humana's valuation attractive. The Wall Street Journal reported last month that Walmart was in early talks about acquiring Humana. There are several reasons the huge retail company could be interested in moving into health insurance. So far, though, no final deal has been announced.

Even if Walmart doesn't buy Humana, the health insurer appears to be in solid shape. Humana's Medicare Advantage business is booming. After posting great Q1 results earlier this month, the company upped its full-year 2018 earnings guidance.

But are they buys?

Just because something is cheap doesn't mean you should buy it. Sometimes, the low valuation should instead be a warning sign to stay away.

I think that's the case with one of these stocks. United Therapeutics faces huge challenges that I suspect will cause its stock to drop even more. However, my view is that it's a different story for Gilead Sciences and Humana.

The ingredients are there for Gilead to make a comeback. I think that stabilization in the company's HCV sales is a matter of when -- rather than if. I like the prospects for Biktarvy and for Gilead's pipeline. I also like Humana's position in the marketplace. An acquisition by Walmart seems like a smart move in my opinion.

All three of these healthcare stocks are cheap for a reason. But I predict that Gilead and Humana will only be cheap for a season.