Please ensure Javascript is enabled for purposes of website accessibility
Log In Help Join The Motley Fool
Free Article Join Over 1 Million Premium Members And Get More In-Depth Stock Guidance and Research
By Brian Withers – May 28, 2018 at 8:11AM

Device sales have slumped lately, but Fitbit's co-founders have their sights set on digital health. And they have the power to make it happen.

Fitbit (FIT) has had a tough go of it lately. The fitness tracker wearables manufacturer posted negative revenue growth in Q1-2018 of 17%, widening losses, and declared its transition year has been extended into a multi-year transformational effort. It would not be a surprise if even die-hard investors were getting impatient with the stock down over 80% since its IPO in June 2015. 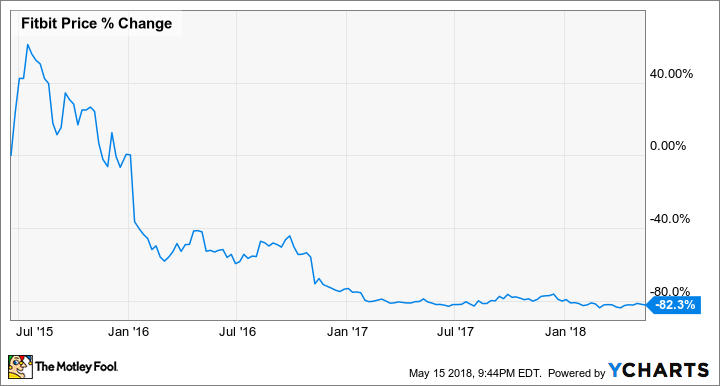 With all the challenges Fitbit faces, investors need to understand that a majority of the company's voting shares are concentrated with the two co-founders: James Park, CEO, and Eric Friedman, Chief Technology Officer. These two combine to control over 70% of the voting power, with no other person or organization having more than 5%.

Before there was Fitbit

Friedman first met Park at his start-up called Epesi Technologies. Park had dropped out of Harvard in 1998 to start up a business-to-business infrastructure software company and hired Friedman, who had just graduated with his Masters degree in computer science, a year later as a software engineer. Even though Epesi didn't survive, Park and Friedman's relationship did.

After Park's first start-up failed, the two teamed up to co-found a peer-to-peer photo-editing and sharing platform called WindUp Labs. The company did well enough to be bought by CNET in 2005. Park stayed on as Director of Product Development and Friedman as an Engineering Manager. But their time at CNET didn't last long, as Park soon had another start-up idea.

In 2006, Park bought a Nintendo Wii on the first day it was available and was immediately taken with its motion sensors and simple interface. He was impressed that the combination of hardware and software was so well designed that it created an engaging experience even for novice technology users. Park thought that this same approach could be used to design a fitness tracker that would be as "sophisticated and accessible as the Wii." Park called Friedman with his idea, and Fitbit was born.

Fitbit has sold 76 million fitness trackers since it was started shipping trackers in 2009. Source: Fitbit

Aligned with a passion

Park's passion for Fitbit's mission "to empower and inspire you to live a healthier, more active life" has been a driving force of the company from the beginning. When Park talked to potential customers in 2008 about the company's first fitness tracker, he explained that Fitbit is a device and a website that motivates people "to live a healthier life." Park is still charged up about this mission today. In an interview from last year, he explained his motivation for his job as CEO. "It's the longest job I've ever had... And it's definitely made my hair more grey. Most importantly, it's given me the opportunity to dramatically change lives for the better."

James Park, Fitbit's CEO, explaining the first Fitbit product in 2008 before it was manufactured.

Friedman shares Park's passion. His LinkedIn page he says he's "helping to make the world a healthier place, ideally leaving it a better place when I leave it than it was when I entered it." When Friedman was interviewed in early 2017, he shared his insights about the widespread impact Fitbit could have.

We're in the midst of a world full of chronic disease where I think we can help reduce the incidence of chronic disease and help people manage those diseases. Good health leads to better, happier lives, and the very fact that we're doing this at scale and have touched so many people around the world is phenomenally rewarding.

For these co-founders, this mission and the company's vision "to make everyone in the world healthier" are not just words on the company's website, but is defining the future of Fitbit.

Park has set his sights beyond selling fitness trackers and wants the company to become a "true digital health platform," which could put Fitbit in a position be a regular part of how we think about our health in the future. The company has recently begun to focus on improving outcomes for chronic conditions such as diabetes, heart health, sleep, and mental health. Park explained that the company is well positioned to make a difference for patients who have these conditions.

...according to the CDC, [these conditions] can be positively impacted by increasing physical activity, reducing stress, improving sleep quality and managing weight and nutrition, all of which play to the strength of our device and software offerings.

A great example of this is the company's acquisition of Twine Health, which with combines a digital and human coaching to help people manage chronic conditions such as diabetes or hypertension.

Another recent move is focused on making a difference on the rate childhood obesity, which Park explained has "more than tripled since the 1970s." The company announced a wearable tracker designed specifically for kids, called Fitbit Ace, which uses software to engage the whole family to help kids build healthy habits.

Fitbit is making progress to be known as more than a device company, and has a significant opportunity to do so with hundreds of billions spent each year on chronic diseases such as diabetes and heart disease.

These initiatives would help the company march further towards its founders' goals, and they could help turn around Fitbit's fallen stock. Expanded uses could revive device sales, and more advanced health monitoring and coaching services could open up the company to high-margin platform revenue.

For investors that are bought in to Park and Friedman's vision, there's a lot to like about Fitbit.