Just when investors thought its transition year was complete, Fitbit prepares to tackle a new set of challenges.

Just when Fitbit (FIT) investors were hoping for a glimmer of good news in the company's fourth quarter earnings report, it seems this wearable device maker's turnaround has stalled.

Revenue didn't grow, the company's new smartwatch sales were disappointing, and it posted a bottom line loss. With revenue from device sales projected to decline in 2018, the company must now move toward a non-device based recurring revenue model -- and that's going to take longer than a single "transitional year." 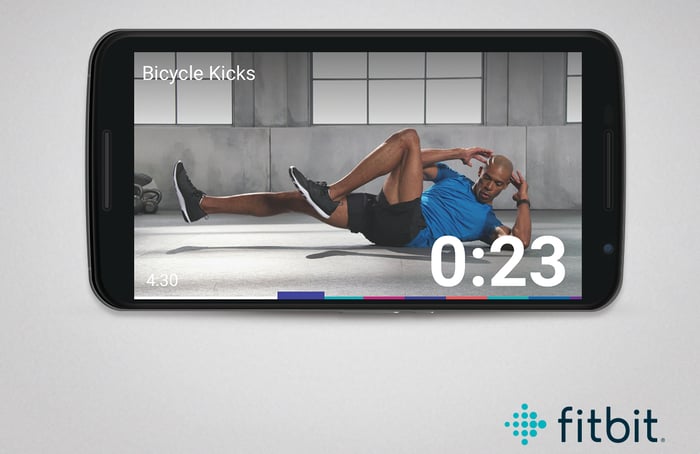 As we entered 2017, we embarked in a transitional year with a plan to return the business back to growth and profitability while delivering on our financial and product commitments.-James Park, CEO

Unfortunately, Fitbit wound up short of Park's goal of returning "back to growth and profitability." Revenue declined for the fifth consecutive quarter with the fourth quarter of 2017 showing a 0.5% decrease from the previous year. Profits were nowhere to be found with the company registering a GAAP bottom line loss of $45.5 million for 2017's final quarter.

Despite these misses, the company does have an improved financial position from a year ago.  Revenue has diversified with a 7% increase in international revenue year-over-year. Improved product quality has driven gross margins up to 42.8% from 39% the previous year, and the company reduced its operating expenses year-over-year by 7%, beating its non-GAAP operating expense target by $53 million.

The challenge for the coming year is for Fitbit to become even leaner and less dependent on the sale of devices.

Investors hoping that Fitbit's 2017 "transitional year" would get the company back on the right track have been disappointed. With Park's recent declaration of the prolonged transformation, he made it clear that Fitbit's business model needs significant work to achieve a turnaround. The CEO laid out a plan with four key areas of focus, with the first two focused on strengthening the current device business, and the last two on building new recurring revenue streams.

Improving Fitbit's bread–and-butter device business with require the company to improve the quality of its device revenue streams and slimming its cost structure even further. With consumer preference moving away from basic fitness trackers to full featured smartwatches, the company needs to transition its product line to match customer demand.

After initially being slow to jump on the smartwatch bandwagon, Fitbit started moving in that direction last year. This year it is eliminating one of its low end trackers and has added to the company's smartwatch lineup with the new $200 Versa. On the cost side, the company is driving an additional 7% operational expense reduction and working to better leverage partners, such as its investment in the tech start-up, Sano. While shoring up its current business won't be easy, Fitbit has tremendous experience with devices and the operational leadership to execute.

The second part of Fitbit's plan will be more challenging, but more important for its longterm survival. Many Fitbit bears compare the company to Garmin with its GPS devices whose main business ended up being a much smaller niche market as it was disrupted by better technology. Fitbit needs to move beyond its devices to avoid this fate.

The company's answer is looking to deepen its reach into the huge healthcare market and building non-device recurring revenue streams. The two efforts are highly dependent upon each other. Many of Fitbit's healthcare initiatives are more geared to a monthly subscription model, including its personal training program, Fitbit Coach, or its acquisition of Twine, which combines software and human coaching for chronic conditions such as diabetes.

Fitbit has all of the building blocks it needs to succeed in healthcare: a family of smartwatches that can track wellness metrics and the enormous amounts of health-related data that stems from them, in-house software developers and a developer community to create health related apps, and backing of the FDA to be able to create software that's considered to be a medical device. But pivoting the company won't be an easy task.

Currently, Fitbit's non-device revenue streams are small. Fitbit Health Solutions was less than 10% of revenue in 2017, and its corporate wellness programs and premium subscriptions, each represented less than 1%. Even with healthy growth projected in the coming year, Bill Zarella, the company's chief financial officer, called these the impact of these segments to 2018 results "relatively immaterial."

That means Fitbit will need to rely on additional cost reductions from its device revenue stream to fund this transition. The fact that revenues are projected to decline 7% in 2018 make the adjustment even tougher. In a worst-case scenario, the company can dip into its healthy cash position of $679 million including cash equivalents for the right strategic opportunity.

The difficulty of this transition should not be underestimated, nor should we forget about Fitbit's cash-rich competitor, Apple, which is already eyeing the healthcare market. I'm a Fitbit customer and shareholder and am confident that the company can make inroads in the healthcare space, but given the uncertain road ahead, my position in Fitbit is less than 1% of my total portfolio. Even though the stock seems like a bargain valued at less than two times the company's cash, investors should be cautious and take management at its word--this transition will take several years.