Tesla, Inc. (NASDAQ:TSLA) and BMW (OTC:BAMXF) aren't terribly different as automakers when you think about it. They both serve the luxury market, demand high performance from their vehicles, and command a premium price for their products.

What separates the two companies is where they are in their life cycle. BMW is a mature company and we know it can make cars and SUVs profitably. Tesla has ambitions to be a major automaker and is already the dominant electric vehicle (EV) manufacturer. But it hasn't yet proven the ability to profitably manufacture vehicles at a mass scale. It's that backdrop that frames how we should look at these stocks.

BMW is what Tesla wants to be

The first thing to look at between these two companies is the difference in the scale of their businesses. Tesla has generated $12.5 billion in revenue over the past year and BMW has generated $111.5 billion. 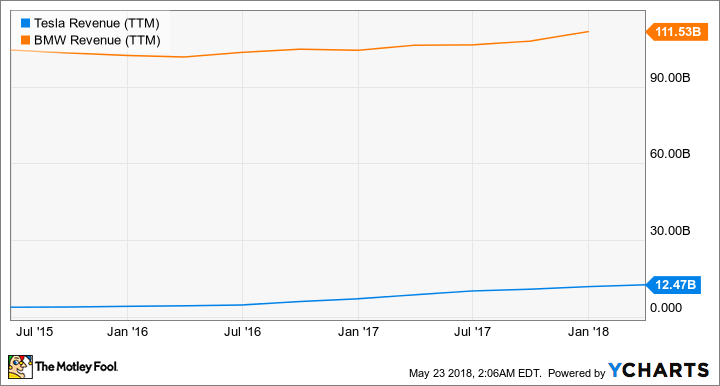 On a unit level, BMW sold 2.1 million vehicles in 2017 and Tesla passed 100,000 vehicles sold for the first time. Tesla hopes to someday get its Gigafactory and Freemont factory running at a 500,000-vehicle-per-year pace, but realistically 2 million vehicles in sales per year is probably a decade or more away.

BMW has also proven that it can generate among the best margins in the auto industry, consistently posting gross margin of around 20% and an operating margin of around 10%. Tesla hopes to generate gross margin of up to 25%, and at times, it's done just that. But we don't know what margins will look like when Tesla reaches a production scale of 500,000 units per year (or more). 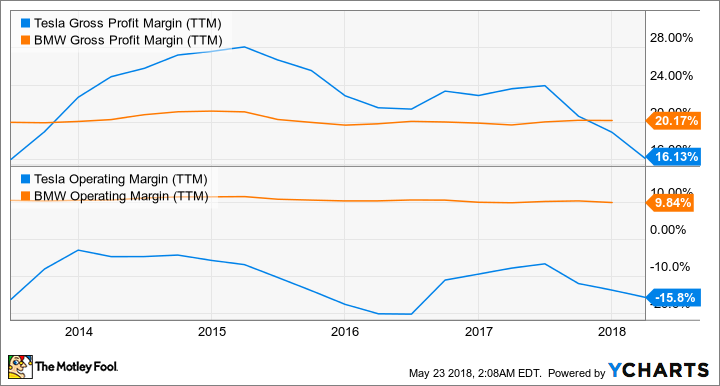 Until Tesla proves its ability to generate a 20%-plus gross margin with a mass production vehicle, I consider BMW's margins best in class and a goal Tesla someday may reach.

While Tesla would love to someday have the scale and operational efficiency of BMW, it's BMW that's behind the curve compared to Tesla's position in the EV market. Thus far, BMW has dipped its toes into the EV market with the i3, i8, and some plug-in hybrids, but it will be a few years before EVs make up a meaningful percentage of sales.

Being a step behind the competition isn't something BMW is used to, and management knows it needs to invest heavily to match, or beat, companies like Tesla in the EV market. To catch up, BMW is increasing research and development spending by $1 billion this year to $8.6 billion, partly to develop an all-electric X3 SUV and an i4 sedan. But they won't reach production until 2020, by which time Tesla's Model S, X, and 3 should be coming off the production line at a pace of at least 500,000 per year.

BMW is trying to catch up to Tesla in EVs, but it's hard to change the strategy of an established company quickly. Tesla's disruption of the status quo is undeniable, and BMW will have to work hard to establish its own EVs in the market. But there's one thing that makes me think BMW is still the better stock today.

What Tesla hasn't proven is the ability to sell mass-market cars at scale and make money at the same time, and that's what scares me most about the stock. Tesla's Model S and Model 3 have both gotten "not recommended" ratings from Consumer Reports because of reliability and safety concerns, respectively. There are reports of workers making some auto and battery parts by hand. Workers are concerned with safety at the Freemont plant, and then there are safety concerns about Tesla's autopilot system, which has been involved in multiple accidents now.

Making cars is hard, and Tesla hasn't proven the ability to produce large numbers of cars that meet industry standards yet. It's one thing to make the Model X or S and sell them for $75,000 or more to loyal customers. It's something entirely different to sell hundreds of thousands of affordable EVs (Model 3) to mass-market consumers, who have higher reliability standards than luxury buyers who are already committed to the Tesla brand.

Until Tesla can prove that it can make hundreds of thousands of vehicles per year at the levels of quality that the industry demands and at a high margin, my money will be on BMW. We know BMW has the ability to move aggressively into the EV market, but we don't know if Tesla has the chops to reach BMW's scale in manufacturing, and that's the biggest difference between these two stocks.