If you laid a timeline of human existence across a 100-yard football field, the idea of "retirement" -- where people permanently stopped working and relied on financial support -- would show up after having covered 99.9 yards! The earliest evidence of homo sapiens dates back 300,000 years, after all, but German Chancellor Otto von Bismark's decision to introduce the first version of "retirement" just surfaced 129 years ago.

The point being: retirement is a very new and historically unusual idea. 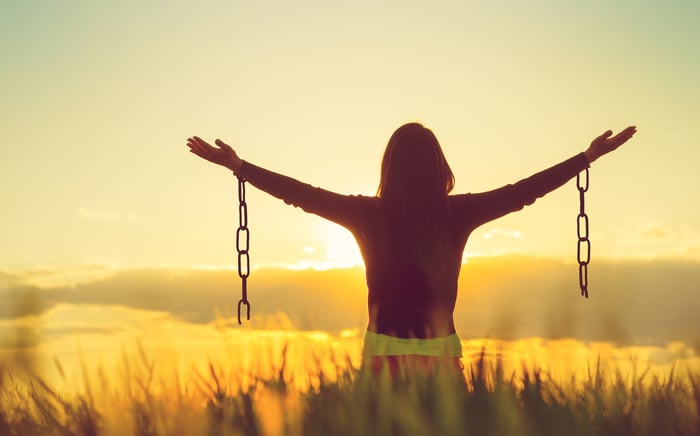 Even then, our definition of "retirement" has changed over time. As a 1998 paper by the National Bureau of Economic Research reports: "In the past, men may have been more likely to phase work out of their lives slowly... The continued importance of farming and of artisanal enterprises to the American economy may have allowed owners to reduce hours of work and continue to operate their enterprises with the help of family members and hired labor."

Today, however, we have a much more strict definition of retirement, according to the same report: "a complete and permanent withdrawal from paid labor."

But I don't like that definition -- at all. It assumes that humans inherently don't want to work as they get older, and that doing so holds few benefits. But work is about much more than just earning a paycheck; what we choose to focus on during life not only gives us purpose and meaning, but it also gets us out in the world and interacting with our neighbors.

"Financial independence" doesn't have the same type of rigidity. Instead, it focuses on getting to the financial point in your life where you quit mandatory paid work, and choose instead to work whenever -- and on whatever -- you please.

I have been researching -- and experimenting with -- this topic for almost a decade now, so I have lots of ideas about why you should aim to "retire early." But I'm not yet at the point where that's financially feasible. Instead of guessing about the rewards of early retirement, I decided to reach out -- via Twitter -- to some popular bloggers that have already reached this stage and ask them: What's the greatest benefit to retiring early and/or achieving financial independence?

Here are their top three answers, in reverse order of how popular they were.

It's no secret that Americans spend more -- and get less, in terms of years added to our lives -- on healthcare than anyone else. There are lots of culprits, but bad diet and poor exercise habits are at the top of every list.

Our work lives don't often help remedy the situation. Feeling rushed in the morning, we don't eat breakfast or pack ourselves a lunch, instead opting for processed foods bought during our break. And sitting in a cubicle all day can be awful for your health. A 2013 study, for instance, found that:

That's why Mr. 1500 -- a Colorado native who runs the blog 1500 Days to Freedom -- cited improved health as his greatest benefit.

I'm in the best health of my life because I now have time to exercise. FI will allow me to live longer and with higher quality of life. Nothing is more important than health.

Who doesn't worry about money from time to time? Sometimes, the anxiety surrounding the potential lack of money can be debilitating. A 2017 Northwestern Mutual study found that:

That's why the peace of mind that comes from knowing your nest egg can provide for you was cited by two others.

The Root of Good blog is run by a man who retired in 2013 at the age of 33. The biggest benefit he realized?

Another Twitter user, David Harvey, chimed in, saying: "it's going to be hands down peace of mind."

But by far the most often cited benefit of financial independence is the freedom of time. Perhaps this shouldn't be too surprising. In 2014, award-winning former Motley Fool columnist Morgan Housel wrote that having control over your time is the only sensible financial goal.

Older Americans overwhelmingly wish they had worked and less and spent more time with family, going for a walk, sleeping in, and just enjoying life. ... People adjust to material stuff quickly. But losing control of your time makes almost everyone miserable.

Morgan quipped that, "Few people my age will take this advice seriously."

Luckily for us, three bloggers who have retired early did heed similar advice, and have offered up validation of Morgan's point.

The freedom to design my life exactly how I want it. My schedule. My time. It's been amazing.

Financial Independence takes freedom to another level. I have a lot more control of my time. Personally, it's much better than working for a corporation.

And the family of Jeremy, Winnie, and Julian at GoCurryCracker offered up my favorite sound bite:

2 weeks of vacation is nice. 52 weeks is better.

How to get started

If retiring early -- or, better yet, becoming financially independent -- is something you're interested in, the big steps are simple:

Clearly, "simple" and "easy" are not synonymous. So if you're looking for a little motivation, visit the blogs linked above, or check out some previous work here at The Motley Fool on the topic.