Please ensure Javascript is enabled for purposes of website accessibility
Log In Help Join The Motley Fool
Free Article Join Over 1 Million Premium Members And Get More In-Depth Stock Guidance and Research
By Jason Hall – May 31, 2018 at 1:19PM

Since March 1, shares of the leader in natural gas for transportation have surged almost 140%. Here's what's happening.

As is often the case, today's increase isn't tied to anything material that's been reported about the company itself. Clean Energy hasn't issued a press release or made an SEC filing of any note in about a week. And there aren't any rumors -- substantiated or otherwise -- floating around that are directly tied to the company's prospects. 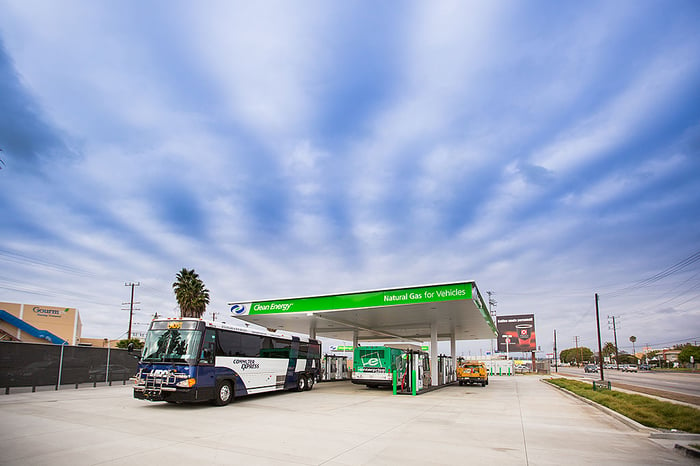 However, there is some potentially positive big-picture news. After word came out late last week that OPEC and Russia were considering increasing their oil output later this year, a more-recent source has indicated that may not be the case after all -- at least not before year-end. And while oil prices haven't exactly surged on the news, they have stabilized after multiple down days since peaking at almost $80 on May 23. Brent Crude futures are at $77.87, up from a low of $75.30 early this week. West Texas Intermediate crude, a major U.S. benchmark, peaked above $72 on May 21, and trades for $67.10 at recent prices.

There's certainly been some correlation so far this year. Since reaching its 52-week low on March 1, Clean Energy's stock price has surged 136%, while diesel prices are up 10% and crude futures are up 16% (indicating diesel is likely to climb even more in the near term): 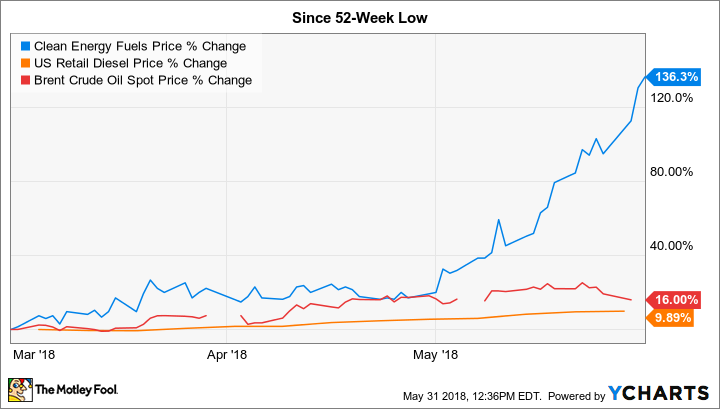 There's a little more to the story in the past couple of months, of course. In early May, Energy giant Total (TTE -6.32%) agreed to acquire a 25% stake in Clean Energy Fuels and to invest in a program to accelerate heavy-trucking adoption of natural gas. Clean Energy shares are up 67% since this announcement alone, which corresponded with the company's first-quarter earnings release.

Put it all together, and there are multiple catalysts that could pay off for Clean Energy and its investors. But as management made clear in the earnings call, it's going to take more than a single quarter for these efforts to bear fruit. And it's possible that the market loses its patience in the near term if the company doesn't start to accelerate growth in coming quarters.

But with a strong balance sheet -- which is about to get stronger with cash from the Total deal -- and expectations that it will be cash flow positive in 2018 after paying off more debt later this year, Clean Energy's prospects in the years ahead look very solid.