Please ensure Javascript is enabled for purposes of website accessibility
Log In Help Join The Motley Fool
Free Article Join Over 1 Million Premium Members And Get More In-Depth Stock Guidance and Research
By Rich Smith - May 31, 2018 at 12:48PM

Corning's losing money now, but Morgan Stanley thinks it could earn $3 a share -- or more.

Hurt by fickle prices for its most visible product -- the glass panes used to create the displays on smartphones and flat-panel TVs -- Corning stock has lost more than 10% of its share price over the past year, even as the S&P 500 has gone up 10%. The stock's done even worse since this year began, hitting a high near $35 a share in January, but losing nearly $10 of that to hit and currently sitting at its lows of the year -- just $26.35 per share, and a near-25% drop.

And yet, small stock prices can spell big opportunities, and Morgan Stanley appears to think this is the case with Corning. This morning, analysts at the NYC-based megabank announced they're upgrading Corning stock to overweight and assigning Corning shares a $34 price target that would take the stock almost all the way back to its highs of January. 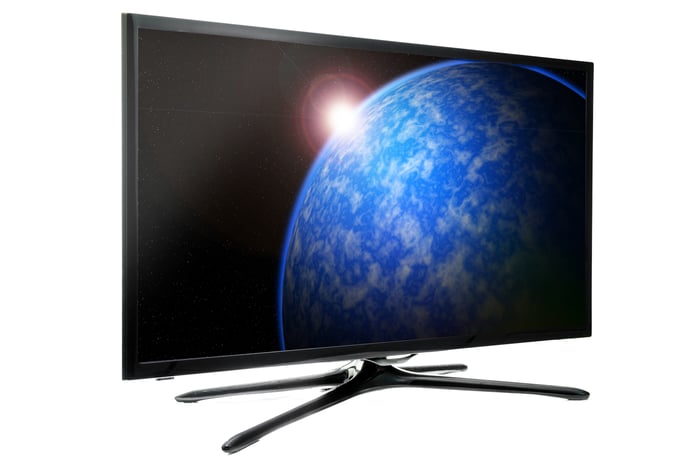 We last heard from Corning on the subject of earnings in April, when the company released its fiscal first-quarter 2018 financial report. "Core net sales" increased 4% year over year in Q1, with 8% growth in the company's flagship optical communications (fiber optics) division, 10% growth in life sciences (laboratory glassware), and 17% growth in environmental technologies (filtration).

Still, Corning managed to lose $0.72 per share for the quarter, hurt by a 5% sales decline in display technologies (for flat screen TVs) and a 7% drop in specialty materials (Gorilla Glass for mobile devices).

Despite this disappointment, Morgan Stanley believes Corning will turn profitable again in relatively short order, as it explains in a note covered by StreetInsider.com (subscription required). As sales of "double-sided glass" enclosures for smartphones, of "Valor glass" vials for the pharmaceutical industry, and of "gas particulate filters" pick up, Morgan Stanley says we will see Corning demonstrate the ability to produce earnings per share of as much as $3 "in the coming years."

In fact, if Corning successfully navigates all of the avenues for growth that Morgan sees open to it, that number could rise by as much as $0.80 extra per share. But even if only the company's fiber-optics and displays businesses stabilize, that alone should be enough to support $3 a share in earnings, says the analyst.

Facts on the ground

How likely is this to happen? According to Morgan Stanley, Corning's display unit, at least, has held up remarkably well despite enduring expected seasonal decline in glass volume shipped, and in the unit prices booked on those shipments in Q1.

Looking forward, the analyst argues that "supply and demand are more in unison" in the display glass market, and despite continually falling prices, "Corning maintains a cost advantage" over its rivals. At the same time, markets where prices are known to continually decline are not the most attractive for new competitors to enter. In Morgan Stanley's view, therefore, Corning doesn't need to fear new entrants into its glass display market, as such suppliers won't commit to build new glass factories until they have customers in hand, offering "committed demand" to purchase their products.

All of which, I have to admit, sounds pretty good for Corning -- and yet I'm still not convinced by Morgan Stanley's argument that the stock is a buy. Here's why:

Morgan Stanley bases its argument in favor of buying Corning stock on a belief that the company can earn $3 a share "in the coming years." Reviewing other analysts' forecasts as polled on S&P Global Market Intelligence, however, it turns out this is not a popular view. Although Corning is expected to turn profitable again this year, the consensus view on Wall Street is that Corning will earn only $0.98 per share this year -- and no more than $2.28 per share two years from now, which as far out as analyst estimates currently reach.

As far as $3 in earnings go, well, Corning has only earned that much once in the past 20 years -- in 2016, when the company sold its 50% stake in Dow Corning, booking a big $2.7 billion gain. That's an event unlikely to repeat any time soon.

As for today, I see Corning as a $24 billion enterprise ($21.9 billion in market capitalization, plus a further $2.1 billion in net debt) with no trailing profits to speak of, and extremely limited free cash flow -- just $200 million last year, and $38 million generated over the last 12 months. True, GAAP profits are expected to return in short order -- and if Corning does beat the odds and start earning $3 a share consistently, with free cash flow to match, then a $34 stock price might not be too much to pay.