You know all the cliches. There's no time like the present. Don't put off until tomorrow what you can do today. Fish or cut bait. Strike while the iron's hot. Just do it.

Our society is geared toward taking action. Sometimes that's not a good thing, but in many cases, it is.

I think those kick-into-gear cliches are very appropriate when it comes to investing in certain stocks. Three that especially stand out in my view are Alphabet (NASDAQ:GOOG) (NASDAQ:GOOGL), Vertex Pharmaceuticals (NASDAQ:VRTX), and Viking Therapeutics (NASDAQ:VKTX). Here's why now's the time to buy these three stocks. 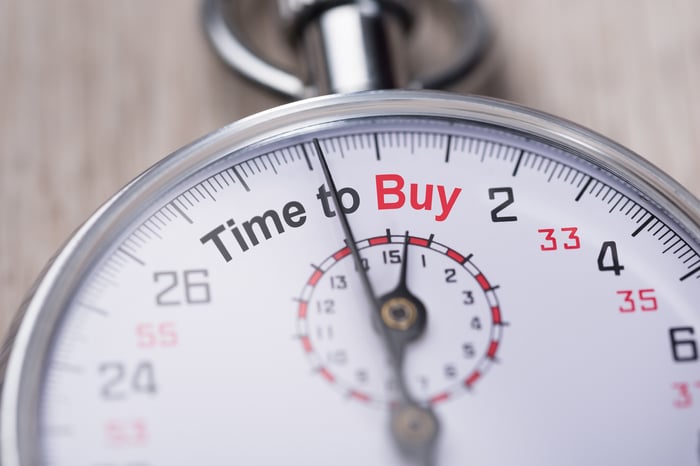 Pretty much any time is the right time to buy Google parent Alphabet -- as long as you don't wait too long. I view Alphabet as one of the best stocks on the market to buy and hold for the long term.

Alphabet's cash cow is its advertising platform that includes Google search engine, Gmail, Chrome, Maps, and YouTube. These products enjoy tremendous market shares. With hundreds of millions of people across the world using its products combined with growth in digital advertising spending by customers, Alphabet appears to be in great shape to keep its momentum going.

But the primary reason I think buying Alphabet sooner rather than later makes sense is that the company is on the verge of seeing some of its "other bets" pay off. One case in point is Alphabet's Waymo self-driving car subsidiary. Waymo is way ahead of the competition in developing self-driving technology. And it could start making money soon: Waymo plans to launch a self-driving taxi service in Phoenix, Arizona, later this year.

Granted, one cab service in one city won't make enough revenue to even be a rounding error for Alphabet. However, I think this will be just the start of a big opportunity for the company. I also expect some of Alphabet's other initiatives -- such as its Verb Surgical joint venture that's developing surgical robots -- could make a splash in the not-too-distant future.

Vertex Pharmaceuticals pretty much has a monopoly right now in treating cystic fibrosis (CF). The biotech's three approved products -- Kalydeco, Orkambi, and Symdeko -- are the only CFTR modulators on the market. CF is caused by genetic mutations that cause CFTR proteins to fold incorrectly. CFTR modulators help ensure that misfolding doesn't happen.

While Vertex's current products are great, I'm even more excited about what could be just around the corner. The biotech is evaluating several triple-drug combinations targeting CF in phase 3 clinical studies. If these combos work successfully, Vertex will be able to increase its target patient population by more than 50%.

It shouldn't take long to find out if the triple-drug combos are as good as Vertex hopes they'll be. The company initiated one phase 3 clinical study in March, and two additional studies of another triple-drug combo in April. These studies are expected to wrap up next year. If the results are positive, Vertex should file for regulatory approval soon afterward.

One key reason I think buying Vertex stock right now is smart is that the share price has pulled back somewhat. The FDA recently placed a gene-editing therapy being developed by Vertex's partner CRISPR Therapeutics for the treatment of sickle cell disease on clinical hold, which means planned clinical testing in humans can't begin yet. I expect this to only be a speed bump for the two biotechs, though, and I think Vertex stock will bounce back soon.

Unlike Alphabet and Vertex, Viking Therapeutics isn't profitable. The biotech still has a good bit of clinical testing to conduct before it even has a chance of winning regulatory approval for any product. But for investors not afraid of taking on some risk, I think now's a great time to buy Viking Therapeutics' stock.

Viking's lead candidate is VK2809. The biotech is evaluating the drug in a phase 2 clinical study for the treatment of high cholesterol and non-alcoholic fatty liver disease. Normally, I wouldn't be overly excited about a clinical-stage biotech that doesn't even have phase 2 results yet. But Viking is an exception.

There are no drugs currently approved for treating NASH. Some predict that the NASH market could reach $35 billion annually in a few years. With this kind of huge opportunity, several big drugmakers are scrambling to develop NASH drugs. I think the positive results for MGL-3196 could make both Madrigal and Viking prime acquisition candidates in the not-too-distant future. And since Viking's market cap is around one-tenth that of Madrigal, the biotech could be especially attractive to bigger players.

What about the cliche that "good things come to those who wait?" I do think investors could wait to buy any of these three stocks and still win over the long run.

However, the problem with waiting to buy stocks is that it's impossible to know how long you should wait. It's not out of the question that Viking could be acquired next week and see its stock skyrocket. Vertex could reach an agreement this summer for reimbursement of Orkambi in the United Kingdom and get a big bump. Alphabet could announce great news from one of its many initiatives.

Maybe none of these things will happen anytime soon. But I like the prospects for Alphabet, Vertex, and Viking. And -- cliche or not -- there really is no time like the present.