It was a big week for the biotech industry with the kick-off of the much-anticipated American Society of Clinical Oncology (ASCO) annual meeting in Chicago. But not all of the excitement stemmed from the ASCO conference. Three of the top biotech stocks this week soared because of totally different catalysts. 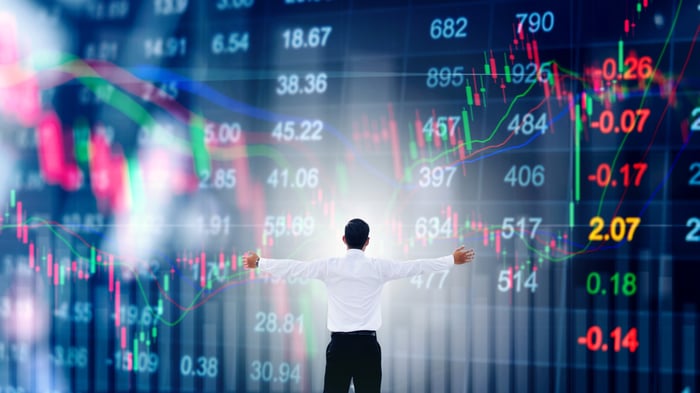 Madrigal Pharmaceuticals stock exploded this week, with the biotech's share price skyrocketing nearly 140%. No stock jumps that much without some really good news. For Madrigal, the really good news related to results from a phase 2 study of its lead candidate MGL-3196 in treating non-alcoholic steatohepatitis (NASH).

On Thursday, Madrigal reported that MGL-3196 met its primary endpoint of reducing liver fat in patients with NASH in the phase 2 study. The biotech also had other positive news. Significantly more patients taking MGL-3196 achieved a two-point reduction in their NAFLD activity score (a measure of the severity of fatty liver diseases) than did patients on placebo. In addition, significantly more patients treated with MGL-3196 experienced NASH resolution than did patients on placebo.

Those results were tremendously important for Madrigal because they could bode well for the chances for success for MGL-3196 in phase 3 testing. There are currently no FDA-approved treatments for NASH. Some predict that the annual NASH market could grow to as much as $35 billion in the coming years.

Viking Therapeutics stock vaulted over 80% higher this week. But Viking didn't announce any clinical results. In fact, the biotech didn't have any news this week. It didn't have to. Madrigal's positive phase 2 results were all Viking stock needed to take off.

Like Madrigal, Viking Therapeutics is developing an experimental drug that holds the potential for treating NASH. Viking's lead candidate, VK2809, is a thyroid hormone receptor beta-selective agonist. So is Madrigal's MGL-3196. Investors immediately recognized that positive results for MGL-3196 increase the likelihood that VK2809 could also be relatively safe and effective.

Viking is currently conducting a phase 2 study of VK2809 targeting treatment of high cholesterol and non-alcoholic fatty liver disease, which includes NASH and other related diseases. Results from this study are expected in the second half of 2018.

Lexicon Pharmaceuticals stock jumped 28% higher this week. Like Viking, Lexicon didn't announce any news. However, the stock's big gains didn't depend on another biotech's success. So, what was behind Lexicon's nice move this week? It's hard to say for sure. My best guess is that the stock moved higher due to a combination of two factors.

One could be that investors are buying up shares in anticipation of FDA approval for Zynquista in treating type 1 diabetes plus short-sellers covering their positions. The FDA accepted the regulatory filing for Zynquista submitted by Lexicon's partner, Sanofi, on May 22. An approval decision is expected by March 22, 2019. Zynquista is expected to attain blockbuster sales levels if approved.

The other potential reason behind Lexicon's gains could be that short-sellers are covering their positions. Nearly half of Lexicon's float was sold short prior to this week.

I have liked Madrigal for several months. The latest clinical results for MGL-3196 make me an even bigger fan of this biotech stock. I'll be surprised if Madrigal doesn't get scooped up by a big drugmaker looking to bolster its NASH pipeline. Phase 2 success doesn't guarantee that MGL-3196 will perform well in phase 3 studies, but I'm optimistic about the drug's prospects.

Viking Therapeutics hasn't been on my radar screen so far, but it definitely is now. I suspect that Madrigal's success opens the door for Viking to enjoy a similar run. Granted, Viking is still a risky stock. Just because its lead candidate has a similar mechanism of action as Madrigal's NASH drug doesn't mean VK2809 will be as successful as MGL-3196. However, I'm going to go out on a limb a bit and pick Viking as a stock to buy for investors who aren't afraid of high-risk and, potentially, high-reward propositions.

That leaves Lexicon. If my hunch is right that we're seeing short-sellers cover their positions, Lexicon stock could move even higher. More importantly, I like the prospects for Zynquista and Xermelo, the biotech's carcinoid syndrome diarrhea drug that launched in March. My view is that Lexicon has a lot of potential that the market isn't pricing in yet.