NVIDIA (NASDAQ:NVDA) and Advanced Micro Devices (NASDAQ:AMD) are benefiting enormously from a growing PC gaming market, as esports and popular multiplayer titles are driving up demand for high-end graphics cards.

Let's review the key trends impacting the PC gaming industry and why investors looking for exposure to this opportunity may want to consider indirect plays like NVIDIA and AMD. 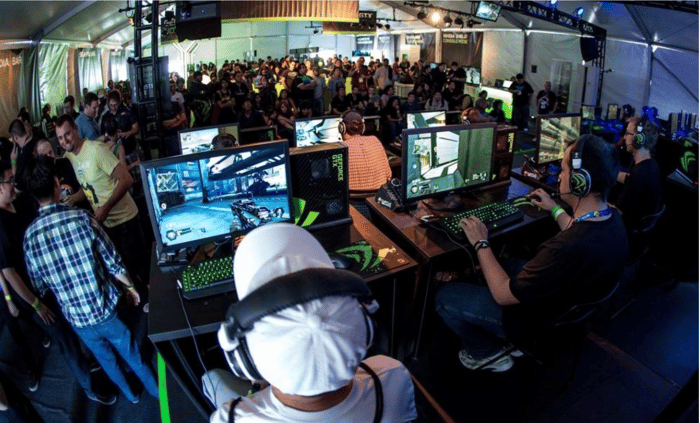 Esports is quickly becoming mainstream entertainment for millennials, and it's benefiting the PC as a gaming platform, because most esport tournaments are played on PCs. Additionally, game streaming on YouTube and Twitch -- in which people are tuning in to watch others play games -- is also serving to highlight the advantages that PC has over other platforms for hardcore gamers.

On NVIDIA's first-quarter conference call, CFO Colette Kress summarized key factors that are fueling the company's performance, which also speaks to AMD's performance as well: "Gamers are increasingly engaging in social gameplay, and gaming is rapidly becoming a spectator sport, while the production value of games continues to increase. This dynamic is fueling a virtuous cycle that expands the universe of gamers and drives a mix shift to higher-end GPUs."

What Kress described here is not a temporary uptick in demand that will only last a short while. She's referring to a global, growing gaming audience that's spending more time playing multiplayer titles like Fortnite and PlayerUnknown's Battlegrounds -- two of the most popular games over the last year.

There's estimated to be more than one billion people who play games on PC. Specifically, NVIDIA estimates there are about 200 million users of its GeForce GPUs. That's twice what NVIDIA reported three or four years ago. With more people playing, game makers are able to invest in bigger and better experiences knowing that they can sell enough copies to recover their investment. More gamers means better games, and in turn, that attracts even more consumers to the market.

Another factor, which Kress alluded to, is that gaming is quickly becoming a social activity. A 2017 Nielsen survey found that 67% of gamers play to be social, which shows how gaming is turning into a very sticky activity. Once gamers start having fun playing with friends online, they begin to return every day for their entertainment.

At the same time, you can't be competitive unless you have the best hardware. This is why gamers are trading up to more powerful, higher-end GPUs. As gamers upgrade, selling prices are increasing, which is helping NVIDIA and AMD expand their gross margin. This has been an ongoing trend lately. In the first quarter, AMD's gross margin increased 400 basis points year over year to 36%, while NVIDIA's margin grew 510 basis points over the year-ago quarter to almost 65%.

Soaring revenue and expanding margins have been juicing the bottom line. NVIDIA's earnings per share grew a whopping 151% in the first quarter, while AMD's margin improvement turned a year-ago loss into a profit of $0.08 per share.

This cycle may last for several years

While the two chipmakers are moving into other markets like data centers, gaming still makes up the majority of the top line for both companies. Note that AMD's computer and graphics segment also includes sales of its central processing units (CPUs) in addition to GPUs.

With the number of PC gamers expected to grow 40% to 1.4 billion by 2020, there should continue to be strong demand for high-performance graphics cards. Looking further out, NVIDIA CEO Jensen Huang believes there could be another one billion people playing games in the next 15 years.

All told, gaming will likely remain the primary driver of revenue growth for both companies in the foreseeable future. For people who are looking for other ways to invest in the growing video game industry besides notable names like Activision Blizzard and Electronic Arts, the leading chip suppliers, NVIDIA and AMD, are solid options to consider.