Ford Motor Company (NYSE:F) said on Monday that it has begun testing an on-demand "self-driving" delivery service in south Florida.

Ford has been working with Domino's Pizza (NYSE:DPZ) and Postmates, an urban delivery start-up, to test the potential of deliveries made by self-driving vehicles. Ford and Postmates have enlisted more than 70 local businesses in Miami and Miami Beach to participate in this latest pilot program, in which a vehicle made to look like it's self-driving makes real deliveries to Postmates customers. Thinking that what Miami really needs is an automated taco truck, Ford and Postmates have teamed up to develop a self-driving delivery van. Image source: Ford Motor Company.

Not yet -- the technology isn't quite ready for that. (That's why "self-driving" is in quotes above.) The vehicle is designed to look like it's self-driving, but it really has a human driver. That's OK for now, because this pilot isn't about testing the self-driving technology itself. Rather, as Alexandra Ford English of Ford's Autonomous Vehicle Business Team said, Ford's research is focused on "the first and last mile of the delivery experience" -- the parts in which humans need to directly interact with the vehicle.

So what is this thing, then?

It's a Ford Transit Connect, a small commercial van, that has been modified to look like it's self-driving -- and modified to make deliveries without a human. The vehicle contains several "lockers," each of which can hold a thing to be delivered -- a food order, for instance. (The lockers are of different sizes, because Ford is testing which size[s] work best for Postmates' business.)

Upon meeting the vehicle at the curb, consumers enter an access code into the touch screen and the appropriate locker will open. Audio prompts direct the interaction and lights will illuminate the designated locker. We're making interactions with the vehicle as easy as possible through various sensory technologies built into the Transit Connect. 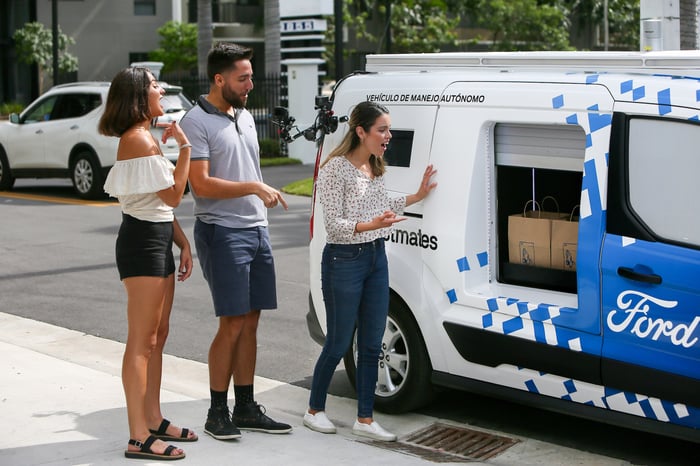 One goal of the pilot is to figure out how best to hand off the van's delivery to humans. Image source: Ford Motor Company.

Ford is steering clear of taxis, for now

Lots of automakers are gearing up to launch self-driving vehicles of various kinds. Perhaps the most prominent effort is at Ford's old rival General Motors, which intends to begin mass-producing a self-driving taxi based on its Chevrolet Bolt EV next year, but there are plenty of others.

Sensing that self-driving taxis might become a crowded niche, Ford is aiming its own effort in a different niche that plays to its strengths. Ford is one of the world's leading makers of commercial vehicles, a dominant player in both the U.S. and Europe and a strong one in China. It makes sense that it would develop a self-driving vehicle aimed at its existing commercial-fleet customers.

That's why Ford has said that its first mass-produced self-driving vehicle, coming in 2021, will be a commercial vehicle of some kind. It will most likely a smallish urban-focused vehicle similar to the modified Transit Connect van it's using in this pilot with Postmates. Tests like this one not only help Ford figure out how best to design its vehicle, they also serve to show potential customers how they could use self-driving Fords in their own businesses. 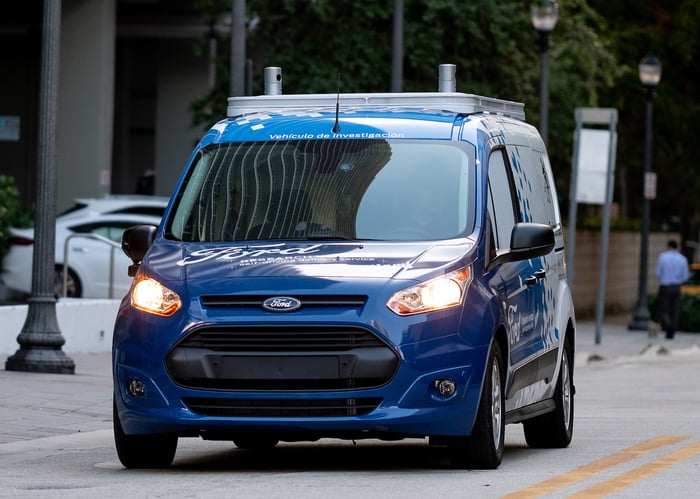 It's not really a self-driving van, but it's intended to look like one, with twin lidar units on its roof. Image source: Ford Motor Company.

Ford isn't going to be first to market with a self-driving vehicle. But when it does come to market, likely in 2021, the plan is to have a carefully thought-out product that can be put to work serving Ford's commercial-fleet customers right away.

As with the self-driving pizza-delivery test that Ford began with Domino's last year, this test might look kind of silly at first glance. But as with the Domino's test, there's a real point to this, and a real value -- even if, for now, the "self-driving" vehicle is piloted by a human.

The upshot for investors is this: Ford is being careful and smart about how it brings its self-driving technology to market. For now at least, it's steering clear of the ridesharing business, which could turn into a race for the lowest possible profit margin, in favor of vehicles that can serve its customers in markets it already knows very well. It's a decision that could look like a very smart one a few years from now.