It's a new pilot program with Domino's Pizza and Postmark. Here's what Ford hopes to get out of it.

Ford said on Tuesday that it is beginning pilot autonomous-vehicle testing programs to Miami, in collaboration with urban delivery start-up Postmates and Domino's Pizza (DPZ -0.40%), to help it learn more about how humans interact with commercial vehicles that drive themselves. 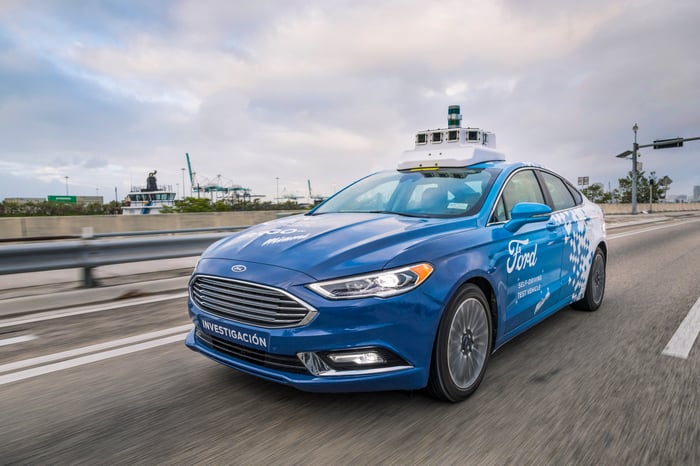 What Ford said: This is a research effort

In a Medium post, Ford autonomous-vehicles chief Sherif Marakby said that for now, Ford's goal is to learn more about how humans interact with self-driving delivery vehicles at all points of its journey:

The types of questions we're trying to answer include:

-- Before a self-driving vehicle makes a delivery, how will employees stock it and send it off?

-- At the end of its journey, how will customers interact with the vehicle to retrieve their food or groceries, and how far from their homes are they willing to walk to get it?

-- What benefits could and should people get from a self-driving experience?

These aren't simple questions to answer. Marakby said there will be trade-offs in moving from human-driven to self-driving commercial vehicles:

Today, deliveries can be made to someone's door, though there is usually an extra charge involved. Oftentimes, drivers illegally double-park when they can't find a space, potentially causing traffic congestion for others. A self-driving vehicle won't need to be tipped and it won't park illegally. So, from the outset we understand there are both hurdles and benefits to self-driving delivery in cities and we intend to learn all of these ins and outs so that we can serve people in a way that's most intuitive and convenient.

The pilot program with Domino's builds on the lessons learned from Ford's experimental self-driving delivery effort with Domino's in Ann Arbor, Michigan, which began last year. The Miami test with Domino's has already begun, Ford said; its test with Postmates will begin next month.

At least at first, Ford plans to operate a small number of self-driving delivery vehicles from a new "autonomous vehicle operations terminal" near downtown Miami. More vehicles, more partners, and more cities could be added in time, Marakby said. 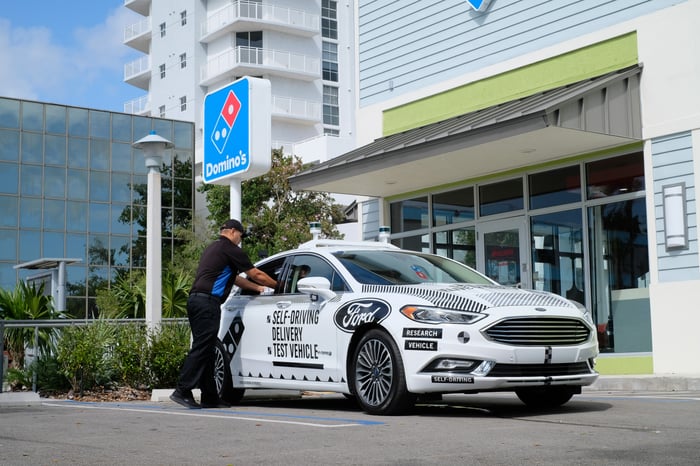 A Domino's employee loads food into a self-driving Ford delivery vehicle. Part of Ford's research involves understanding the interactions between its self-driving vehicles and the workers who load and dispatch them. Image source: Ford Motor Company.

Laugh it up, but this is important stuff for Ford

Ford's initial test with Domino's in Ann Arbor was presented in a lighthearted way, but that test -- and these new pilot programs in Miami -- have a serious business purpose: Ford wants to understand, at a very deep level, what its customers will want out of a self-driving vehicle.

This isn't just pie-in-the-sky stuff, either. Ford is planning to begin production of its first commercial self-driving vehicles in 2021. The market for such vehicles could be huge, and Ford could be in position to win a big slice of it -- if it comes up with a winning design that works well with both human customers and the humans who will have to load and dispatch the vehicles.

That's what these pilot programs are about. Ford is at work learning the things that will help it come up with the best possible designs for its self-driving commercial vehicles so it can continue to be a dominant player in commercial vehicles once those vehicles have learned to drive themselves.