Tesla (NASDAQ:TSLA) said on Tuesday that it will lay off about 9% of its employees, or about 4,100 people, the latest in a series of moves intended to help the struggling electric-car maker realize a long-elusive goal: sustainable profitability. 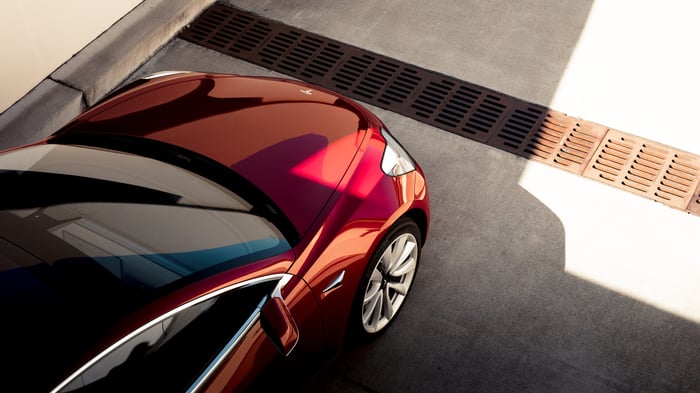 Tesla has hundreds of thousands of reservations for its Model 3, a groundbreaking all-electric premium sedan. But filling those orders has proven to be a tremendous challenge for the company. Image source: Tesla, Inc.

How Musk explained the move to employees

In an email sent to all Tesla employees and subsequently made public, CEO Elon Musk made clear that the cuts will not include workers on the company's automotive production lines.

As part of [an ongoing restructuring] effort, and the need to reduce costs and become profitable, we have made the difficult decision to let go of approximately 9% of our colleagues across the company. These cuts were almost entirely made from our salaried population and no production associates were included, so this will not affect our ability to reach Model 3 production targets in the coming months.

Musk went on to explain that while Tesla isn't motivated by profit, the reality is that it has to demonstrate that it can be sustainably profitable at some point.

What can we learn from this?

What we can learn from Musk's email

First, Musk's email makes clear that the layoffs are not a sign that Tesla's attempt to automate the Model 3 production line has suddenly become successful. Tesla has struggled for months to implement Musk's highly automated vision for Model 3 manufacturing, amid signs that the notable quality defects in early Model 3s were a result of the automation attempt.

Has Tesla suddenly turned it around? No: "production associates," Tesla's term for assembly line workers, aren't included in the layoffs.

There's another point of interest: Another part of Musk's email raises some doubt about the future of Tesla's solar business:

In addition to this companywide restructuring, we've decided not to renew our residential sales agreement with Home Depot in order to focus our efforts on selling solar power in Tesla stores and online.

It's an abrupt turnaround, as Tesla's deal with The Home Depot (NYSE:HD) was just announced in February. But as my colleague Travis Hoium pointed out at the time, booths in retail stores haven't been much of a driver of residential solar sales in the past. It's possible that Musk looked at the early returns and decided it wasn't worth continuing.

But it's also possible that Tesla's solar business, acquired in 2016 when Tesla bought Solar City for $2.1 billion in stock, will be sharply cut back or even shut down as part of Musk's attempt to make Tesla sustainably profitable.

The simple takeaway is that Tesla is in trouble. Laying off 9% of workers isn't generally a sign that everything's going great. But how much trouble?

Musk has said repeatedly that Tesla won't need to raise additional cash to get to profitability. But even analysts who have long been bullish on Tesla have had trouble swallowing that idea, not least because Tesla has some large debt payments coming due soon.

Notably, longtime Tesla bull Adam Jonas of Morgan Stanley said bluntly in a note last month that he thinks Tesla will need to raise $3 billion in the third quarter, with half of that going to pay down debt.

One possibility here is that Musk really believes that, with enough belt-tightening, Tesla can squeak through -- that if he can finally get the Model 3's production line up to full speed, the car will generate enough cash to pay down the company's debts. Another possibility is that Musk's discussions with potential funding sources and underwriters haven't gone well, and he's playing the hand he has as best as he can.

Both things could be true, of course. And it's not out of the question that Musk will pull it off -- that he will steer Tesla safely to profitability without needing more capital.

But I struggle to find an explanation for this 9% layoff that is in any way bullish for Tesla investors.