Please ensure Javascript is enabled for purposes of website accessibility
Log In Help Join The Motley Fool
Free Article Join Over 1 Million Premium Members And Get More In-Depth Stock Guidance and Research
By Keith Speights - Jun 13, 2018 at 6:01AM

Even with falling sales, Humira should still rank as the top-selling drug in the world in 2024.

The company's top-selling drug, Humira, will begin to face biosimilar competition in Europe later this year. In early 2023, biosimilars to Humira will hit the U.S. market. There's no doubt that sales for the drug will decline over the next few years. That's the bad news.

But it's also good news for AbbVie. How? The rate of decline isn't projected to be very great, according to a report recently published by market research firm EvaluatePharma.

Sales for Humira are expected to decrease by 3% annually through 2024. As a result, EvaluatePharma thinks Humira will still rank as the No. 1 best-selling drug in the world seven years from now, despite lower revenue. That's good -- even fantastic -- news for AbbVie. 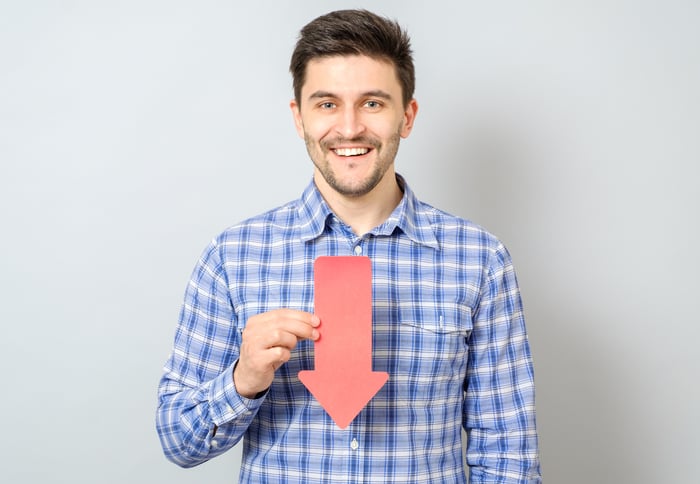 Humira of the future

In 2017, AbbVie reported Humira sales of $18.4 billion. The drug generated 65% of the company's total revenue. Humira claimed a market share of 34% last year in the global anti-rheumatic products market, according to EvaluatePharma.

Fast-forward to 2024. EvaluatePharma projects that Humira's total sales will drop to $15.2 billion. And that figure includes the portion of revenue belonging to Esai, AbbVie's partner in Japan. Humira's market share is expected to fall to less than 27%.

Still, Humira should be able to easily hold on to the No. 1 spot among the best-selling drugs in the world. Merck's Keytruda is projected to be a distant second, with estimated sales in 2024 of $12.7 billion.

The big reason Humira will maintain its position at the top is the U.S. market. U.S. sales of the drug are projected to be around $12.2 billion in 2024. That's not much lower than Humira's 2017 U.S. sales of nearly $12.4 billion. Will Amgen's (AMGN 0.61%) biosimilar Amjevita, which will go on sale in the U.S. effective Jan. 31, 2023, really make that small of a dent in Humira's sales? Not really. The impact will be greater than the 2024 projections indicate.

AbbVie expects U.S. sales of Humira will increase over the next few years. The company predicts that total sales of the drug will approach $21 billion by 2020. This means sales for Humira will be like an accordion -- expanding then contracting.

These projections from EvaluatePharma confirm how good the deal with Amgen made last September really was for AbbVie. The company was able to do exactly what it wanted: Buy time.

Upadacitinib provides a great example of what this additional time for Humira without U.S. biosimilar competition gives AbbVie. The drug could win FDA approval for treating rheumatoid arthritis in 2019. EvaluatePharma projects that upadacitinib will be the No. 5 best-selling anti-rheumatic product in the world by 2024, with sales of nearly $2.6 billion. That amount by itself makes up a big chunk of the gap in annual Humira revenue in 2024 compared to 2017.

But AbbVie also has another successor to Humira that could launch next year. In April, the company submitted for FDA approval of risankizumab in treating psoriasis. The drug is also being evaluated in a phase 3 study for the treatment of Crohn's disease. EvaluatePharma projects that risankizumab could generate annual revenue of $2.1 billion by 2024.

The Amgen deal also bought time for AbbVie's existing products to ramp up sales considerably. Hepatitis C drug Mayvryet is expected to generate annual revenue of nearly $2.9 billion by 2024. Cancer drug Venclexta could rake in $2.8 billion by 2024, although AbbVie will share some of that revenue with its partner, Roche.

AbbVie's biggest-selling drug other than Humira, Imbruvica, should also enjoy strong momentum. EvaluatePharma thinks Imbruvica will be the No. 4 cancer drug in the world by 2024, with sales topping $9.5 billion. However, that total includes revenue made by AbbVie and Johnson & Johnson.

While 2024 is still years away, it's not far enough in the future to fully understand AbbVie's prospects. The company will still only be in the early stages of declining sales for Humira then. Even with falling sales for Humira, though, AbbVie expects the drug to generate significant cash flow throughout the next decade.

AbbVie will certainly have bad news on the way once biosimilar rivals begin taking a bite out of Humira's market share. But because of the timing of that bad news, the big pharma company should be in fantastic shape -- through 2024 and beyond.