Please ensure Javascript is enabled for purposes of website accessibility
Log In Help Join The Motley Fool
Free Article Join Over 1 Million Premium Members And Get More In-Depth Stock Guidance and Research
By Neha Chamaria - Jun 13, 2018 at 9:15AM

If you can't decide what to do with Caterpillar stock now, read this.

Caterpillar's (CAT 0.95%) recent operational performance doesn't leave any room for complaints, nor does its near-term outlook. In fact, the heavy-machinery giant recently earned its highest-ever first quarterly profit in history, and that's no mean feat for a company that's been around for 93 years.

Ironically, those record-high profits are where the market sees a problem, and it just doesn't seem confident about Caterpillar's prospects anymore, as evidenced by the stock's lackluster performance in recent months. Are the market's fears rational, or is Caterpillar stock giving out clear "buy" signals at its current price?

How Caterpillar spooked the market

Yet, Caterpillar shares climbed soon after the earnings release, only to drop just as quickly when one of CFO Brad Halverson's remarks at the company's earnings call made the headlines. Here's what he said: "The outlook assumes that first quarter adjusted profit per share will be the high-water mark for the year." 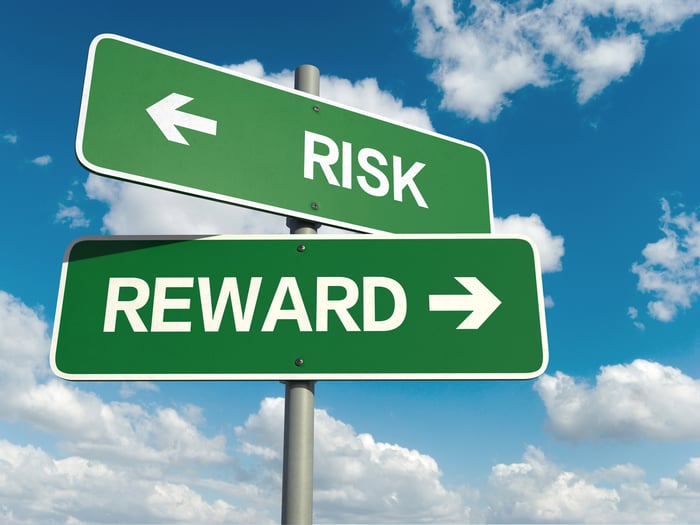 The market was quick to judge the "high-water mark" comment as a hint that the industrials cycle is, perhaps, peaking, and that growth won't come easy for Caterpillar from here on. Those assumptions may be partly right.

Caterpillar critics are focused on this one point

Expectations largely drive stock price movements during the earnings season. So, while the market initially cheered Caterpillar's better-than-estimated numbers last quarter, Halverson's remark also meant that analysts may have to temper their future expectations, especially after Caterpillar also emphasized that it doesn't "expect to repeat first-quarter operating margin at the consolidated level."

In other words, Caterpillar's sales and profits will rise through the rest of the year, but so will costs. Management gave three reasons for this:

The first point in particular spooked the market, but you shouldn't panic -- for a couple of reasons.

First, cost inflation isn't a company-specific concern. Manitowoc (MTW -4.50%), for instance, pointed out last quarter how higher material, particularly steel, and labor costs are proving to be notable headwinds, compelling the company to bank on product price increases to tide over the challenges.

Second, Caterpillar had already given out segment-wise margin projections for the long run during its Investor Day presentation last September, as below:

Here's how Caterpillar's segments fared in the first quarter of 2018 versus Q1 2017. Q1 was clearly an exceptionally strong quarter, with margins from Caterpillar's construction-and-mining equipment (resource industries) businesses climbing at a better-than-expected clip to top the company's own long-term targets, thanks mainly to strong sales volumes and higher prices. It's therefore unfair to blame Caterpillar for not expecting the trend to continue. However, not once did management hint at a slowdown in sales or profits, and it's the market's fault to have assumed the extraordinary pace of growth in the first quarter as a new normal for Caterpillar.

What this means for Caterpillar investors

It's important to understand that Caterpillar's top- and bottom-line growth in recent quarters is still coming off a low base as its earnings cycle started to reverse course only in 2017, which is why the company has consistently topped analysts' quarterly estimates by big margins. Caterpillar's fiscal 2018 guidance of GAAP EPS of $9.75 to $10.75 compared with its prior-year earnings of only $1.26 per share explains what I mean by coming off a low base.

Obviously, this pace of growth is not sustainable, and it will likely normalize with time. What matters is the trend in Caterpillar's sales, the best gauge for which, perhaps, is the worldwide retail machinery sales statistics for the previous quarter, which the company releases every month. The chart below shows how Caterpillar's retail sales picked up slack last year and continue to grow at solid double-digit rates. 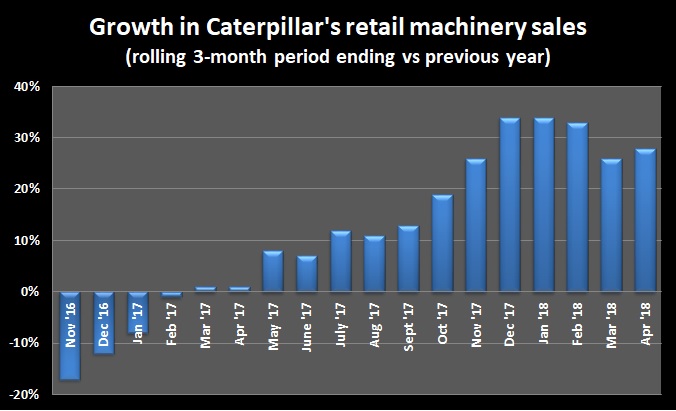 The most important point to remember is that demand for equipment from each of Caterpillar's key end markets -- construction, mining, oil and gas, and transportation -- is strong, which means it's a broad-based recovery and, hence, likely more sustainable.

Moreover, Caterpillar is squeezing out greater profits from sales than it ever did thanks to aggressive cost-cutting, operational efficiencies, and share repurchases. 2012, for instance, was a banner year for the company as it generated record sales worth $65.88 billion. Yet, it earned a profit of only $8.48 per share off of it. Comparatively, Caterpillar is guiding for what could be its highest-ever EPS for fiscal 2018 on a much smaller revenue base. This matters because cost efficiency is the key to survival and growth for any cyclical company.

Thanks to its restructuring efforts in the past couple of years, Caterpillar is leaner and stronger than ever before. The company continues to generate solid cash flows, it earned enough operating income to cover its interest on debt six times over in the past 12 months, and is on its way to increase its dividends for the 25th consecutive year. That positions Caterpillar solidly to play the upturn and fetch long-term investors strong returns even at its current valuation of 18 times price to operating cash flow.