Zelle is just 20 months old, but it's already poised to take over as the most popular peer-to-peer payments app in the United States. Zelle is a payments app developed by a network of over 30 U.S. banks, and it had nearly 16 million users last year, according to estimates from eMarketer. The researcher expects Zelle's user count to climb past PayPal's (NASDAQ:PYPL) Venmo this year, reaching 27.4 million users to Venmo's 22.9 million. Square's (NYSE:SQ) Cash App will remain in third place, with 9.5 million users, after ending last year with 7 million users.

Indeed, Zelle is growing quickly, benefiting largely from being built into the apps of the 30 banks that support it. In the first quarter, it transferred more than twice as much money as Venmo. Getting more users to use Zelle could mean serious cost savings for banks, so they're pushing it hard with lots of advertisements and prominent placement in apps. eMarketer expects the continued growth of Zelle to result in slowing growth for both Venmo and Cash App, which would be a major blow to two of the most promising products at each company. 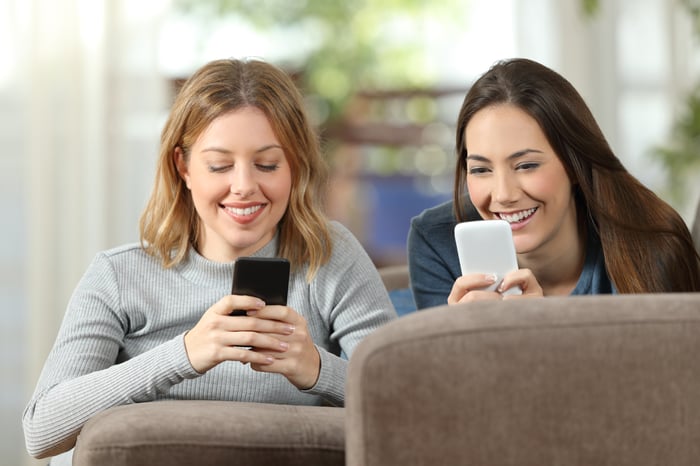 Why banks want you to use Zelle

There are real costs to transferring money around from one account to another. Zelle offers one of the least expensive ways for banks to move money.

Paper checks, debit cards, and even withdrawing cash from an account have costs. Banks have to print and issue checks, they have to pay fees for debit cards, and they might have to reimburse ATM fees or pay a human teller to get cash to their customers. Checks could also bounce if consumers aren't paying attention to their accounts, creating a nightmare for customers and the customer service representatives that have to deal with them. Zelle will ultimately save money for the banks.

Zelle also adds value to checking accounts. While Venmo and Square Cash offer instantaneous transfers, users have to pay an additional fee for the benefit. Zelle offers instant transfers standard. Of course, consumers may end up paying more for that benefit in the form of bank fees, since banks could use Zelle as a selling point for their accounts. Still, savvy consumers should be able to find a participating bank without fees or otherwise keep their accounts fee-free.

The impact certainly hasn't shown up yet

Although Zelle is seemingly off to a strong start, it hasn't really had an impact on Venmo or Cash App.

Venmo just posted its best quarter ever of net new active users. It also saw total payment volume grow 80% year over year in the first quarter. That's a slight slowdown from the 86% growth it posted in the fourth quarter and 97% growth for full-year 2017, but not enough to cause concern.

Meanwhile, Cash App has consistently ranked in the top 25 in the app stores and that number is steadily climbing. It's also the No. 1 finance app.

So, if Zelle is going to stop users from continuing to flock to Venmo and Cash App, it needs to do more than offer instant transfers.

There's no doubt Venmo and Cash App are important products for their respective companies. PayPal says peer-to-peer users have twice the lifetime value as non-users. Square is just getting started in its monetization efforts with Cash App, but it could be huge. So seeing some form of protection from Zelle will be key to investors.

Cash App has an excellent layer of protection from Zelle. Square is catering the app more and more to the unbanked and underbanked community. Management constantly talks about that as part of the strategy with Cash App, and the basis behind ideas like allowing consumers to receive direct deposits or issuing the Cash Card to allow using the Cash App balance anywhere. If a consumer doesn't have a bank account, Zelle simply isn't even an option.

Venmo caters more toward consumers with established bank accounts, but offers a social aspect. It requires users to provide a note of what they're paying for, and produces a feed of what all your friends are spending money on. That can make the app more fun than just the utilitarianism of Zelle. Still, it's not nearly as big of a competitive advantage compared to Square's app.

In my opinion, Zelle is a greater threat to Venmo than Cash App. eMarketer's analysts seem to disagree, projecting outsize growth for Venmo compared to Cash App going forward. Perhaps I'm underestimating the value of Venmo's network effect. Investors should pay attention to any commentary from management on slowing user growth for their respective peer-to-peer apps, but I don't think Zelle is as big of a threat as eMarketer and others say it is.

How Big of a Threat Is Zelle to Square's Cash App and Venmo? @themotleyfool #stocks $SQ $PYPL Next Article
Current