General Motors (NYSE:GM) said on Monday that it will spend $175 million to retool a Michigan factory to make two upcoming new Cadillac sedans.

Yes, sedans. While rival Ford Motor Company (NYSE:F) plans to replace most of the sedan and hatchback models it sells in the U.S. with SUVs, GM is following a different path -- despite the fact that Cadillac's U.S. sedan sales fell 27% last year.

The two new Cadillac sedans coming to the Lansing Grand River factory will replace three current Cadillac models: The compact ATS and the midsize CTS, both of which are built at Lansing Grand River now, and the larger XTS, which is built at a GM plant in Ontario. The big Cadillac CT6 sedan is unaffected.

Lansing Grand River employs about 2,000 workers, and no jobs will be lost as a result of the changes. 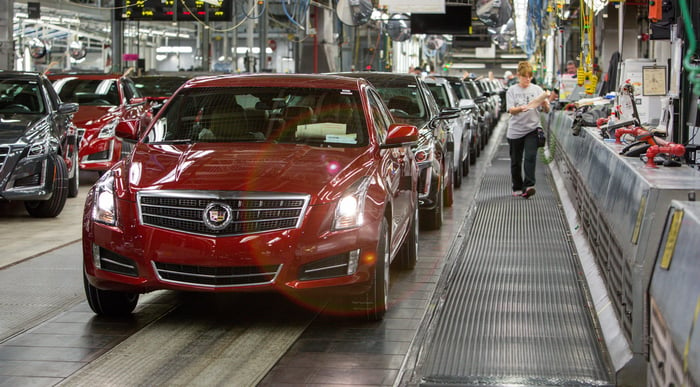 Lansing Grand River is GM's newest U.S. assembly plant. Opened in 2003, it was originally designed to build what was then a new generation of rear-wheel-drive Cadillac sedans. Today, it builds the successors to those sedans, the (rear-wheel-drive) ATS and CTS, along with a rear-wheel-drive Chevrolet, the Camaro coupe.

The ATS and CTS were hailed as nimble, well-built sports sedans when they were first launched, but sales of both have declined significantly as luxury-vehicle buyers have migrated to crossover SUVs. U.S. sales of the ATS and CTS were off 39% and 35%, respectively, last year.

The third Cadillac to be replaced, the larger XTS, is a softer-riding model built on a platform shared with the big Chevrolet Impala. It's still a popular fleet choice, and it has found a following in China. But it's also in decline: U.S. sales of the XTS fell 27% in 2017.

Clearly, GM has decided that it's no longer worth investing in four overlapping sedans for its luxury brand.

What we know about the new Cadillacs

The upcoming new Cadillac sedans will probably be called the CT4 and CT5, in line with Cadillac's current alphanumeric naming scheme. Spy photos of a disguised vehicle that might be a prototype CT5 suggest that it will share styling themes with the well-received Cadillac Escala show car, which was presented in 2016 as a preview of the brand's future styling direction. 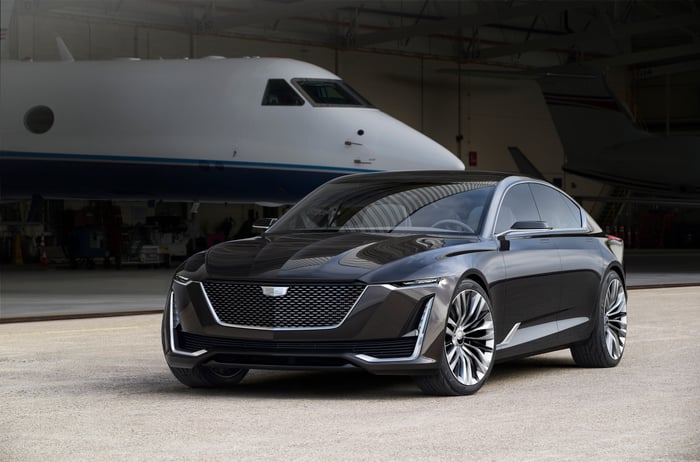 The striking Cadillac Escala show car from 2016 was said to be a preview of the brand's future styling themes. Image source: General Motors.

GM is planning to launch seven new Cadillacs, with one coming every six months on average, between now and 2021. A large Cadillac crossover SUV, likely to be called the XT7, will be the next to debut, late this year or early in 2019 -- but the CT5 could be the Cadillac that follows the XT7, sometime next year.

The upshot: GM thinks it's still worth investing in luxury sedans

It's significant that GM is planning to offer a range of Cadillac sedans long term. Of course, most of those other upcoming Cadillacs will be SUVs or crossovers. Those are expected to include a new model one size down from the XT4, as well as an all-new version of the big Cadillac Escalade SUV. The new Escalade will be built on GM's all-new truck architecture, set to debut with the 2019 Chevrolet Silverado pickup late this year.

GM's long-term plan for Cadillac is to elevate the brand's sales and profitability, a step toward diversifying away from GM's historic reliance on truck and SUV sales in the United States for the bulk of its profits. To succeed, the plan will require great products along with great marketing to elevate luxury-car buyers' perceptions of the Cadillac brand.

The products, including these two new sedans, are on the way. Once they're launched, we'll find out if Cadillac's marketing team is up to the brand-building task.