Since Matt Maddox took over as CEO of Wynn Resorts Limited (NASDAQ:WYNN) earlier this year, the company has gone through a rapid transformation. Founder and former CEO Steve Wynn was ousted and sold all of his shares, Maddox scaled back expansion plans in Las Vegas to focus on Asia, and the company is powering forward on its next resort near downtown Boston.

It's the Boston resort that could be Maddox's biggest challenge over the next year. A new lawsuit has popped up and regulators are still looking into Steve Wynn's sexual misconduct allegations and how they impact the company's gaming license. If Maddox can navigate Wynn Resorts through these challenges, he may have a huge East Coast win on his hands. 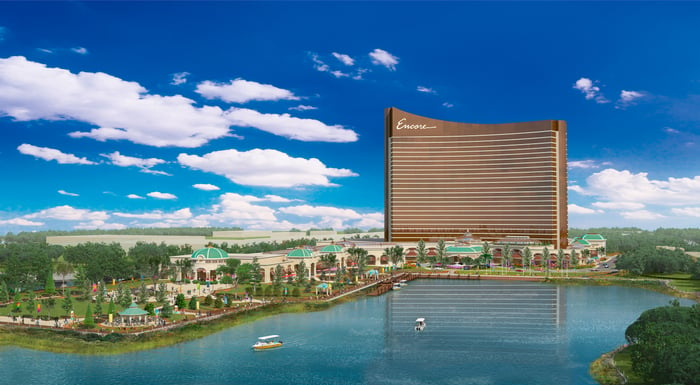 We've known for months that Massachusetts regulators are investigating Wynn Resorts and former CEO Steve Wynn, down to how the corporation may have enabled Steve Wynn or created a culture that enabled misconduct. Maddox and team are charging forward in Boston, despite the investigation, which is a risk. If the license is pulled, the state may force Wynn Resorts to sell the resort.

Another lawsuit popped up recently, this time from one of the minority owners of the land Wynn Resorts bought to build the $2.5 billion Encore Boston Harbor. As part of the land sale, Massachusetts Gaming Commissioner James McHugh stated the sale price could be "no more than $35 million," down from an original price of $75 million, due to an owner with ties to organized crime. Anthony Gattineri, who was a minority owner of the property, filed suit saying he didn't sign off on the reduced price. We don't know how this lawsuit will end, but it's another challenge for Maddox and company. Amid these legal challenges, Bloomberg and The Wall Street Journal (subscription required) have reported that Wynn Resorts has considered selling Encore Boston Harbor to MGM Resorts (NYSE:MGM), the other gaming license holder in Massachusetts. A sale would be complex given what Wynn Resorts has already spent and the MGM Springfield site MGM Resorts has nearly opened (which would most likely need to be sold), but Maddox may want to get rid of the headache.

While the new resort has been a challenge and will continue to be, the upside for Wynn Resorts could be worth fighting for, and that's why Wynn Resorts is still investing billions in the project.

Encore Boston Harbor could be a big win

Why is a single resort worth all of this work? For Wynn Resorts, it could be a huge win financially.

Encore Boston Harbor will likely compete with hotels in nearby downtown Boston, where according to Statista the average hotel room went for $290 per night in 2016, a figure Encore could exceed by a wide margin. If we assume the resort can command just an average price on the low end, it could generate $69 million of revenue from the hotel alone from 650 rooms.

On the gaming side, Boston is an unknown gaming commodity, but nearby Connecticut's Mohegan Sun and Foxwoods casinos generated a combined $1.1 billion in slot win in 2017 alone. It's not inconceivable that Encore Boston Harbor could generate $550 million, or more, in gaming revenue once open. To put that into context, table game and slot win at Wynn Las Vegas was $684.6 million in 2017, so Boston may be in the same ballpark.

We don't know how much revenue or EBITDA (a proxy for cash flow from a resort) Encore Boston Harbor will generate when it opens, but the number could be big. Last year, Wynn Las Vegas generated $522.4 million in EBITDA on $1.68 billion in revenue. I think that's at the high end of what the smaller Encore could bring in, but if it can generate over $1 billion in revenue and hold an EBITDA margin of 35% like Las Vegas, the property could generate a solid return and be a big win for Wynn Resorts. That's why it's worth the headaches and hurdles Maddox is trying to clear right now.