An executive shuffle hints at intriguing possibilities for GM investors.

General Motors (GM 5.55%) is shaking up the portfolios of two of its top executives -- and the moves hint that a spinoff of its self-driving business might be in the works.

GM president Dan Ammann is handing off responsibility for global product planning and the Cadillac brand to Mark Reuss, GM's global product-development and purchasing chief. The moves will allow Ammann to spend more time focused on subsidiary GM Cruise, which is developing a self-driving taxi service.

The changes are effective immediately, GM said in an internal announcement on Wednesday.

It's possible this is nothing more than a routine shuffling of responsibilities between senior executives. It may also be intended to shift the overhaul of Cadillac, which has stalled somewhat, into higher gear.

It's also very possible that the shift is a move toward something bigger: A full or partial spinoff of GM Cruise from the "legacy" automaking company. 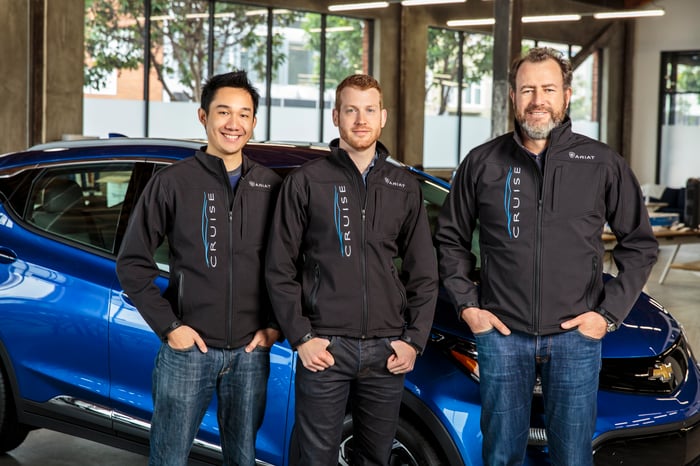 Over the last several quarters, GM has emerged as a leader in the race to deploy self-driving vehicles on public roads. Ammann has had a lot to do with that: He led the effort to acquire San-Francisco-based start-up Cruise Automation back in 2016 and has overseen its growth and transformation into an important GM subsidiary.

GM Cruise, as it's now called, has developed a self-driving taxi based on the electric Chevrolet Bolt EV. It expects to deploy "thousands" of self-driving Bolts in urban ride-hailing service starting next year, a potentially groundbreaking (and potentially very profitable) business.

Hints that GM might spin off Cruise, or at least give it a separate "tracking" stock listing, began swirling after Softbank Group's (SFTBF 5.00%) widely watched Vision Fund agreed last month to invest $2.25 billion in GM Cruise in two tranches.

Once complete, the Vision Fund will have a 19.6% stake in the GM subsidiary -- and while both GM and Softbank have agreed to wait seven years before seeking exits, the deal raised the possibility that GM might give Cruise a separate stock listing in order to realize a better valuation.

It's possible the move to shift some of Ammann's non-Cruise responsibilities to Reuss is a hint that Ammann is preparing to lead the spun-off Cruise organization.

Another possibility here, one that doesn't exclude the idea of a Cruise spinoff, is that GM's board of directors thought handing off Cadillac to Reuss might jump-start the stalled overhaul of GM's luxury brand. 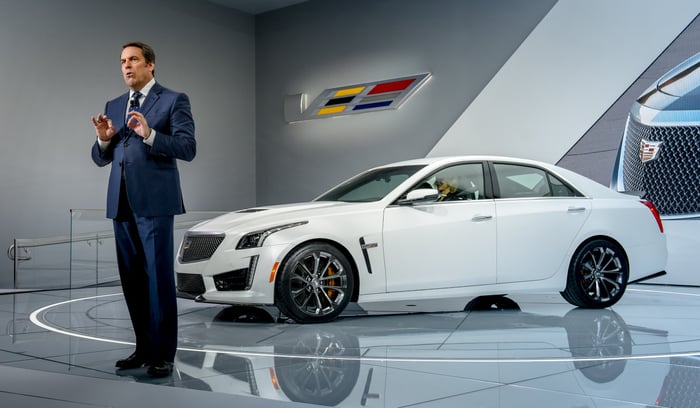 GM has been working for several years to overhaul Cadillac with new products and a new brand image that would make it a direct competitor to German luxury brands like BMW and Mercedes-Benz. The company brought in former Audi executive Johan de Nysschen to lead the transformation, but de Nysschen left GM earlier this year amid hints that members of GM's board (and importantly, some key U.S. Cadillac dealers) were unhappy with the pace of the revival.

While Cadillac's global sales rose 15.5% in 2017 on the strength of good demand in China, the brand's U.S. sales fell 8%. The problem: Luxury buyers are increasingly choosing crossover SUVs instead of sedans, but Cadillac's product overhaul had prioritized sedans, leaving it with just one crossover, the good-but-not-brilliant XT5, to sell last year.

That wasn't entirely de Nysschen's fault: He was, to some extent, at the mercy of GM's overall product development plan, for which Ammann has had responsibility. It's possible the board's decision to hand off Cadillac to Reuss is a signal that it wants to see upcoming Cadillac models prioritized.

GM is in the process of launching a second crossover for Cadillac, the one-size-down XT4, right now. A third, a three-row model that may be called the XT7, will be launched in the first half of 2018. Those two models, and several more that are set to follow over the next three years, should give the brand a boost. Reuss's job will be to see that those new Cadillacs are great products that compete well with those German rivals.

The upshot: Bullish possibilities in the tea leaves

My sense is that both of these things are probably true -- that GM's board wants Ammann focused on Cruise and Reuss's attention on the upcoming new Cadillacs. Both are important to investors: A Cruise listing could "unlock" a boost in GM's overall valuation, while the plan to boost Cadillac is a key part of CEO Mary Barra's effort to sustainably boost GM's operating margin over the next few years.

Long story short: These moves are probably bullish -- but it may be a while before we know exactly what GM is thinking, here.