Recent benchmarks at PCWorld supported that claim, with Executive Editor Gordon Mah Ung stating that the Kaby Lake G "stacks up nicely against the GeForce GTX 1050 in most games." Ung also declared that Kaby Lake G could "represent the future of the PC and deserves the fear it's generating among competitors." 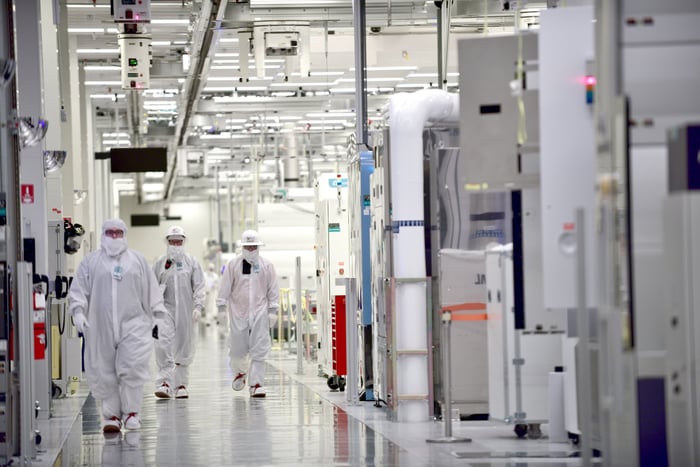 That's bad news for NVIDIA, since a CPU/GPU combo chipset generally requires less money, space, and power than a stand-alone CPU and GPU. It also offers much better performance than Intel's own integrated graphics solutions for its CPUs. This makes Kaby Lake G an appealing choice for laptop makers that want to reach a broader gaming audience.

Why Intel is gunning for NVIDIA

This sparked rumors that Intel would license its GPU technology from NVIDIA rival AMD. However, Intel subsequently partnered with AMD to integrate its Radeon graphics into its new laptop chipsets. It also created a new Core and Visual Computing Group, led by former Radeon chief Raja Koduri, to develop new first-party discrete GPUs.

Those moves tell us three things. First, Intel plans to develop its own GPU tech instead of licensing it from market leaders like NVIDIA and AMD. Second, Intel's introduction of first-party discrete GPUs could tighten its grip on the PC and data center markets and drive out disruptive challengers like NVIDIA. Lastly, Intel needs AMD to help it tread water as it develops its own discrete GPUs.

Should NVIDIA be worried?

NVIDIA's first line of defense against Intel is its GPP (GeForce Partner Program), which grants OEMs early access to new technologies and collaborations with its engineering team to produce gaming PCs. However, critics often claim that the GPP is an anti-competitive program that helps NVIDIA lock in OEMs. Only two major PC makers -- HP and Dell -- have launched Kaby Lake G laptops so far. HP's Spectre x360 15 arrived in March, and Dell's XPS 15 9575 started shipping in late April. But if HP's and Dell's laptops resonate with gamers, other OEMs could follow suit and step away from the GPP.

NVIDIA doesn't break down its gaming GPU sales, which accounted for 54% of its revenue last quarter, by desktops or notebooks. But during last quarter's conference call, CFO Collette Kress claimed that its sales of chips for gaming notebooks "grew well, driven by an increasing number of thin and light notebooks based on our Max-Q design."

However, that design still requires stand-alone CPUs -- which leaves it vulnerable to Kaby Lake G. That pain could worsen when Intel finally launches its own discrete GPUs, which could take a bite out of NVIDIA's desktop and data center GPU sales.

Intel is emerging as a threat to NVIDIA, but NVIDIA investors shouldn't panic yet. NVIDIA still controlled nearly two-thirds of the discrete GPU market during the first quarter, according to research firm JPR, making it the 800-pound gorilla of the graphics market.

However, investors should keep a close eye on Intel's partnership with AMD and the eventual arrival of its discrete GPUs. If Intel plays its cards right, it could throttle the growth of NVIDIA's core GPU market.