Alphabet (NASDAQ:GOOG) (NASDAQ:GOOGL), the parent company of online search king Google, has put a date to its second-quarter earnings release. Scheduled to report results on July 23, investors will look for the company to keep up its recent strong momentum.

Investors have good reason to have high expectations for Alphabet going into its second-quarter report. Not only has Alphabet's business been serving investors some impressive numbers, but its stock has been climbing nicely, too. Alphabet is up about 8% year to date, handily outperforming the S&P 500's 1.6% gain during the same period.

As investors prepare for Alphabet to report another quarter of results, here's a preview of what to expect in four important areas of the online advertising company's business. 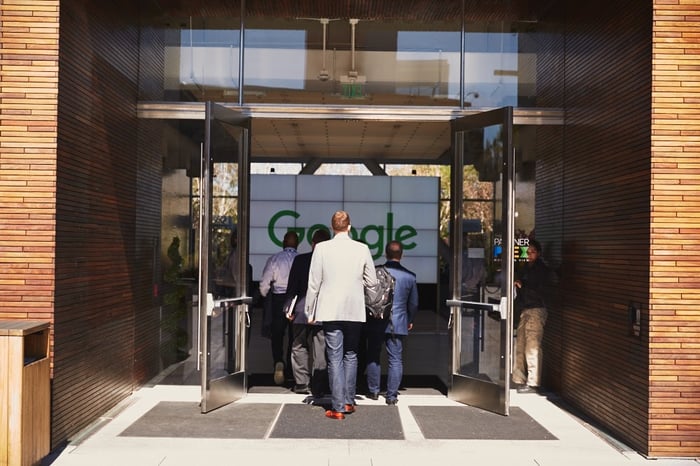 As Alphabet continues to grow in size, the company's revenue and earnings per share are subject to increasingly more scrutiny. Investors need to know the search giant can keep growing nicely even with a $786 billion market capitalization. In addition, the stock's premium valuation adds to the pressure. Alphabet trades at about 27 times next year's earnings estimates.

Alphabet's "Google other" segment, which primarily includes revenue from cloud, hardware, and the Android app store, has been growing in importance to Alphabet. The segment's revenue increased by $1.15 billion compared to the year-ago period -- up 36% year over year. This brought total first-quarter Google other revenue to $4.4 billion, accounting for 14% of Alphabet's total revenue.

Investors should look for similarly strong growth from this important catalyst in the second quarter.

Looking under the hood in Alphabet's Google other segment, investors should look for some updates on Alphabet's cloud business. In 2017, cloud became a $1 billion-plus business on a quarterly basis when measured by revenue, management said. But despite its already notable size, Alphabet management said in the company's first-quarter earnings call that the segment "saw increasing momentum" during the period.

We are growing across the board and are also signing significantly larger, more strategic deals for Cloud. Our security capabilities, the easy-to-use advanced data analytics and machine learning solutions, and the secure and industry-leading collaboration platform, G Suite, are winning customers over. Google Cloud is growing well.

Investors should look for management to reaffirm cloud's momentum.

Last but certainly not least, investors will want to look at Alphabet's advertising revenue trends. Given the heightened scrutiny on data privacy in the wake of Facebook's high-profile user data scandal, investors will want to see if this dampened advertising growth. Based on analysts' consensus estimate for Alphabet's revenue to increase 24% year over year, the market doesn't seem to expect any material negative impact. But for investors looking for some more context going into the quarter, Alphabet's first-quarter ad revenue was up 24% year over year. If there's a deceleration in this metric, investors should look for an explanation from management.

Overall, investors will want to look for Alphabet's underlying results to show a company firing on all cylinders. Given Alphabet's pricey valuation, investors should expect nothing less.