Shares of General Electric (NYSE:GE) stock are reacting positively to a Form 8-K filing with the SEC this morning. As GE explained in its filing, the company plans to "focus on Aviation, Power and Renewable Energy" and spin off both GE Healthcare and its Baker Hughes oil field services company. 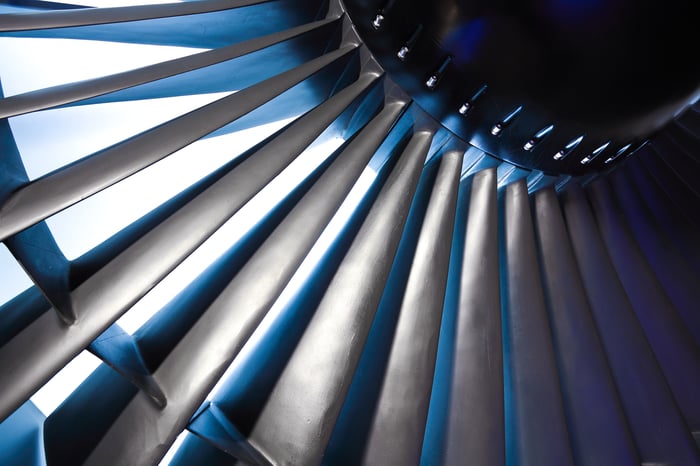 GE says that in "the future" it intends to be a "focused high-tech industrial company" concentrating on just three businesses, Aviation, Power, and Renewable Energy, which it says are both "highly complementary" and "poised for future growth," resulting in a "simpler, stronger GE."

It will also be a much smaller GE. Last quarter, the three business segments named produced $15.9 billion in revenue for GE, or only about 55% of the company's total revenue. This suggests that about 45% of GE is getting spun off.

With it will go a lot of debt. GE is targeting a $25 billion reduction in its debt load, (GE's long-term debt is pegged at $105 billion today, according to S&P Global Market Intelligence figures), and an "industrial" debt load equal to 2.5 times earnings before interest, taxes, depreciation, and amortization.

About 20% of GE Healthcare will be broken up and sold off piecemeal, generating cash that will help increase GE's cash holdings up to $15 billion. The 80% of the company's healthcare business that remains will be spun off to shareholders tax-free.

Baker Hughes, currently 62.5% owned by GE, will be "fully separated ... in an orderly manner over the next two to three years."

The fate of GE Capital isn't entirely spelled out, but it appears it may remain within GE as a "smaller and more focused" operation "supporting [GE's] core industrial businesses." Some of GE Capital may go by the board, though, as management says it plans to "materially shrink the balance sheet of GE Capital targeting sales of $25 billion in energy and industrial finance assets by 2020" and will also "reduce its insurance exposure."

Investors are obviously liking this plan a lot, and focusing their attention on the improvements to what will remain of GE. This suggests to me, though, that investors seeking a bargain may be better advised to rummage through the assets getting the fire-sale treatment from GE. When a seller's this motivated to dump stuff, that's probably where the best bargains will be found.