Cara Therapeutics Inc. (NASDAQ:CARA) stock soared 16.2% as of 11 a.m. EDT on Wednesday. Shares of the biotech were up as much as 35% earlier in the day.

The big catalyst for Cara was the company's announcement of positive top-line data from a phase 2/3 clinical study of an intravenous (IV) form of CR845. This study evaluated IV CR845 in alleviating post-operative pain for patients who underwent abdominal surgeries. 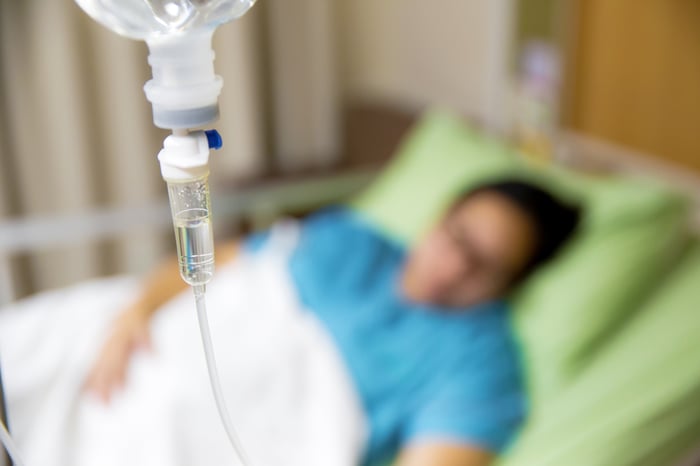 Pain relief wasn't the only area where IV CR845 helped patients. Cara said that the incidence of patient-reported vomiting for patients taking the 1.0 mcg/kg dose of IV CR845 was 73% lower than that of patients on placebo. Patients taking this dosage of the drug also had significant improvements in post-operative nausea and vomiting (PONV) impact scores.

Current opioid drugs used for pain relief after surgery can be addictive and cause nausea and vomiting. Based on the latest clinical study results, IV CR845 could have an advantage over these drugs. CR845 is a different kind of opioid known as a kappa opioid receptor agonist, which doesn't penetrate the blood-brain barrier and therefore doesn't have the negative side effects of commonly used mu opioid drugs.

The phase 2/3 results for IV CR845 presented a big step forward for Cara. An oral version of CR845 produced disappointing results last year in a phase 2b clinical study in reducing pain in patients with osteoarthritis of the knee or hip.

Cara Therapeutics CEO Derek Chalmers stated that the company "will be assessing all options, including discussions with regulators, as to how to best move this program forward." That might sound like a subdued response after such promising results for IV CR845, but there's a reason behind Chalmers' tone.

The biotech is putting a much greater emphasis on CR845 in treating pruritis (itching) associated with chronic kidney disease. Cara already has a brand name for the product, Korsuva. In May, the company inked an agreement with Vifor Fresenius Medical Care Renal Pharma to license most of the rights to the drug outside of the U.S.

Perhaps the most likely scenario for Cara will be to find a partner for IV CR845 in treating pain, while the company focuses on the pruritis indication. Investors will want to pay close attention to future results from Cara's pivotal phase 3 study of Korsuva that began in January 2018.