Air Transport Services Group (NASDAQ:ATSG) stock took off like the proverbial bat out of Hades last year, catching a big updraft after it signed a deal to lease 20 Boeing 767 transport aircraft to Amazon.com (NASDAQ:AMZN) to help the latter build its own air transport service. But then, ATSG hit an air pocket.

Over the past 52 weeks, Air Transport Services Group has seen the value of its stock fall 3% as the S&P 500 advanced 11%. But while that sounds like bad news, analysts at Stifel Nicolaus are arguing this morning that it actually gives investors a second bite at the apple and a chance to buy a stock with "long-term growth prospects" at a price 13% below its recent highs.

Is Stifel right about that? Let's find out. 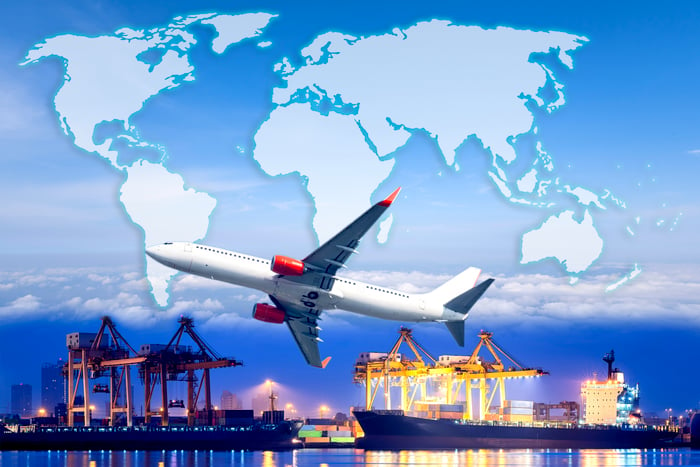 Let's start with a review of the news that sent ATSG stock up 60% last year. As my fellow Fool.com contributor Rich Duprey explained, Amazon.com has decided to create its own delivery service. Dubbed Shipping with Amazon, it's an extension of the company's Prime Air delivery service, and will compete with the likes of UPS and FedEx. To do that, Amazon needs airplanes to speed shipments across the country.

That's where Air Transport Services Group comes in. Last year, Amazon inked deals to lease 20 airplanes from ATSG (and 20 more from Atlas Air), which will operate out of an air cargo hub in Kentucky, and this expanded relationship is already making itself felt on the company's financials. In last quarter's earnings release, ATSG noted that Amazon "accounted for 28 percent ... of ATSG's first quarter 2018 consolidated revenues," making it one of ATSG's largest clients.

What Stifel says about this

Investors responded quickly (and positively) to Air Transport Services Group's news last year, but as Stifel explains today in a note covered by StreetInsider.com (subscription required), "[T]he stock ran too far too fast after putting up its (first) 20 planes for Amazon." ATSG's subsequent pullback, on the other hand, gives investors a chance to buy the stock after the initial rush has already passed.

"We continue to see renewed interest in air cargo, as supply chains speed up in response to the growth of e-commerce," argues Stifel. "ATSG is well positioned as one of the leaders in the acquisition, conversion, leasing, maintenance, and operations of freighters."

Amazon may now be one of the biggest parts of its business, but ATSG gets as much revenue from DHL (28% last quarter) and is also a big supplier to the U.S. military (11% of revenue). In total, ATSG was leasing out 52 freighters to "external customers" such as these at the end of last quarter.

Stifel says it finds ATSG shares "attractive" at current prices, "given the long-term growth prospects for the business -- with Amazon and outside of Amazon."

So Stifel likes the valuation at Air Transport Services Group -- but should you? I have to say that, as well as ATSG is doing today, and as well as it's expected to do in the future, I still can't see a lot of value in these shares at current prices myself.

Revenue may be growing nicely at ATSG -- up nearly 80% over the past five years, and up 39% last year alone. But ATSG profits declined in 2016 and again in 2017 (when the Amazon deal was announced). They're growing again right now, but with just $24.4 million in GAAP profit reported over the past 12 months (and negative free cash flow), the stock still looks extremely expensive to me at 52 times trailing earnings.

Meanwhile, as for growth, Stifel sees "long-term growth prospects for the business," and most analysts agree. Still, consensus targets for ATSG's earnings growth over the next five years hover around 15%, which seems to me too slow a growth rate to justify a P/E ratio in the 50s.

Long story short, I still think I'd rather be short this stock than long -- Stifel's endorsement today notwithstanding.