Stock in Carnival Corporation (NYSE:CCL) took a slight hit earlier this week when the cruise titan unveiled its fiscal second-quarter 2018 earnings. Shares retreated nearly 8% during the trading session following the June 25 report, as a revised outlook for fiscal 2018 earnings per share (EPS) resulted in a bout of consternation from shareholders.

To get a sense of Carnival's overall condition as of the first half of the year, let's delve into both the guidance revision and two other key points management communicated during the earnings conference call on Monday.

Our full-year guidance is now below March guidance in the range of $4.15 to $4.25. We continue to have strong operating performance. Despite the impact of fuel and currency, the midpoint of our original December guidance of $4.15 has become the floor for our current full-year guidance, reflecting continued strength in the business.

Carnival enjoyed record revenue of $4.4 billion during the quarter, and more impressively, booked net revenue yields (net revenue divided by total available passenger cruise days) of 4.8%, well above guidance for between 2.5% and 3.5%. Carnival also increased its expected full-year net revenue yield from 2.5% to 3% alongside second-quarter earnings.

And yet the company dialed back its full-year diluted adjusted EPS guidance, from a range stated in March of $4.20 to $4.40 to a new band of between $4.15 and $4.25. Management assigned two specific factors to the revision: rising fuel costs and a stronger U.S. dollar. Both have become more pertinent influences since the company's last outlook guidance in March. The company attributed an impact of $0.19 to the combination of fuel and currency.

It's worth observing that neither of these factors is within Carnival's control. If we back out the fuel and currency impacts, the company's outlook on operational factors which it can influence hasn't changed at all. In fact, this revision simply resets guidance very close to the original full-year guidance number, issued in December 2017, of between $4.00 and $4.30 -- but with a higher lower bound. 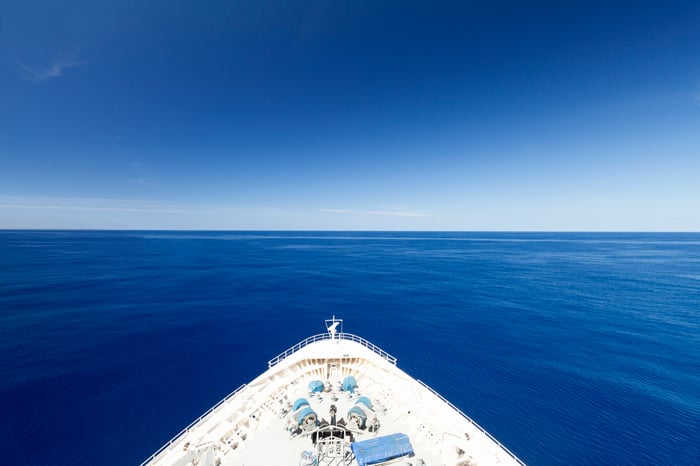 2. We believe it's unwise to hedge fuel costs or even to predict future direction

...[W]hen we do our guidance -- I think we've said this many times before -- we basically take the spot price of fuel today as we see it, and we use that price going forward through the balance of the year and in any forecast. We're not trying to make a projection for the fuel price. As Arnold [Donald] said, we don't know where it's going, but we try to use to use the current existing fuel price.

During the earnings call, analysts discussed rising fuel expense with management, and asked if the company would consider undertaking hedges on fuel (this is common in the airline industry, which also deals with fuel cost as a significant component of overall expense).

Management explained that the company has never employed fuel hedges, nor does Carnival think it's a bright idea for a cruise line to hedge against rising fuel costs. CEO Donald remarked that Carnival believed in maintaining its economic freedom, meaning that when a company purchases directional futures contracts on commodities, it's sacrificing profit if commodities drop instead of rise. Donald remarked that Carnival never tries to play "the fuel game," as "even oil companies don't know where the fuel prices are going."

CFO Bernstein's point quoted above runs along the same lines, with a subtle implication for earnings guidance. If Carnival had tried to project the price of fuel for the remainder of the year in March, it could have easily enough issued an outlook incorporating the price increases of the last three months -- if it had foreseen them. But this is just the type of fuel forecasting Carnival doesn't believe in or want to engage in.

Thus, the cruise line's guidance in any given quarter is based on the latest fuel pricing, and subject to change. As a shareholder, if you grasp this variability due to an external constraint, you might not share the herd's negative interpretation of Carnival's revision to its full-year EPS.

We don't have a problem right now in terms of looking ahead, with booking curves or yields or any of that. So, we know there's concern about capacity. There's actually not even any empirical evidence to show a correlation between capacity and yield; it doesn't exist. More importantly, we're here to grow earnings and further improve our return on investment capital. That's exactly what we've been doing, and it's what we're going to do.

Carnival expects to take delivery of 18 new ships between 2018 and 2023; with a current fleet total of 103 ships, this will represent a significant addition to passenger capacity. As Donald alluded to above, some investors fret that a wave of new ships that extends the company's available cruise days by a double-digit percentage may decrease net yields.

As he went on to argue, in the cruise industry, the theory that reasonable capacity addition diminishes yields hasn't been proven in practice. As a whole, the cruise market is capacity-constrained -- Donald pointed out in his discussion with analysts that the industry holds less than a 2% share of all hotels worldwide. Multiple cruise-industry trends should bear out Carnival's vigorous capital investments in "newbuilds" over the next few years. (For those who are interested, I enumerated these in an article last year on cruise-company dividend stocks.)

Rather than focus on the number of vessels added to its global mix, Carnival wants its shareholders to appreciate return on invested capital (ROIC) on the entire fleet. Currently at 8.5%, Carnival's ROIC has been trending toward a respectable double-digit reading for the last few years; it's a sign that the company has managed its capital resources wisely up to this point, and will likely continue to do so.