However, Qualcomm's Snapdragon 835 Mobile PC platform, its first big push into the market, fell short of expectations. The Snapdragon PCs couldn't match the horsepower of their Intel-powered counterparts, and many older x86 apps didn't run properly -- despite Microsoft's and Qualcomm's emulation efforts. 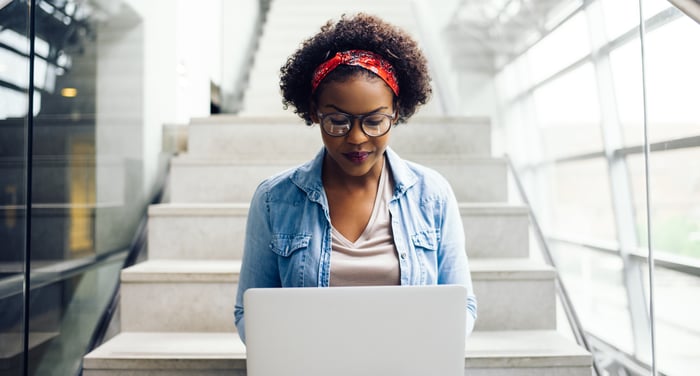 So in early June, Qualcomm announced the new Snapdragon 850 Mobile Compute Platform, which will provide a 30% performance boost, a 20% jump in battery life, and a 20% increase in 4G LTE speeds. Shortly afterward, website WinFuture reported that Qualcomm was already developing a follow-up to the Snapdragon 850, tentatively called the Snapdragon 1000, exclusively for Windows 10 PCs. The Snapdragon 835 and 850 platforms are both based on smartphone SoCs.

The Snapdragon 850 and 1000 platforms indicate that Qualcomm is doubling down on its efforts to break Intel and AMD's (NASDAQ: AMD) duopoly in the PC market. I think several major headwinds could derail Qualcomm's efforts.

The shadow of Windows RT

Yet Windows RT flopped since the OS couldn't run many older Windows apps designed for x86 processors. Microsoft tried to address the flaw by offering "universal" apps through its Windows Store, but many developers shunned the platform. Meanwhile, consumers who didn't understand the differences between Windows RT and Windows 8 were frustrated when they couldn't run their older software.

Microsoft and its OEM partners stopped selling Windows RT devices about a year after the OS' launch in late 2012. Microsoft and Qualcomm believe that faster processors and better x86 emulation technology will make ARM-powered Windows 10 a mainstream reality this time, but the mixed reviews indicate that there's still plenty of work to be done.

The Windows RT debacle burned Microsoft's OEMs, and many of those RT partners aren't lining up to launch ARM-powered Windows 10 PCs. Instead, Microsoft and Qualcomm's top allies this time around are HP (NYSE: HPQ), Asus, and Lenovo.

HP is the top PC maker in the world, but its move into ARM-based PCs is clearly a cautious one. HP announced its first Snapdragon-powered PC, the Envy x2, in late 2017. But before the device even hit the market, HP revealed that it would also launch an Intel-powered version in early 2018.

Meanwhile, other OEMs remain reluctant to stray too far from Intel, which still has a "best in breed" reputation in personal computing. That's why AMD, which made progress against Intel in desktops with its new Ryzen CPUs, still isn't gaining market share in laptops.

Susquehanna analyst Christopher Roland recently claimed that AMD's share of the notebook CPU market hit a "new low" of 3.2% during the second quarter. If even AMD, which makes x86 chips, is having so much trouble against Intel in notebooks, it's unlikely that Qualcomm's ARM chips will fare much better.

The 20-hour battery life of Qualcomm's Snapdragon 835 devices sounds impressive, but many Intel-powered devices are catching up. Lenovo's ThinkPad T470 lasts over 16 hours, according to Laptop Mag, while Dell's XPS 13 9360 lasts more than 15 hours.

The recent reports about the Snapdragon 1000 indicate that the chipset will merely offer performance comparable to that of a U-series Intel Skylake from last year. But when we factor in the added stress of software emulation, it's likely that Qualcomm-powered PCs will continue to underperform Intel-powered ones for the foreseeable future.

Lastly, Qualcomm-powered PCs still aren't competitively priced. The Snapdragon-powered Envy x2 currently is listed at $800 on one major online shopping site, which makes it pricier than most low-end and mid-range Windows laptops and 2-in-1 devices.

Qualcomm is already struggling to challenge Intel in the server market, and it faces a tough uphill battle in laptops. Microsoft's support is encouraging, but it remains unclear if Qualcomm can convince OEMs and consumers to give ARM-powered Windows PCs a chance.