MongoDB (NASDAQ:MDB), fresh off its IPO last October, is a leading provider of a new kind of database called "NoSQL." The traditional row-and-column database, or "SQL" database, was appropriate for most enterprise use cases when it was invented 40 years ago. However, in today's world of social media posts and other kinds of unstructured data, the data management industry is a whole different beast.

NoSQL databases are much more flexible and scalable, storing data in "documents" and graph-based formats rather than the more rigid row-and-column format. While the difference can get technical, the NoSQL architecture enables vast amounts of data to be stored, analyzed, processed, and delivered rapidly -- a much more appropriate setup for today's enterprise applications.

MongoDB was an early leader in NoSQL databases, and recent events seem to indicate it might just be catching on as a leading provider with large enterprises. In fact, MongoDB's stock has already more than doubled from its October IPO price of $24.

I admit it -- I missed the boat. But rather than kick myself for missing out on the initial surge, I decided to defy my inner value investor and buy some shares recently, even near these all-time highs. 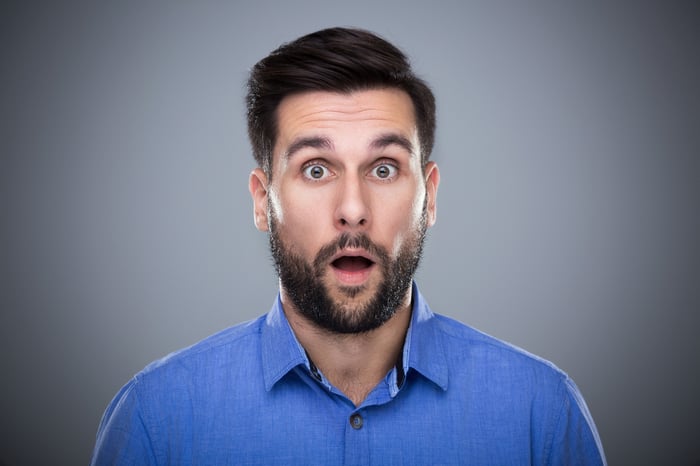 Unsurprisingly, MongoDB's strong recent earnings report had something to do with my decision to invest. The company grew overall revenue 49%, with even higher 53% growth in core subscription revenue. In fact, MongoDB has consistently beat analysts' revenue expectations all three quarters since going public.

Even more impressive, the company's customer count soared 83%, and customers who spend at least $100,000 annually grew 47%. MongoDB also reported growth across not only its new Atlas database-as-a-service offering, but even its older full-service Enterprise Advanced platform for on-premise use.

While 53% growth is impressive, MongoDB might only be scratching the surface of its potential. That's because the company seems to have reassured larger enterprises that they can now move critical workloads to its database, not just small and/or experimental projects.

That's no small task. Databases contain a company's most critical resource -- its data -- and thus need to be secured and provisioned by a trusted partner. Executives are uber-conservative when it comes to switching from the "trusted" relational database dominated by Oracle (NYSE:ORCL) to a new technology, even if that technology may offer exciting benefits. For instance, it took a while for large enterprises to embrace cloud computing, but now even the largest global companies are migrating to the cloud en masse.

Earning the trust of giants

However, MongoDB seems to have achieved a few technical milestones that have made C-suite executives more comfortable with NoSQL. First, MongoDB went public in October, and merely being a public company, rather than a "start-up," likely put some large customers at ease.

Second, MongoDB was able to achieve "ACID" compliance on its new 4.0 database. ACID compliance is a standard that links specific data types, and is used in many retail transactions -- like connecting a sale in-store directly to warehouse inventory. While ACID isn't necessary for most use cases, this achievement apparently eased one of the remaining doubts about MongoDB's feature set.

Third, MongoDB's database also has aggregation capabilities. Aggregation is essentially the ability to do analytics processing inside a database. It's a feature of traditional relational databases, but not traditionally in NoSQL databases. Thus, the ability to aggregate in a NoSQL database seems to have put MongoDB ahead of any start-up competition.

The scope and frequency of these senior-level conversations are far different than the types of conversations we had even 18 months ago. Previously, there were typically exploratory conversations to learn more about the company and the technology and what projects they could start with MongoDB. Now these conversations are focused on how to use MongoDB for some of the most important digital initiatives that their businesses are undertaking.

Finally, perhaps nothing screams "enterprise acceptance" louder than a partnership with IBM (NYSE:IBM). MongoDB recently announced this new partnership, which incentivizes IBM's global sales reps to sell MongoDB in IBM's private cloud offering. This vote of confidence could accelerate MongoDB's global growth beyond what it could achieve by itself.

The current database market is huge. Research firm Gartner projects the global database market to grow to $61.3 billion in 2020. Since MongoDB is only projecting $217 million to $220 million in revenue this year, that's quite a big opportunity. In fact, CFO Michael Gordon added, "Even among our largest customers today, we believe MongoDB represents a small fraction of their total database spend."

Not looking in the rearview mirror

I've been following MongoDB since its IPO, and I'm kicking myself for not buying sooner. But with a still-small market capitalization of only $2.9 billion, there's no point looking in the rearview mirror -- I'm (finally) a happy shareholder.