Along with legacy carriers and low-cost carriers (LCCs), regional Latin American airline Copa Holdings, S.A. (NYSE:CPA) has been buffeted by the rise in jet fuel over the last 18 months. After falling from nearly $3 per gallon all the way to $1 per gallon during 2014 and 2015 (and helping to generate record airline profits), jet fuel shifted course in early 2016, and market pricing has doubled over the last 30 months: Copa Airlines may be singularly equipped to deal with the adverse effects of a spike in its biggest annual expense item. The Panama-headquartered carrier focuses primarily on flights within Central America, South America, and Mexico.

Collectively, Latin America's economy has improved tangibly as of late: Most of the major countries in the region have registered at least four consecutive quarters of improving gross domestic product (GDP). Elevated economic activity is ratcheting up travel demand in both the business and leisure sectors. (I've written about this phenomenon recently in more detail in an article on Mexican airport operator Grupo Aeroportuario del Pacifico.) 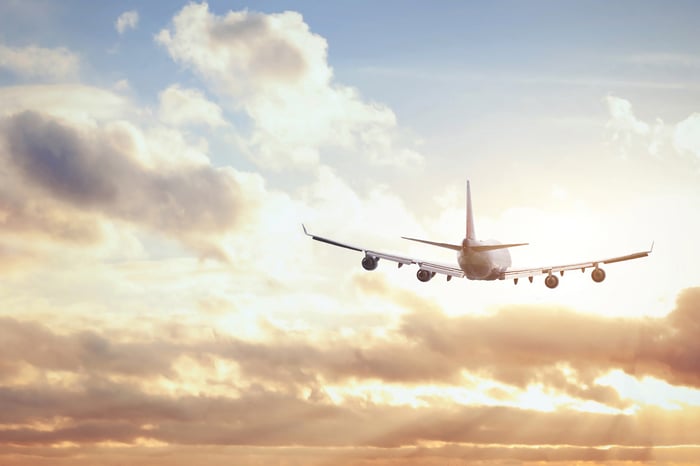 What's the net result of the stream of related statistics I've outlined above? High passenger demand is improving loads, yields, and revenue, thus offsetting the cost-per-mile increases wrought by climbing fuel costs. Copa was able to demonstrate a profitability increase during the first quarter, as operating margin improved 1.2 percentage points, to 20%.

While a hub-and-spoke setup isn't typically as lean as point-to-point flights offered by LCCs, in Copa's case, the configuration keeps costs low. Panama City is strategically located on the isthmus connecting Central America with South America. This makes it an ideal location to efficiently service flights between the two regions, not to mention Mexico to the west, the U.S. to the north, and the Caribbean to the east.

To be specific, Copa's CASM is one of the lowest in the airline industry -- more in line with LCCs than legacy network carriers. First-quarter CASM of $0.091, for example, compares favorably to low-cost leader Spirit Airlines (NYSE:SAVE), which booked CASM of $0.0884 in the first quarter of 2018. Incidentally, Copa owns an incipient LCC brand, Wingo, which it launched in late 2016 to take over most of its Columbia flights. Wingo currently accounts for 2% of total company revenue.

At least one more advantage is native to Copa's geographical focus. During the first-quarter earnings conference call, CEO Pedro Heilbron observed that higher fuel generates an offset in Latin American economies, as the currencies of oil exporters like Brazil and Argentina tend to firm up in concert with oil prices. Stronger local currencies positively affect Copa's yields. This has occurred only to a modest degree in the current cycle, although presumably, a sustained oil price increase will begin to bolster Latin American currencies.

Finally, as a relatively small regional carrier, Copa can more easily adjust capacity versus larger rivals in order to lift yields and absorb higher fuel expense. When asked about the carrier's willingness to do so, if needed, Heilbron was quick to cite prior instances in which Copa had trimmed capacity. Yet he also noted that the process of winnowing seats and/or flights isn't a magic bullet for neutralizing short-term fuel spikes.

Is Copa right for your portfolio?

In sum, a strategic focus within a high-demand region, an efficient network configuration, a low-cost structure, the potential benefit from rising Latin American currencies, and flexibility within capacity constraints all contribute to Copa's ability to weather oil inflation more capably than many of its industry peers.

These advantages aren't without risk. In the second quarter of 2018, the company expects to record a one-time charge of $15 million due to a temporary suspension of flights (now resumed) in Latin America's worst-performing economy -- Venezuela. But despite such occasional challenges, Copa may prove a viable long-term investment for airline investors fretting over the seemingly inexorable, upward creep of jet fuel prices.

Can This Airline Weather Higher Fuel Prices Better Than Its Competitors? @themotleyfool #stocks $CPA $SAVE Next Article
Current