The last thing Harley-Davidson (NYSE:HOG) needs are policies that will increase the cost of its already-expensive motorcycles, but President Trump's decision to impose tariffs on foreign aluminum and steel is having just that effect.

As promised, the European Union is slapping retaliatory tariffs on Harley motorcycles, as well as other products including bourbon, peanut butter, and orange juice. The only winners in such trade disputes are industries that use protectionism to limit competition. The burden always seems to fall on ancillary industries and businesses. This time, Harley is one of the victims. 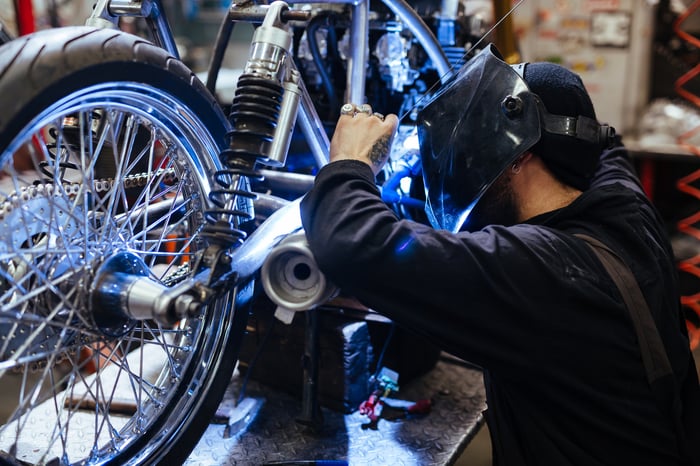 The motorcycle king is in a spin. Sales in the U.S. (its largest market) are diving, so it is trying to raise international sales to the same level as domestic sales. And though sales overseas rose only 0.2% in the first quarter, that was decidedly better than the 12% decline in the U.S.

Europe is Harley's second-largest market behind the U.S., with almost 40,000 motorcycles sold there last year: about the same amount as in 2016. Tariffs that make its bikes more expensive won't make them an easier sell. So to compensate, Harley-Davidson is moving some production for the European market out of the U.S.

In a Securities and Exchange Commission filing last week, the bike maker said that with tariffs on its motorcycles jumping from 6% to 31%, the cost of each motorcycle it exported to the EU would rise by about $2,200, a price increase that, if actually imposed, would crush sales. So Harley said it won't be raising its prices, but instead will bear the cost of the tariffs, which will cost it $30 million to $45 million this year, or an annualized $90 million to $100 million.

As a result, Harley-Davidson will begin shifting production for the EU market to its international facilities. The company currently has plants in Brazil, India, and Australia, and it will soon open a new assembly plant in Thailand. Harley says the shift could take at least nine to 18 months to complete. It didn't detail what impact, if any, this would have on American jobs.

The irony is that Harley pushed for tariffs against imported motorcycles in the 1980s when it was trying to save itself from years of mismanagement. Now, it's being hoisted by its own petard.

Shares of Harley-Davidson, which were already depressed, fell sharply on the news of the latest production shift and are down 18% for the year compared to a 2% gain for the S&P 500. There are still more hurdles ahead for the motorcycle maker.

Because of the poor optics of the iconic manufacturer moving production overseas, Trump threatened the company with onerous taxes, tweeting:

A Harley-Davidson should never be built in another country! ... If they move, watch, it will be the beginning of the end - they surrendered, they quit! The Aura will be gone and they will be taxed like never before!

Harley-Davidson is in a difficult position. Sales are falling, and it has had to cut jobs and consolidate production. And it now faces dramatically higher costs due to factors beyond its control.

The bike maker does have the benefit of being able to sidestep the EU tariffs -- eventually -- because it is a global company and can shift production elsewhere. However, because Trump has raised the cost of aluminum and steel, it is still caught in a bind: If it raises prices at home to compensate for the higher raw materials costs, it might experience even fewer sales; if it absorbs the costs as it's doing for the tariffs in Europe, it will hit profits.

Harley-Davidson's problems are only noteworthy because it is a high-profile company. The impact on smaller businesses could be as large or even greater. There are few winners in trade wars and such battles leave a lot of collateral damage on all sides.