If you expected 2018 to be a busy year for biotech mergers and acquisitions activity, you were right. There have already been several huge deals -- and the year is only halfway over. But which have been the best acquisitions?

There's room for debate, of course. But in my view, three deals especially stand out. Here's why I rank Celgene's (NASDAQ:CELG) buyout of Juno Therapeutics, Novartis' (NYSE:NVS) acquisition of AveXis, and Roche's (OTC:RHHBY) purchase of Foundation Medicine (NASDAQ:FMI) as the best biotech acquisitions of 2018 (so far). 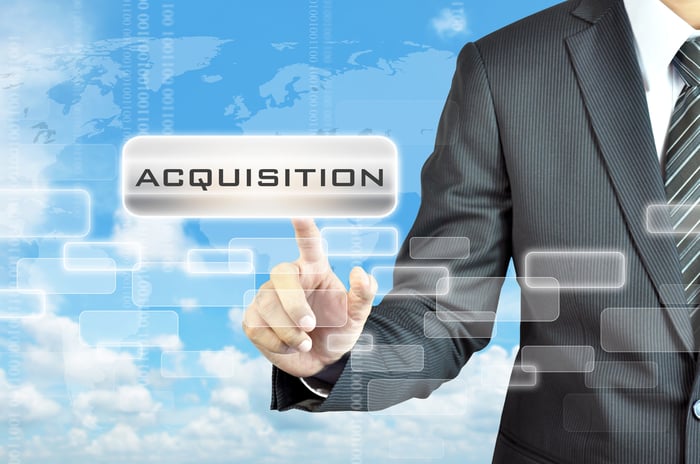 After its stock got hammered in 2017, many investors were hoping that Celgene would make a deal in 2018. The big biotech actually made two of them. On Jan. 7, Celgene announced that it was buying Impact Biomedicines for $1.1 billion up front plus up to $1.25 billion in contingent milestone payments. But another shoe dropped on Jan. 22 with news that Celgene was also acquiring Juno Therapeutics for $9 billion.

I thought then -- and still believe -- that buying Juno was a smart move for Celgene. The company already paid around $1 billion in 2015 for a 9.7% stake in Juno. Locking up worldwide marketing rights for Juno's lead candidate, liso-cel (also known as JCAR017), was a shrewd move, in my view.

Wall Street analysts project that liso-cel could generate peak annual sales of around $3 billion. That's right in line with Celgene's expectations as well. If these estimates are achieved, Celgene should easily recover its initial investment.

The Juno deal also immediately positioned Celgene as one of the leaders in a hot area of cancer treatment -- chimeric antigen receptor T cell (CAR-T) therapy. With its solid efficacy and safety results so far, liso-cel could become a best-in-class CAR-T therapy.

Novartis has known for a while that it faces sales erosion for leukemia drug Gleevec and multiple sclerosis drug Gilenya. The Swiss drugmaker made what I consider to be a great strategic deal in April with its $8.7 billion buyout of AveXis.

I like this transaction for three primary reasons. First, it's a fantastic fit. Novartis is already a leader in the neuroscience market thanks to its success with Gilenya. The AveXis deal brings promising spinal muscular atrophy (SMA) treatment AVXS-101 into its pipeline.

Second, I think AveXis' expertise in gene therapy could bring more to the table for Novartis than meets the eye. Gene therapy, which involves the insertion of a healthy gene into cells to modify DNA, holds potential in treating genetic diseases as well as in engineering T cells for CAR-T therapies. Novartis could look to the AveXis team to help further its research in both areas.

Third, the price tag for the deal wasn't bad. Analysts project that AVXS-101 could reach peak annual sales in the ballpark of $2.5 billion. Novartis only paid 3.5 times that peak sales estimate and received a late-stage candidate that could be launched next year.

Foundation Medicine isn't a biotech. It's a molecular diagnostics company. But Roche is a biotech -- a really big one. And Roche's announcement a few weeks ago that it was acquiring Foundation Medicine in a deal that valued the smaller company at $5.3 billion made a lot of sense.

Best bang for the buck

In my opinion, the award for best bang for the buck goes to Celgene. The company paid more for Juno than Novartis did for AveXis or Roche shelled out for Foundation Medicine. However, I think that over the long run the Juno acquisition will be more significant to Celgene than the other two deals will be for Novartis and Roche.

Celgene is scrambling to reduce its dependence on blood cancer drug Revlimid. I think the biotech is doing a pretty good job achieving that goal, but a delay in winning approval for multiple sclerosis drug ozanimod and a late-stage failure for Crohn's disease drug GED-0301 hurt. Gaining full rights to liso-cel, on the other hand, helps and should pay off for Celgene.

Its reliance on Revlimid and bets placed on its pipeline make Celgene perhaps the riskiest big biotech stock on the market. However, I think the stock is a risk worth taking, especially with its buyout of Juno.