Please ensure Javascript is enabled for purposes of website accessibility
Log In Help Join The Motley Fool
Free Article Join Over 1 Million Premium Members And Get More In-Depth Stock Guidance and Research
By Keith Noonan, Travis Hoium, and Matthew DiLallo - Jul 8, 2018 at 6:31AM

A panel of Motley Fool investors weighs in on whether you should follow some of Wall Street's top minds in buying Sempra Energy, General Motors, and GameStop.

Following the moves of successful Wall Street investors won't guarantee that you beat the market. But it's not a bad idea to keep an eye on what some of the investing world's most accomplished players are up to.

With that in mind, we asked three Motley Fool investors to weigh in on some stocks that have recently been purchased by big names on Wall Street. Read on to see whether they agree that Sempra Energy (SRE -0.59%), General Motors (GM -1.59%), and GameStop (GME -1.22%) are smart buys.

Looking to replicate their success

Matt DiLallo (Sempra Energy): Elliott Management and Bluescape Resources recently teamed up to take a 4.9% stake in utility Sempra Energy. Elliott has been around since 1977 and currently has $35 billion in assets under management and a strong track record of investing in the utility sector. Meanwhile, Bluescape started up in 2007 to invest in the energy sector. Its founder is the former CEO of utility TXU, which was the fifth-best-performing company in the S&P 500 during his tenure.

The two investors are taking an active role. They recently released a letter and presentation detailing their analysis of the company, which shows that the stock trades at a significant discount to its peers. They believe the issue is that the company owns a large portfolio of businesses that don't fit together. Because of that, they think the company should conduct a thorough strategic review, which will likely lead to the sale and spinoff of several businesses. These transactions have the potential to unlock $11 billion to $16 billion in value for investors, according to their findings, which could boost the value of the stock to between $139 and $158 per share.

Elliott and Bluescape have had success working together to unlock value at utilities in the past. They created $6 billion in value at NRG by selling non-core assets, while shares of FirstEnergy are up double digits since they stepped in to help improve its portfolio and balance sheet. That bodes well for their ability to unlock value at Sempra Energy, which is why investors should at least take a closer look at this stock. There's a good chance for a repeat performance.

An automaker built to last

Travis Hoium (General Motors): David Einhorn was one of the hedge fund stars coming out of the financial crisis. Despite some missteps since then, he's still one of the biggest names on Wall Street. That's why it's notable that as of his most recent 13F disclosure to the Securities and Exchange Commission, his biggest holding is General Motors. His fund, Greenlight Capital, owns $822 million of GM stock, over 1% of the auto giant, and he thinks there's a lot of upside ahead.

The main reason Einhorn likes General Motors is that it makes money. Unlike Tesla, the hottest automaker on the market, GM has real cash flow and generates a net income (outside of $7.3 billion of adjustments from the tax law at the end of 2017 and a $6.2 billion loss from an asset sale). 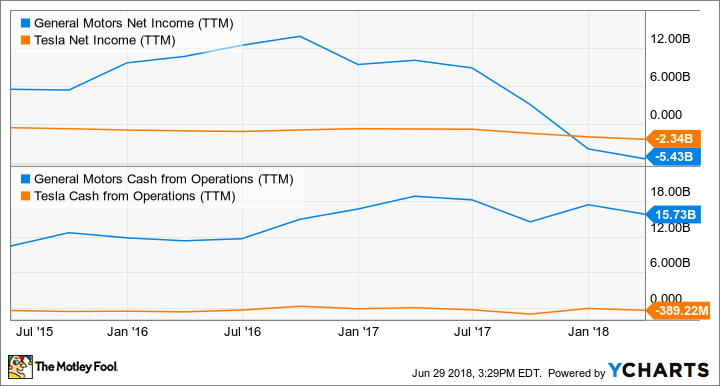 Being profitable in the auto business is harder than it seems. And over time, it's the ability to generate manufacturing profits that Einhorn ultimately thinks will make the stock a winner. I tend to think that's right, compared to companies that are burning through hundreds of millions in cash with little chance to turn a profit in the foreseeable future.

A retailer heading toward "game over"?

Keith Noonan (GameStop):  Ray Dalio's Bridgewater Associates bought 167 million shares of GameStop in the first quarter of 2018 -- bringing the fund's position in the company to roughly 3% of his total portfolio.  With shares still trading at just 4.5 times this year's expected earnings, five times expected free cash flow (FCF), and less than a fifth of projected sales, it's not hard to see what piqued the famous value investor's interest in the company.

Lending some credence to Dalio's value play, the video game retailer's share price has since climbed on news that management is looking at selling the company. However, even with the recent pop, GameStop shares have lost more than 60% of their value over the last five years, and offer a dividend yield of roughly 10.2%. The company still has big hurdles to overcome, though, and reports of a potential sale could complicate the stock's appeal as an income investment.

The rise of digital distribution has been eating into the sale of new and used games, which forms the backbone of GameStop's business. Forays into internal game development have been mostly unsuccessful. Further dampening turnaround hopes, the company took a $390 million write-off on its tech-brands segment last year -- owing to a slowdown for mobile hardware sales and changes to partner AT&T's compensation structure. The write-off was presumably a one-time event, but the conditions that prompted it could linger or worsen.

I've previously recommended GameStop as a potential value play for risk-tolerant investors seeking big dividend payouts. The cost of covering its dividend comes in at less than half of last year's adjusted FCF. Of course, it's important to note that FCF fell roughly 19% year over year in 2017.

Based on its cash flow and the value of its assets, it's fair to say that GameStop looks undervalued along certain metrics. The flip side to this is that the company might not be around to pay its dividend, and overall trends for the business are not favorable. I still think GameStop has appeal for some investors, but that category has narrowed with news of a potential sale of the company.