Shares of Seaspan Corp (NYSE:ATCO) have been on fire in 2018, rocketing 50.8% through the end of June, according to data provided by S&P Global Market Intelligence. Several factors helped drive the rebound.

After rough sailing in 2017, Seaspan has found much smoother market conditions this year. Because of that, the company's financial results slowly started turning around in the first quarter thanks to higher charter rates for its ships and the acquisition of a boatload of new vessels toward the end of the quarter. That deal to buy out a joint venture partner will provide a significant boost to earnings in the coming quarters. 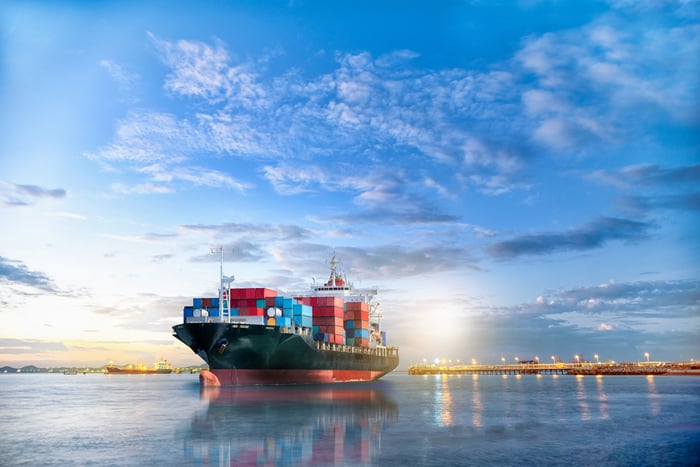 In addition to that, the company was able to shore up its balance sheet through a series of transactions with Fairfax Financial Holdings Limited (OTC:FRFHF). Overall, Fairfax Financial agreed to invest $1 billion into Seaspan over the next year. This cash infusion helped pave the way for Seaspan to buy out its joint venture partner and set the stage for the company to capitalize on additional acquisition opportunities while accelerating its progress toward achieving an investment-grade credit rating.

While shares of Seapan have run up this year, the stock is still down more than 40% over the last three years due to the lingering impacts of the shipping market downturn. Because of that, Seaspan could have more upside ahead as its acquisitions begin paying dividends and it captures higher rates for its ships as legacy contracts expire. However, investors need to weigh that upside potential with the possibility that rougher seas could re-emerge later this year if the trade war between the U.S. and China continues escalating. That uncertainty makes it a higher-risk stock that will likely remain highly volatile.