Tesla (NASDAQ:TSLA) has signed a deal to build a new car factory in China, according to multiple reports.

The Palo Alto-based maker of electric luxury cars has agreed to build what it's calling "Gigafactory 3," an assembly plant with annual capacity of 500,000 vehicles, on a site near Shanghai.

In an interesting twist, Tesla will apparently own the factory outright. If so, it becomes the first automaker to take advantage of a recent change in Chinese law that allows foreign automakers to build factories in China without a Chinese joint venture partner.

As you'd expect, Tesla's shares jumped on the news. But while investors do have some reason to be excited, there's one very, very big question hanging over the deal that Tesla has yet to answer. 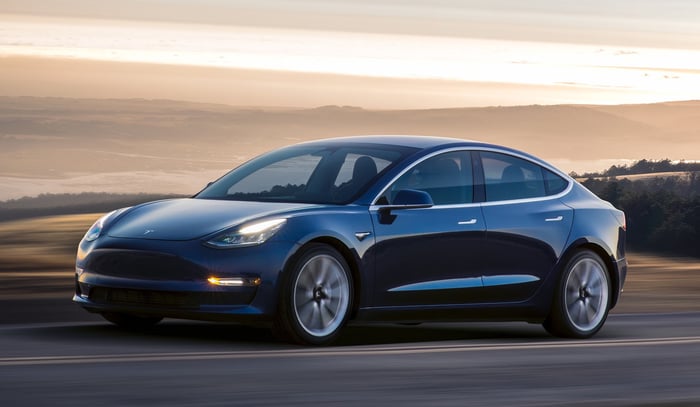 Tesla's ongoing effort to get the production line for its Model 3 sedan up to full speed has consumed much of its cash. Image source: Tesla, Inc.

Why there's a big question about Tesla's factory announcement

Citing sources in Shanghai's city government, the South China Morning Post reported that Tesla's new factory will represent the largest foreign investment ever made in the city, possibly even greater than the $5.5 billion that The Walt Disney Company spent to build the Shanghai Disney Resort.

Here's the thing: Tesla doesn't have that kind of money.

Tesla had $2.7 billion in cash as of the end of the first quarter. Given its all-out effort to get Model 3 production up to speed over the last few months, it's a safe bet that its cash balance at the end of the second quarter was considerably less than that $2.7 billion.

The company hasn't raised a cent since, even though it has a major debt repayment due later this year. Morgan Stanley analyst Adam Jonas, until recently an outspoken Tesla bull, has said that he thinks Tesla will have to raise $3 billion in the third quarter just to pay down debt and get the Model 3 fully up to speed.

But so far, it hasn't made any moves to raise money. In fact, CEO Elon Musk has said that he thinks the company won't have to raise money. That seems unrealistic given the recent state of Model 3 production and deliveries. That in turn has led skeptical investors to wonder if the real story is that something -- a credit-rating agency, key investment banks, the Securities and Exchange Commission -- is blocking Tesla from accessing the capital markets.

Adding to the intrigue, recent events have suggested that Tesla is becoming very concerned about running out of cash. It laid off 9% of its workforce last month -- and then cut prices on upscale versions of its new Model 3 sedan, suggesting that initial demand for the dual-motor Model 3s wasn't meeting its expectations.

The big question that Tesla needs to answer

Obviously, the big question is this: How is Tesla planning to pay for this more than $5 billion factory complex in Shanghai, given that it's running short of cash?

Is there another piece to this announcement coming soon -- a deep-pocketed Chinese investor, perhaps? Did Musk make the deal in hopes of using it to raise more cash, or is there some other explanation?

I'd caution against getting too excited about Tesla's new Chinese factory until we know how (or if) Tesla plans to pay for it.