Most investors don't associate electric vehicles or autonomous vehicles with mining, but the industry has quietly become one of the hottest areas of development of these technologies.

In fact, there are 416-ton self-driving haulers running around Rio Tinto's mines in Australia right now. Barrick Gold has semi-autonomous underground earth-haulers operating in Nevada and a dedicated software business unit that has partnered with Cisco Systems to make the technologies the standard operating procedure in the future of mining.

Others have joined the movement, including the $12 billion gold mining leader Goldcorp (NYSE:GG). The company recently deployed 40-ton electric mining vehicles at its Borden project, a development-stage underground mine at its Porcupine complex in Northern Canada. Production increases at Borden this year and next will prove integral to boosting production and lowering costs at Porcupine, which also includes the Hoyle Pond and Hollinger mines. Thanks to impressive cost savings achieved through the transition from haulers using diesel fuels, the all-electric strategy pioneered at Borden could prove integral to the company's broader portfolio, too. 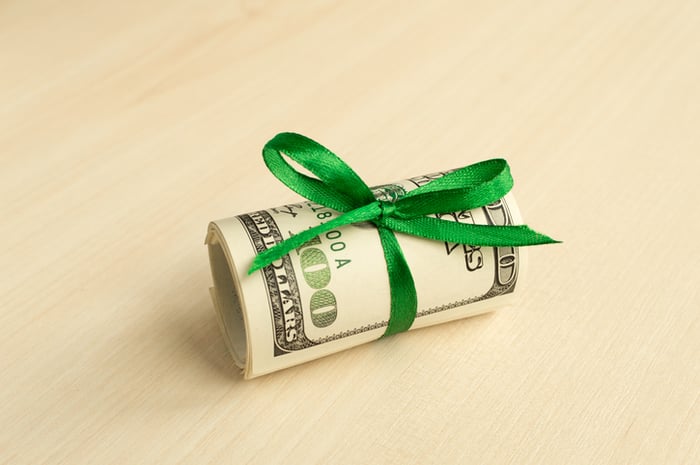 Borden isn't expected to enter commercial production until the second half of 2019, but once it ramps up in 2020, it'll be responsible for one-third of Porcupine's production. The mining complex churned out 272,000 ounces of gold in 2017, 10.5% of Goldcorp's total production last year. That shows how important the Borden project is, and explains the company's high expectations for it.

Goldcorp shareholders aren't just watching Borden's ramp-up for the expected production boost, but also because it'll become the first all-electric underground gold mine. While to the casual observer that might sound like an expensive PR campaign, it's anything but. According to Reuters, using electric vehicles at the mine instead of the standard diesel-powered ones is expected to save $9 million per year and provide even more value from potential productivity gains.

Underground mines have unique worker safety requirements compared to above-ground, open-air mines. For one thing, the exhaust from diesel-powered vehicles must be carried back to the surface in a labyrinth of ventilation ducts so workers don't suffocate. Building, operating, maintaining, and expanding ventilation systems adds a significant cost to underground mining operations. Additional costs include the diesel fuel itself and productivity losses resulting from idle time, since diesel engines cannot operate when gas from dynamite blasting is being evacuated from an underground mine. 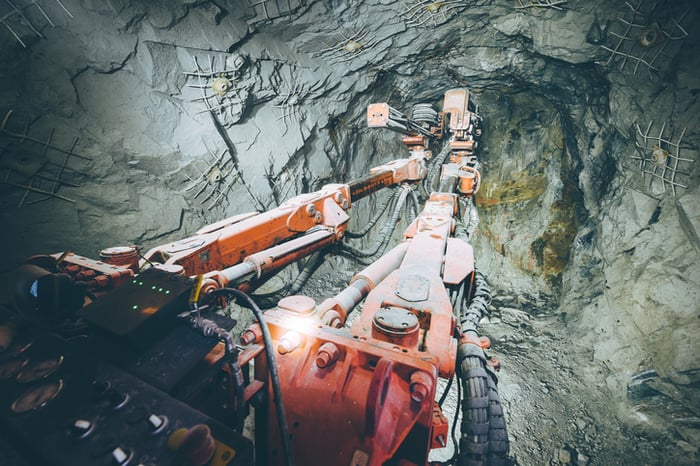 By contrast, exhaust-free electric vehicles will reduce expenses from ventilation systems, while sparing workers from the health risks of exhaust exposure and nosier vehicles. They're also easier to maintain thanks to having fewer parts. And electricity is a cheaper fuel than diesel. Over time that is expected to more than make up for the higher purchase price of the electric haulers, which are up to 30% more expensive than traditional haulers. There's also the issue of electric haulers needing to recharge before completing a full run, but fast-charging technology is being developed to hopefully alleviate that obstacle.

If the all-electric strategy works, then lower operating costs combined with higher output at Borden could help to lower production costs at Porcupine. In 2017, the mining complex ranked fifth out of seven Goldcorp mines in revenue generation and all-in sustaining costs (AISC). That included an AISC of $900 per gold equivalent ounce, compared to an average of just $824 per ounce of gold for all operations. Borden's success is crucial: The company is aiming to reduce its portfoliowide AISC to just $700 per ounce of gold in 2021, as part of its ambitious 20/20/20 growth strategy. But it could also pave the way for tremendous cost savings across the portfolio.

Introducing electric mining vehicles at all underground mines could prove lucrative in the long run, too. Consider that if Borden accounts for one-third of Porcupine's production in 2020, it will produce about 130,000 ounces of gold per year. If, as estimated, it saves $9 million annually from shunning diesel-powered vehicles, then it will realize savings of $70 per ounce. Approximately 60% of Goldcorp's production in 2017, or 1.54 million ounces of gold, originated in underground mines. Therefore, if the same cost savings per ounce of production could be achieved by switching those mines to an all-electric strategy, then the business could realize $108 million in annual cost savings. For perspective, it reported net income of $658 million in 2017.

Of course, that's a back-of-the-napkin calculation meant solely to illustrate the magnitude of the value that could be created, and it doesn't include the premium cost of buying the new vehicles in the first place, but I think it makes the point loud and clear: Goldcorp's pursuit of an all-electric mining strategy could be big for long-term investors.