Here's what you need to know about Broadcom's new deal. 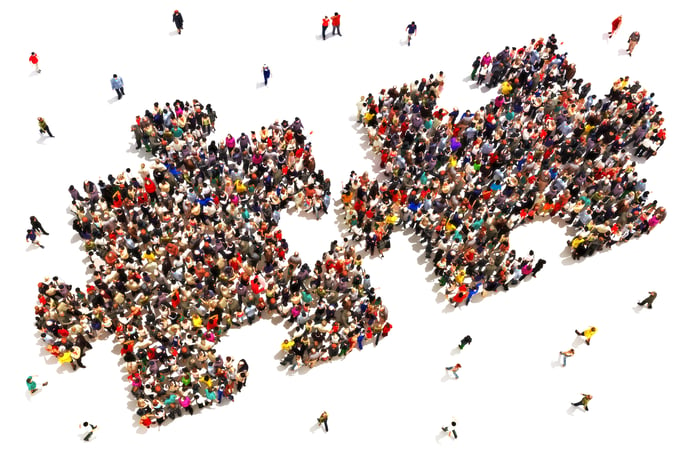 The CA acquisition will be funded by about $1 billion of cash from Broadcom's $8.2 billion reserves of cash equivalents plus $18 billion of new debt. When all is said and done, Broadcom's debt balance will have doubled. CA brings a cash balance of $3.4 billion to the table, along with $2.8 billion in long-term and short-term debts. That's essentially a wash, financially speaking -- for a large business like Broadcom, buying CA is like finding a few pennies and a pizza coupon in a wallet you bought from the local flea market.

Broadcom expects to keep its investment-grade credit rating thanks to strong cash flows and a stated ambition to pay down the loans quickly. For the record, Standard & Poor's recently reaffirmed Broadcom's BBB- corporate rating with a positive outlook for future changes. That's the lowest rung on the investment-grade ratings ladder, one step above the "speculative" ratings class that starts at BB+.

Over the last four quarters, Broadcom's free cash flows added up to $6.7 billion. Of that, $2.4 billion was funneled into dividend payments, leaving more than $4 billion free for activities like debt repayments or acquisitions. CA also sports positive cash flows these days to the tune of $1.2 billion in four quarters. Back out $428 million of dividend costs, and you get something like $700 million of annual free cash flows. The companies expect to unlock more cash profits over time as synergies and cost-cutting moves come into play.

Both companies have secured unanimous approval for this deal structure from their boards of directors. The deal still needs an affirmative vote from CA's shareholders plus antitrust approvals from the U.S., the European Union, and Japan. CA's largest shareholder, Switzerland-based investment firm Careal Property Group, has already committed its 25% CA ownership stake, lowering the voting bar by a lot.

Broadcom hopes to close the buyout in the fourth calendar quarter of 2018.

It's clear that Broadcom wants to expand its operations through buyouts. The company we call Broadcom today was formerly known as Avago Technologies, adopting Broadcom's better-known business name after acquiring that company in 2016. That was a $37 billion deal. Other components of this Franken-company include Emulex, LSI Corporation, and the lion's share of Brocade Communications Systems. Another day, another buyout -- that's just how Broadcom rolls.

The failed Qualcomm deal would have been a $119 billion monster, creating the third largest semiconductor company in the world. CA is a much smaller target, taking Broadcom in a new direction and dodging many regulatory roadblocks. It's Broadcom's first pure software play in a sea of semiconductor specialists, which also opens the door to some interesting cross-selling and co-development opportunities.

"This transaction represents an important building block as we create one of the world's leading infrastructure technology companies," said Broadcom CEO Hock Tan in a prepared statement, continuing:

With its sizable installed base of customers, CA is uniquely positioned across the growing and fragmented infrastructure software market, and its mainframe and enterprise software franchises will add to our portfolio of mission critical technology businesses.

Expanding Broadcom's customer base into new corners of the enterprise computing market makes plenty of sense, but the company needs to come up with a more detailed plot. It's easy to lose your way when exploring entirely new markets -- just ask chip giant Intel (NASDAQ:INTC) about the value it created with a $7 billion buyout in the data security sector. Spoiler alert: Intel punted on that business seven years later with little to show for its data security efforts.

Broadcom does not want to follow that example, starting from an even larger cash investment. That being said, the company has a history of delivering shareholder value from its hardware buyouts. The lessons learned from that sector should largely apply to a quasi-related software deal as well. Broadcom investors sure hope so, anyway -- the buyout binge has been kind to their portfolios: 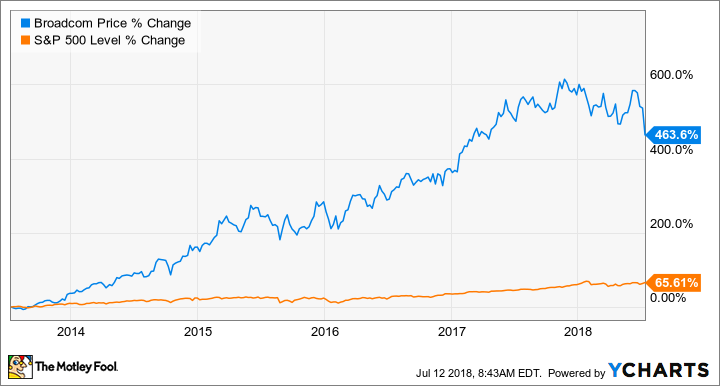