Beverage and snacking giant PepsiCo, Inc. (NASDAQ:PEP) issued its second-quarter 2018 earnings report on Tuesday, and it largely met the guidance management provided for investors in the first quarter. In an environment in which multinational consumer packaged goods (CPG) companies are struggling to expand, the ability to merely meet expectations is held in investor esteem -- shares rose roughly 5% in the trading session following PepsiCo's release. Let's review both the big-picture metrics and the details of PepsiCo's last three months. 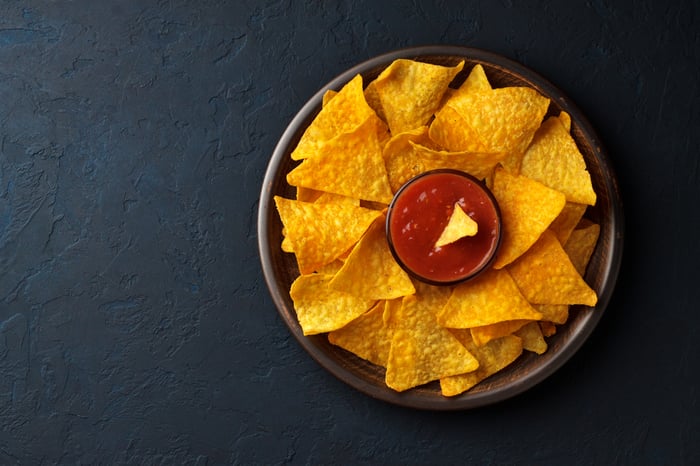 During PepsiCo's earnings conference call, CEO Indra Nooyi addressed the need to support the organization's trademark soda brands regardless of innovation within other categories, as soft drinks remain a critical part of PepsiCo's revenue puzzle. Nooyi reassured investors that the behemoth would remain competitive with Coke's flagship products on store shelves:

As we mentioned last quarter, we have stepped up media support on trademark Pepsi under the Pepsi generation's campaign. As a result, in the second quarter, we began to see improvement in a number of key brand health metrics that is leading to better net revenue performance as the year progresses. So, we intend to stay the course increasing investment behind brand support in the second half of the year with the aim of driving further top line improvement. At the same time, we remain laser focused on higher growth categories with appropriate brand investment and robust innovation. For example, bubly, a cleverly marketed new entrant in the fast-growing sparkling water segment launched earlier this year and it continues to perform exceedingly well.

Since PepsiCo achieved its organic revenue goal during the second quarter, it left full-year revenue guidance intact. Management reiterated its 2018 organic revenue growth rate target of 2.3%, and though it cautioned that commodity price increases might pressure margins in the back half of the year, PepsiCo is maintaining its "core," or adjusted, earnings-per-share benchmark of $5.70. If met, this result will represent a 9% increase over last year's earnings.