Investing in biotech stocks can be risky because clinical trial failures can lead to eye-popping drops in share prices. Nevertheless, the potential to benefit from revolutionary new medicines can make owning biotech stocks in a diversified portfolio smart. If you're hunting for new biotech stocks to buy, these three Motley Fool investors think you should consider Ligand Pharmaceuticals (NASDAQ:LGND), Viking Therapeutics (NASDAQ:VKTX), and Amarin Corporation (NASDAQ:AMRN). Each of these companies has catalysts that could make now a good time to pick up shares.

Brian Feroldi (Ligand Pharmaceuticals): One way that biotech investors can lower their risk profile is by only investing in companies that have already reached profitability. While these companies are few and far between, there are a handful of biotechs out there that have already achieved this important milestone.

Ligand Pharmaceuticals is one such business. The company has generated consistent profits since 2013 and looks poised to continue to do so for the foreseeable future.

Ligand has successfully crossed into the black because it has adopted a business model that is differentiated from most biotechnology companies. Ligand focuses its research dollars on developing technologies and products that help other drug companies discover and develop new compounds. The company then licenses its technology out to its partners and receives milestone payments along the way. Better yet, Ligand earns royalty payments when any of its partnered programs cross the finish line.

This unique approach to drug development is highly appealing for a few reasons. First, Ligand is easily able to spread its risk out over dozens of programs at the same time (the company's technology is currently being used in more than 165 programs). Second, the company doesn't have to deal with the hassle of running the clinical trials, seeking regulatory approval, or commercializing any successful compounds. Instead, Ligand gets to act as a cash-checking machine whenever its partners' programs progress or hit pay dirt.

Ligand's low-risk approach to drug development has worked out beautifully for investors over the long term: 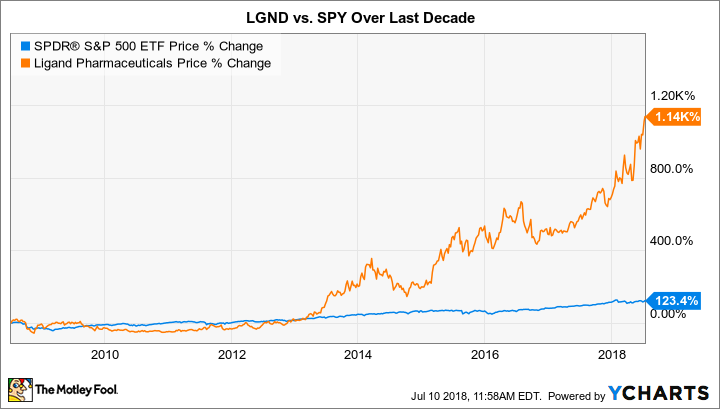 Moving forward, market watchers expect Ligand's profits to grow in excess of 31% annually over the next five years. While the stock isn't particularly cheap right now -- shares are trading hands for about 39 times next year's earnings estimates -- I still think that right now is a fine time for biotech investors to give this innovative business a hard look.

Keith Speights (Viking Therapeutics): Viking Therapeutics is a clinical-stage biotech. It currently only has three candidates in clinical testing, with none beyond phase 2 clinical studies. The biotech stock is definitely a speculative pick. But Viking could also be a spectacular success.

I especially like the prospects for the company's thyroid receptor agonist, VK2809. Viking expects to announce results from a phase 2 clinical study evaluating VK2809 in treating nonalcoholic fatty liver disease (NAFLD) and high cholesterol later this year. My prediction is that those results will be positive.

Why am I optimistic? VK2809 uses the same mechanism of action as Madrigal Pharmaceuticals' (NASDAQ:MDGL) MGL-3196. Madrigal also reported great results from a phase 2 study of its drug in treating nonalcoholic steatohepatitis (NASH), which is one of several diseases in the NAFLD category.

NASH is a sizzling hot space to be in right now. A "who's who" of big drugmakers are racing to develop NASH treatments. That makes small players like Viking attractive acquisition candidates if they achieve success in clinical testing with their pipeline candidates.

It's still possible that the phase 2 results for VK2809 won't be positive. Even if they are, the drug could flop in phase 3 testing. However, I like the risk-reward proposition for Viking Therapeutics and think this small-cap biotech stock is a great pick to buy right now for aggressive investors.

Big news on tap soon for this clinical-stage stock

The company's expected to report cardiovascular outcome data for its triglyceride-lowering drug Vascepa before the end of the third quarter, and if data is positive, then its shares could rally significantly.

Prior to its approval, industry watchers thought Vascepa could be a blockbuster drug used to help prevent cardiovascular disease. However, the Food and Drug Administration balked at approving its use in patients with triglyceride levels between 200 mg/dL and 500 mg/dL, crimping its addressable market. Amarin successfully sued the FDA to discuss Vascepa's efficacy in that population with doctors. However, it remains unapproved for those patients, so it has to be prescribed off-label.

Although Vascepa's sales are far shy of prelaunch expectations, they're growing. In Q1, a roughly 25% year-over-year increase in prescriptions helped sales climb 27% to $43.8 million. Soon, Amarin will unveil results from its multiyear study evaluating Vascepa's ability to reduce the likelihood of heart attack and stroke. If the results are positive, then it could convince doctors to use it more widely alongside statins -- a patient population numbered in the millions.

A win could result in sales moving meaningfully higher, but this is admittedly a high-risk stock to buy. There's no telling if the study will succeed. If it fails, then it's anyone's guess if Vascepa's existing sales will continue at this pace or decline. Nevertheless, the opportunity could make it worth buying some shares now on the chance of a win.