U.S. natural gas is increasingly powering the world, and it's delivered as LNG -- a product that's Cheniere Energy's specialty. But Cheniere isn't just one entity, it's two: Cheniere Energy, Inc. (NYSEMKT:LNG) and Cheniere Energy Partners, L.P. (NYSEMKT:CQP). If you think liquified natural gas is a huge opportunity, you need to take a look a these two companies. Here's a primer to help you decide which one is doing more for investors today.

If you prefer to buy dividend-paying companies, then Cheniere Energy Partners, L.P. is likely to be the easy choice here. The partnership offers investors a hefty 6% distribution yield. It owns and operates the Sabine Pass LNG facility, one of the first U.S. liquified natural gas terminals to export LNG. 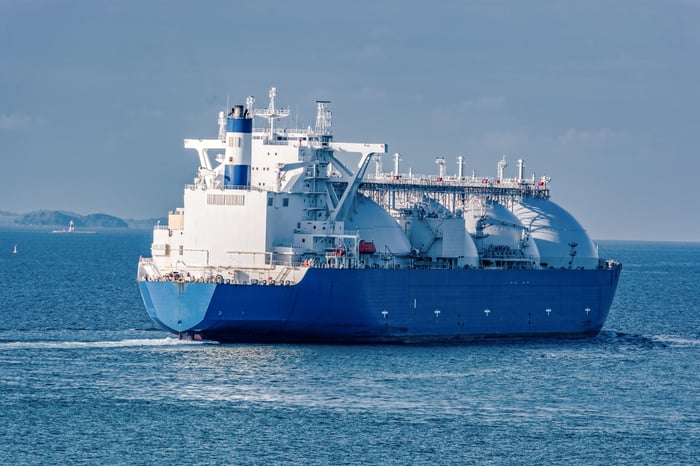 After a long period of construction, Cheniere Energy Partners started exporting LNG from its first liquefaction facilities, known as trains, in 2016. The financial impact was huge, almost like flipping a switch: Revenues went from $270 million in 2015 to $1.1 billion in 2016. Two more trains were completed in 2017, helping to increase revenues to $4.3 billion and pushing the partnership's bottom line into the black. With long-term contracts backing the LNG production and export at the Sabine Pass facility, 2017 is likely to be just the start of a long streak of profitable business.

Throughout the construction phase, Cheniere Energy Partners paid a distribution of $1.70 a year, mainly as a way to keep investors interested in the partnership through the costly construction process. However, with a major portion of the project complete, the partnership increased that to $1.72 in 2017. This year the partnership is planning to up that to a run rate of between $2.20 and $2.30 per unit as it benefits from a full year of operation at the first three trains. That's an increase from previous guidance of $2 to $2.20, driven by strong operating results. It paid out about 80% of earnings in the first quarter, providing ample coverage for the distribution.

But that's not the end of the story. Another LNG train was recently completed, which should push revenues higher still, with 2019 the first year that will see the full benefit of the new facility. And a fifth train is set to be completed in late 2019 or early 2020, providing another boost to revenues. As the next two trains start to produce revenue, Cheniere Energy Partners believes that distributable cash flow will increase to around $3 to $3.20 a unit. Not only does Cheniere Energy Partners offer investors a high yield today, but there's material potential for distribution growth as projects currently in the works get completed. 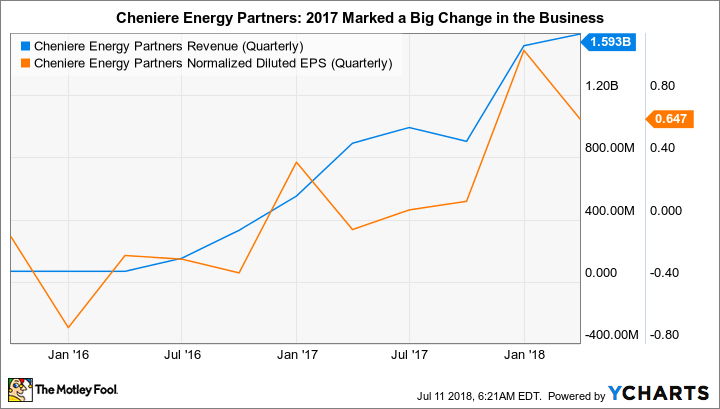 Longer term, there's a sixth train on the drawing board, so Cheniere Energy Partners' growth won't end in 2020 when it has all five of the current trains up and running. If you're an income investor this is a great way to take advantage of the increasing role U.S. LNG is playing on the world stage.

Not quite there yet

Cheniere Energy is the general partner of Cheniere Energy Partners, so it has benefited along with its controlled partnership. But there's a very big difference between the two: Cheniere Energy is building an LNG facility in Corpus Christi, Texas. It has two trains currently under construction that are projected to be completed in 2019 and 2020, respectively, and there is a third train on the drawing board that has yet to be started. And there's additional room for expansion beyond that point.

Cheniere Energy, which is structured as a company and not a partnership like Cheniere Energy Partners, doesn't pay a dividend. The story here is about the growth potential associated with the Corpus Christi facility. The Texas project, however, will be costly, and Cheniere Energy is going to be putting all of its cash toward construction. So don't expect a light switch to flip on Cheniere Energy's bottom line. In fact, even though its top line benefited from its controlled partnership's success at Sabine Pass, Cheniere Energy continued to bleed red ink in 2017. 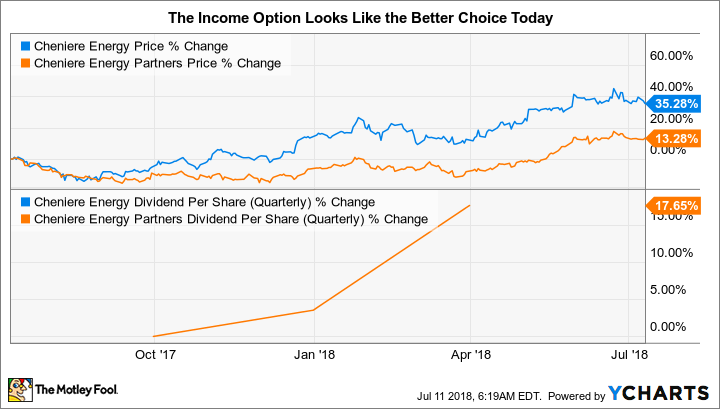 That said, when the Corpus Christi facility gets up and running, that's likely to change. Investors focused on growth might find that opportunity enticing. But fellow Fool Tyler Crowe pointed out earlier in the year that investors are paying around 10 times his estimate for EBITDA after the construction phase is over and all of Corpus Christi's trains are up and running. That EBITDA won't show up for another two or three years. That's a high price to pay for those future cash flows -- and the stock is up around 20% since Tyler's deep dive into Cheniere Energy's valuation. So this is definitely a way to get exposure to U.S. LNG export growth, but not a cost effective way to do it at the moment.

My preference here is Cheniere Energy Partners, L.P. because it is rewarding investors with a hefty distribution and it has growth potential from the additional projects it has in the works. Cheniere Energy, its parent, is still a work in progress as it builds out an LNG facility in Corpus Christi. But since investors are already rewarding the stock with what appears to be a high valuation based on its earnings potential, it's probably best to stick with the income play right now.